An Act of Self-Interest

The Act of Union – a law allowing nobility to profit over the masses. So, what’s new?

The tenets the 1707 Act of Union are as plain as the nose on your face – admittedly part of your anatomy difficult to see from where your eyes sit, unless viewed in a mirror. The Act states unequivocally…..

It does not state in any manner or form two nations shall become one, lose their separate identity, indistinguishable one from another. It identifies two nations from start to finish. There is no statement to the effect Scotland will become part of England, or vice versa.

Two. There’s nothing in the Act about one nation taking second place, the poorer relation, having no place in world affairs. Nor does the Act contain caveats that one nation shall control all power over the other. It makes clear the two sovereign nations shall remain as before in everything but trade, banking, and the rights of peers.

The gross inequality Scotland suffers in most things grew out of decisions made by Westminster that Scotland could not resist have too few MPs to swing votes – a stitch up.

The discussions leading to the Act state clearly that “both nations shall be equal and sovereign”. Hypocritical, power hungry unionist politicians have ever since corrupted the phrase to mean “equal partners” as if they meant it. We have the record to study: the brutally honest, self-interested remark of one English member of parliament the day after the signing: “Good. We have Scotland on the wrack now.” The Speaker joined in the chorus, “We have catch’d Scotland and will bind her fast.” He was right, up to a point.

I am reminded of this as we pass another anniversary of Scotland’s plebiscite to secure genuine democratic representation, to address the glaring, unjust imbalance in power, a movement demanding sound constitutional change in favour of the people, not an elite.

September 18th, 2014, is what I refer to in my darkest moments as Epic Fail Day. 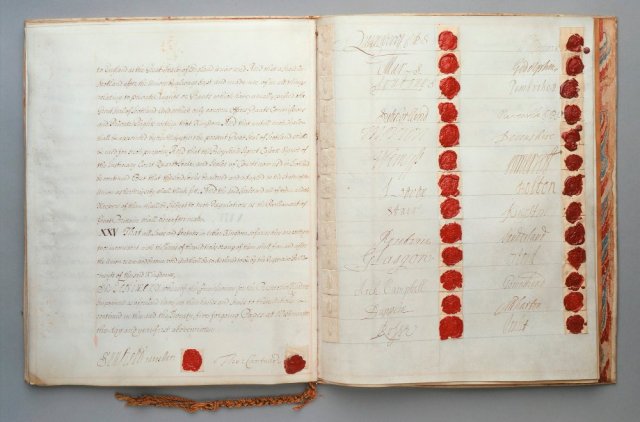 Signatures to the Articles of Union 1707

If you twist my arm I’m sure to say yes

Let no one try to convince you that Scotland sold itself willingly. The population weeping in the streets is well recorded by observers of the day, and by artists since. There were riots in Edinburgh, celebrations in England.

Though Scotland had no debt – debts were piled onto Scotland by England from 1707 – Scotland was vulnerable. It had a population about one-eighth the size of England, the equivalent of Switzerland, and after the massacre at Culloden, no army one could talk of as a resistance force. It had foot soldiers and men on horseback dispersed around the countryside without leadership or the will to come together.

Scotland’s urge is outward – until now

Voluntary migration was underway, but the infamous Highland and Lowland Clearances had not begun, a black episode in our nation’s history akin to genocide by forced emigration.

It was a time of English legal ingenuity that contrived successive laws to strip clan chiefs of territorial power, and turn them into renting landlords. British nationalists claim some did so willingly, but then who would not consider that a compensation when denuded of power, influence and wealth?

A lot of Scotland’s population still lived in our highland glens. Back then we still had large tracts of land where arable farming could support a decent existence, the grassy slopes of more mountainous areas left to cattle farming.

Records show about half of Scotland’s population lived north of the River Tay, not as now, where the Clearances caused the vast majority to live one on top of the other in the central belt, crowded into sub-standard tenements.

The typical Scot was a country dweller, our national poet, Robert Burns, the perfect example. One estimate suggests that in 1700 only five per cent of the population lived in towns. You only need read of the history of our nation to see how Scotland lagged behind more urbanized societies such as those in England, France or even Spain, and was on a par with the Scandinavian countries of the kind we are fond of using as examples to follow for a modern small state.

People forget how much the Scottish population lived off the land, an agrarian society, including east coast fishing communities. The times were ripe for a take-over.

A crime perpetrated on a nation

We are forever reminded that ‘Scotland bankrupt’ was the outcome of the disastrous Darien adventure. This is a fabrication. The scheme was designed to establish an international trading post for Scotland, constructively thwarted in previous years by Westminster conspiracy to block our trading routes and retain them for England. English centres of power warned banks and individuals against investing in the scheme.

The Darien Scheme is the first line of ridicule by ignorant British nationalists and the media. There were three attempts to prop up the colony. Bankruptcy has no basis in historical record. After 1707 England raised our taxes to pay for the loan – it wasn’t a freebie, it wasn’t a grant for “subsidy junkies” – it was a tax guaranteeing the English Treasury would regain what it offered, and with huge interest.

Even so, we only got half the loan, the other half offered in worthless company debentures – England still at war with France was the nation near bankruptcy! We paid for the loan in onerous taxation – a sure fire way of keeping a population indebted and meek. You could argue we paid for the sale of our own country. 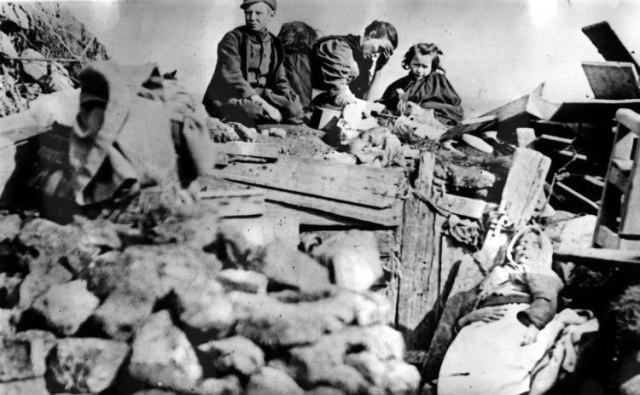 An evicted family, Lochmaddy, 1895. The Clearances continued until 1958, some say longer

Besides the need to refill their empty bank accounts, two things swayed the Scottish nobility to negotiate and sign the Act of Union.

The notion of a Union was not an alien idea. We were in a union of sorts when  Cromwell swept north of the border, putting resistance to the sword, (over 2,000 in Dundee) and swathes of Scotland under English placemen, a practice existing to this day. Our English cousins are apt to overlook that little skirmish in our history, telling us we never had it as bad as Ireland.

The origin of Cromwell’s appearance lay in the Regal Union of 1603 when James VI of Scotland succeeded Elizabeth I to the crowns of England and Ireland. James was eager to go all the way, and in 1604 commissioners from England and Scotland discussed a union of parliaments and a scheme of common citizenship. Anybody who wants to study that period will be surprised by similarities with Alex Salmond’s vision for an autonomous Scotland, one conjoined with England’s Crown and its trade, one without borders.

Despite James’s keen support, the idea foundered. Scottish nobility feared a loss of influence in a London parliament, while English were concerned that the Scots would be favoured in the new arrangement by the presence of a Scottish king and master. There’s little difference between that attitude and today’s English votes for English laws. 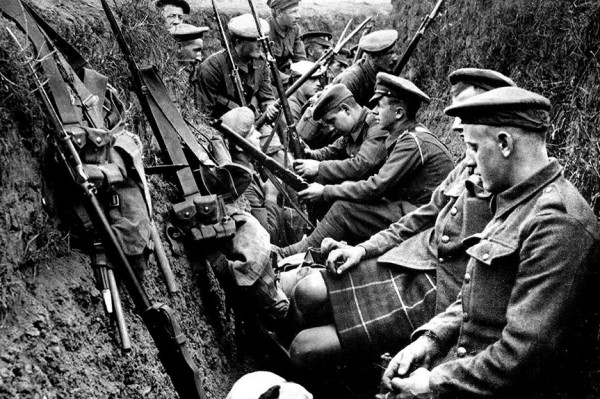 It might seem odd to us in this age that there existed a time when rule from Westminster was considered practically, bureaucratically, and politically, impossible to institute.

Professor Tom Devine puts it succinctly in his history of Scotland: “The difficulties of ruling Scotland from Westminster soon became apparent in the latter stages of James VI’s reign – a Union was enforced between 1652 and 1660 by Oliver Cromwell, but at the Restoration of 1660 and the return of Charles II it was dissolved, to the relief of the majority in both countries.”

The second weakness for Scotland lay in its harvest. We depended on a good crop. A bad harvest meant buying food from others, hence the need to find new avenues of trade and barter. The Damien Scheme was an attempt to alleviate that predicament. To some a union seemed an okay proposition for trade.

It didn’t help matters that several landed estates were devoted to producing substantial quantities of grain for export, not for internal consumption. Scotland could easily feed itself, but our economy was not organised to do that.

There is one other  aspect of our history worth remembering when asking why  Scotland submitted to English rule. On 5 February 1705 the House of Commons in London passed legislation which would alter the landscape of relations between Scotland and England. The Alien Act recommended to Queen Anne that commissioners be appointed to negotiate for union between England and Scotland and, if the Scots did not comply and if discussions were not advanced by Christmas Day 1705, severe penalties would be imposed. [My emphasis.]

All Scots, except those living in England, were to be treated as aliens – no different from today’s spiteful threat Scots will be ‘foreigners’ if independent. And so it was with our exports back in the day, they would be blocked. Blackmail with menace often works.  We heard that familiar refrain when Chancellor George Osborne said “Leave the United Kingdom and you leave the pound”.

Those days are gone.

If anything came out of the national debate over self-governance regained, it was the truth that an autonomous Scotland can be self-sustaining, given that it retains links with other nations. Small nations prosper, none screaming independence is a bad thing.

Let gatherings of the like-minded celebrate freedoms to be won, freedoms to come, and dignity regained, not commiserate about lost opportunities.

Are we we’re so craven, so fearful of tomorrow, we feel governance of our country is not worth fighting for regardless of who suffers from our inertia?

88 Responses to An Act of Self-Interest