Yanis Varoufakis, economist, and one who a damn sight more the most politicians

Waiting for the IMF wolves to circle

I’m allowing the new political situation in Greece a few days to settle into its chosen path before writing about it, but the signs so far are very encouraging.

I’d like to think we are seeing the start of the death of brutal austerity consensus that benefits only banks and the wealthy, but watch needs kept on the reactionary right-wing for signs of counter-attack. But my head keeps telling me the neo-liberal elite will do all they can to bring Greece to its knees.

Meanwhile this headline caught my attention:

“The finance minister, Yanis Varoufakis, arrived on a 1300cc Yamaha motorbike for a meeting with PM Alexis Tsipras.”

Can’t imagine any member of Scotland’s parliament arriving at Holyrood for a major meeting on a cool motorbike though I wish it would happen. (A bicycle doesn’t count.)

Like his boss, Alexis Tsipras, he sports no club tie. It would be refreshing if stuffy politicians ditched the tyranny of the suit and arrived at work in tidy but casual attire. Back in the day in the UK arriving at work in a pair of suede shoes, (termed ‘brothel creepers’) got you sent home and a black mark on your progress report. 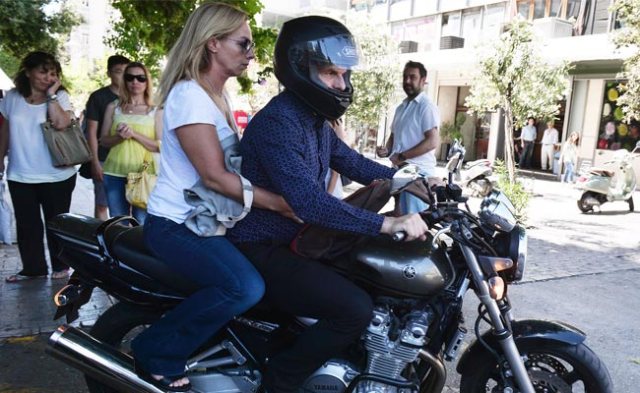 Eschewing the accoutrements of power

President Jose Mujica of Uruguay uses a battered old VW Beetle he has had most of his working life as a modest farmer. He refused a $1 million offer to buy it from some idiot Arab Sheik, anyhow… I digress.

Talk about throwing off the old hackneyed images! Amazing.  I’ll post a photograph of Varoufakis on his motorbike if I find one. (See sister essay ‘Varoufakis Rocks!’)

Tsipras, and Varoufakis, an internationally respected economist, are conferring ahead of their meeting with Euro group president Jeroen Dijsselbloem. If any proof were needed that Greece has entered a new era, this was it. Long may it last.

To my mind it reconfirmed a growing admiration Yanis Varoufakis is the coolest politician around, though it doesn’t escape my alarm on a motorbike anybody is an easy target for Greece’s right-wing assassins! Escapes down very narrow alleys happen only in movies.

A politician liked by the people

Morbid thoughts aside – yesterday, as he arrived for his first day behind his desk at the finance ministry, he was mobbed by mobile camera wielding schoolgirls.

You just know that right-wing stooges in the mainstream press will exploit that to create a spurious debate about the intrusion of ‘celebrity’ status into serious politics, ad nauseam, as if somehow, there has never been a politician anywhere on the planet that attracted celebrity status. Here, they are burying Churchill for the umpteenth time to remind us of imperial England’s power and glory.

Things are looking up

Think of the press scorn if Varoufakis had arrived in a black Mercedes 600 to talk about austerity, official flags flapping from the bonnet, police guards on all sides!

“We are going to destroy the basis upon which they have built for decade after decade a system, a network that viciously sucks the energy and the economic power from everybody else in society,” Varoufakis told Britain’s Channel 4 television.

Alexis Tsipras, prime minister of Greece. He might not be able to resist the ransom of Jean-Claude Junker and the European Bank

How strong willed is Tsipras?

The emergence of a political cool dude comes amid concerns over steps by Tsipras to halt austerity measures following Syriza’s election victory. European leaders have insisted Greece must meet its debt obligations.

Tsipras has said he wants to renegotiate the terms – but insisted there will be no Greek default, which is feared may push Greece out of the eurozone.

Greece has endured tough budget cuts in return for its €240bn (£179bn; $270bn) bailout, negotiated in 2010 with the “troika” – or what I call the list of villains: the EU, International Monetary Fund, (IMF) followers of the Chicago School of ‘Shock’ Economics, neo-con graduates, and European Central Bank (ECB).

Greece’s economy has shrunk drastically since the 2008 global financial crisis, and high unemployment has thrown many Greeks into poverty. Strangely, Greek bank stocks edged up on Thursday a day after dipping sharply as the government shelved privatisation schemes required under bailout terms.

Here’s how the outgoing welcome the incoming:

To the victor the spoils? Not in Athens, where the new prime minister arrived at his official residence on Monday night to discover that computers, paperwork and even the toiletries had been removed by the outgoing administration.

After he was sworn in Alexis Tsipras found himself inside the Maximos Mansion without basic necessities. “They took everything,” he said. “I was looking for an hour to find soap.” Varoufakis looks the man to reinstate the soap, but not at extortionate IMF prices.

This essay was followed by ‘Enemies of Greece’s Reformation.‘

10 Responses to Greece – One Cool Dude