The Curious Case of Craig Murray

The dilemma Craig John Murray found himself in is not an issue I planned to write about – his failure to pass an SNP vetting committee to reach a selection list for election to parliamentary office – and in fact I will steer clear of it mainly because he is a man quite able to defend himself.

I’m troubled by the way his reputation is traduced by a few on social websites devoted to Scottish political topics. I must begin making clear I do not know the man, have never met him, and so do not feel qualified to judge whether he’d make a good or bad parliamentarian for the SNP at Holyrood or Westminster. All I can say is, he has the right to try and to fail without condemnation from the screeching Greek chorus.

Anybody who wants to make their own assessment should read his blog and the assorted comments appended to it. But I know slander when I see and hear it. And scurrilous accusation to plain libel there is on the Wings site. The vituperation is, however, balanced by a number of supportive comments of his political abilities and experience.

Who is Craig Murray?

For those unfamiliar with his accomplishments – which includes myself, it’s only right to offer readers a little of his curriculum vitae. A former Foreign and Commonwealth Office official, Murray was ambassador for Uzbekistan from 2002 to 2004, later Rector of Dundee University, 2008 to 2010. His book, ‘Murder in Samarkand,’ was adapted into a radio play by David Hare. A film version appears to be shelved. The job of writing the screenplay  was first offered to my late friend, the novelist and ardent nationalist, Frederic Lindsay.

Murray was invited to stand as a parliamentarian by SNP admirers. Knowing the SNP a broad church of the apolitical, liberals, Tories, communists, and socialists, voters seemed impressed by his past attempt as an independent candidate who stood against Labour’s flaky Foreign Secretary, Jack Straw, in the UK General Election of 2005.

Here is the curious thing – Murray did not get past the SNP’s vetting stage.

Too honest to be a British ambassador

He styles himself ‘author, broadcaster, and human rights activist.’ The latter description holds water because he lost his job as ambassador when his protest of torture on his watch became public.  Wikipedia states it thus: ‘While at the embassy in Tashkent he accused the Karimov administration of human rights abuses….. Murray complained to his [senior colleagues] …. that evidence linking the Islamic movement of Uzbekistan to al-Qaeda was unreliable, immoral and illegal, and….. was obtained through torture.’

Murray went on say, “There is no point in having cocktail-party relationships with a fascist regime.” He was also bold enough to write to President George W. Bush to complain. Murray rightly condemned  torture and rape in his jurisdiction, officially considered acceptable collateral damage in the pursuit of establishing a democracy. His silence was preferred. Charges against him were dropped but he was reprimanded for speaking out.

In time he suffered a pulmonary embolism and was flown back to London. Fragile health is the one reason I would question anybody keen to take on the ferocious tactics of British establishment.

We can conclude from his vicissitudes that Murray has a conscience, a remarkable thing for an Englishman working in the Foreign Office. As a whistleblower he paid the ultimate penalty, banishment to the labyrinths of internet Chinese whispers.

Once you get by the off-hand, mawkish remarks – ‘He applied for a job and didn’t get it – welcome to reality’; and the clichés, ‘Why throw your toys out the pram?’; and the silly, ‘Does the SNP want obedient Yes men?’, you’re left with remarks of sly condemnation. Here are a few selected with my analysis attached:

By those examples alone Murray was defamed before he entered the interview room and afterwards. Incidentally, the examples I give are all used by internet trolls.

The worst of the defamation slides repulsively onto Murray’s sex life. By his own admission, he patronised pole-dancing clubs in Uzbekistan; the stuff of every spy novel.  This knowledge is grasped with glee by the prurient to show their disgust for all the awful things they enjoy guessing he might have got up to in his private life. Is there a lonely, disillusioned government official who has not found himself in such a place, drink in one hand, and goodness knows what in the other?

In reality Murray discovered passion late in life, divorced his British wife to marry an Uzbek citizen bringing her back to Britain to live. 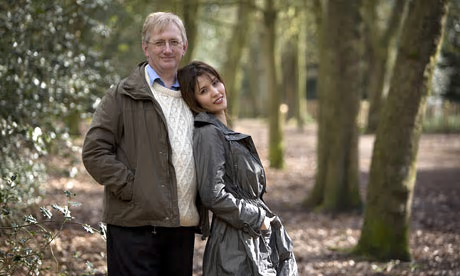 Murray and his wife, Nadira

Loose Cannons – and other naval sayings

There is plenty of comment alluding to Murray’s alleged disposition as a ‘maverick,’ less complimentary described as a loose cannon. The most successful ‘loose cannon’ in the SNP is Alex Salmond, a man of high achievement suspended for his membership of the 79 Group, a socialist-orientated inner cabal disliked by the SNP party, but who was reinstated a month later, and became Vice-Convener for Publicity, surely a hefty dose of irony for someone once regarded as uncontrollable.

Of his failure to pass the first hurdle Murray is accused of naivety for writing of his profound disappointment in his blog, as if somehow he’s not entitled to wear his heart on his sleeve, or analyse his failure.

One of the wisest comments on Wings puts the case for discretion and good sense succinctly: the ‘reasons for a person being refused a place on a selection list for election should not be the subject of idle speculation.’

The moral of the case

The moral of this tale is simple: never put anything in writing about an individual that you would not say to their face. It isn’t what one writes in a reference about a candidate that matters, it’s what you leave out that speaks volumes.

Murray has been accused of being a political opportunist – it’s a strange kind of opportunism that gets a man sacked for speaking out against injustice, and dismissed again for speaking honestly. One would suppose his insider knowledge a great asset to any political party intent on securing power. What a missed opportunity for the SNP.

63 Responses to The Curious Case of Craig Murray