Of Tarts and Old Farts

Brassiere entrepreneur and former model Ms Michelle Mone is created a peer of the Realm. How preposterous! It can only have been awarded for brazen self-promotion. She is the unelected baroness who called an elected politician “an SNP moron”.

Better Together for sales

A devotee of the me-first, Better Together, anti-democracy campaign during Scotland’s Referendum, Ms Mone’s peerage presages the anointing of other democracy betrayers from that camp. (Almost all have been knighted or given earldoms.)

It is fitting she joins the politburo of unelected old tarts and farts, so out of touch they might as well inhabit Planet Kepler 452B. David Cameron answered the clamour for reform by creating fifty new Lords and Ladies. Thirty five are Conservative peers.

Ms Mone will feel at home among the scions of superannuated aristocrats, uber-rich party supporters, and government placemen and women.

Mone is chiefly known for having introduced silicone into a bra to make it more comfortable rather than silicone introduced direct into mammary glands as a breast implant. Thinking outside the box, you could say. The inside skinny is, it’s not her invention, but the European franchise bought at a Florida convention by her husband.

It enhances small breasts, surely a benefit if it gives women confidence. (That’s a whole other debate!) Still, you can argue she created Glasgow’s own  ‘Silicon Valley’. I suspect the disparity between the price of an Ultimo bra and its supportive qualities rises in direct proportion to the size of the client’s breasts.

It made her very wealthy and brought out the exhibitionist in her. She acquired the propensity to divest herself of her garments at the click of a camera. Controversially, she introduced her daughter, Rebecca, to the charms of lascivious men as the key model for her underwear. All publicity is good. Mone is Scotland’s very own Sarah Palin.

Mone detests all forms of nationalism

In politics she is another J.K. Rowling. She told Scotland to vote against its best interests. whereupon she quit Scotland. Rowling has not entirely abandoned us but like Mone her wrath knows no bounds told she does not represent Scotland.

On innumerable occasions Mone expresses contempt for Scotland’s elected government, but especially the advent of horrid nationalism. She goes to immense lengths to avoid being tarnished by nationalism, wrapping herself in a Union Jack flag for protection.

The quick way to become a high-level law officer without getting elected with power over everybody is to denigrate your fellow countrymen, proclaim your self a diehard Tory, and live life as a clothes horse. What does that do for the cause of women’s rights?

The cult of the mediocre

That she sold her company should not cause readers any alarm. She sold it to lingerie retailer MAS Holdings, owner of Speedo swim wear better known as ‘budgie smugglers’, with head offices in those tax-respecting havens of Colombo and Sri Lanka. That’s what successful big business people do these days. They cheat the tax man. And you and me.

To hell with the local economy and community. Take grants and awards from the taxpayer  – welfare to you and me – to pay for staff, and then sell out to the highest bidder casting to the winds hard-working staff that helped make the company successful.

Ms Mone deals in fakery of one sort or another. She admits to faking her qualifications early in her career to obtain a marketing post. Few took notice of her other than to note her bra company in Glasgow was over half a million pounds in the red in 2014, and she was caught bugging employees to “test their loyalty.”

Ms Mone and her former husband exploited employee benefit trusts to reduce their tax burden, a system denounced by chancellor Osborne – not what one can describe as ‘giving back to the community’. Their company was not as so often depicted, a mass employer in Scotland. 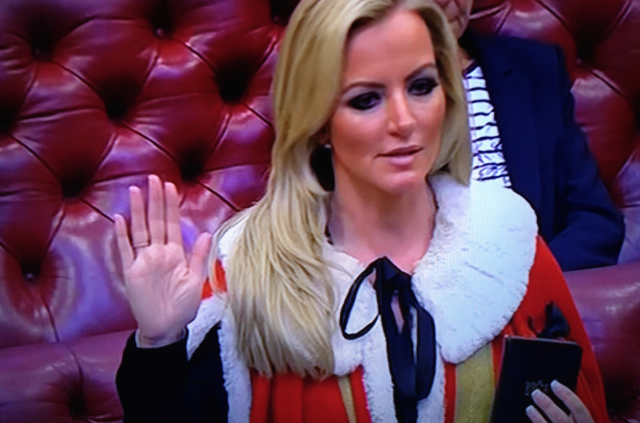 As close to Barbie Doll as a woman can get

Her company, MJM International, was reputed to be worth twenty million at the height of its fame, run back in the day by her as model and by her husband as administrator. For whatever reason her husband found the company’s designer more interesting than the accounting books and so came the inevitable divorce. (If readers are beginning to feel this back story reads like something from Hello magazine the fault lies in the nature of Mone’s career trajectory and depth of character.)

If only she had displayed other characteristics than demeaning women and uttering banalities about Scotland going down the drain, you could at least defend her to a degree. All told, she sells products that exploit women’s anxieties.

Women in London of a certain wealth and taste buy their underwear from Bravissimo, or from the Royal lingerie retailer, Rigby and Pellar, dear old Marks and Spencer having long-lost its allure for ubiquitous underwear.

Rigby and Pellar, for example, have your order on computer and can ensure your next is as bespoke as the last. (This site prides itself on its research!) Presumably Mone stands to make a bob or two (almost typed boob) selling her bras to old farts in the House of Lords who enjoy wearing women’s underwear and tights.

Her maiden speech (not a euphemism) is not one to cherish.

The effects of time and gravity

In time, like the rest of us, Mone’s curvaceous femininity will gather an excess of H2o and gravity. To garner attention will be difficult when she deteriorates into an old fart herself. Her current attitude reminds me of the anger of playwright John Osborne.

“The woman who sneers at you from the pages of glossy magazines, the model ideal of superb meanness, a long slink of classical contempt, begs for defilement.”

Well, perhaps that’s going too far. Osborne disliked women. You can argue Mone has risen above ‘the glass ceiling’, but I know independent minded, successful women who inhabit the same male dominated world that are successful without resorting to exhibitionism and tawdry tales of daily life ‘struggling’ with the onerous duty of parties and functions in the upper echelons of society.

If she is being manipulated by men, and there is some evidence for it, she should speak out. Playing the victim of cybernattery is cheap and not cheerful. She’s happy to repeat over and over , ‘if at first you fail, try, try again’ – but not for independence!

Don’t forget, this is the woman who said, “I believe children are our future” and then voted to slash child tax credits. But all is forgiven for now she lives in a mansion home in the Isle of Man tax haven and according to her publicity it is absolutely “fabulous.”

Mone says goodbye to her life of bleak poverty in Glasgow

Fashion for the rich

Personally, the fashion world leaves me cold. Only Scotland’s Alexander McQueen caught my attention, and only because he was so eloquently and powerfully subversive. In the fashion world Mone is the equivalent of a squirt of Pledge.

The truth is, Victoria’s Secret is really starvation and liposuction.

Mone sold out her Scottish roots for nothing more than daily appearances in the tabloid’s gossip columns and lots of holidays abroad in hot climates. One hopes more like her will follow her example … and leave Scotland.

PS: Ms Mone’s truly awful business speech praising (the corrupt) HSBC, a bank that bailed out her debts, has been removed from YouTube, but if readers care to scroll through the PR puffery of her there exists still the painfully embarrassing moment she picked up a Vietnamese man in her arms thinking him a little boy.

PPS: IN 2018, now Baroness Mone, she was criticised by newspapers for attending the House of Lords a mere 19 days out of s possible 157, including a crucial debate and vote on leaving the European Union. Her wish to ‘play a full and active part in your Lordships’ requires some, erm, definition.

18 Responses to Of Tarts and Old Farts