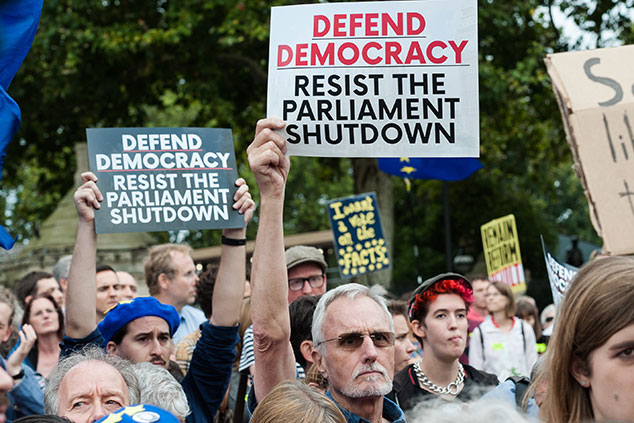 In a week that saw an over-confident but predicable attack on the few democratic mechanisms remaining at Westminster, attacks led by an unelected Back Door Boris and his Tammany Hall gang, including underboss hitman Dominic Cummings, who, it is claimed, masterminded the shut down of Westminster, it is helpful to reflect on the history of democracy in the United Kingdom and the state it is in now.

It can surprise those dismissive of England’s colonial ambitions to learn the earliest rebellions, people fighting against the removal of human rights, took root in England. While there is ample evidence to claim rebellion began early in Scotland in Robert the Bruce’s time, when Scotland’s taxes went south and Wallace’s body parts came north, his unlawful killing inflaming the populace, it was England that saw the people demand more freedoms. I am referring to rebellion led by ordinary people against kings and barons, rather than rebellion led by a monarch against a monarch.

In the last four decades – since the neo-liberal backlash began – UK centralist parties have been waning and may be mortally wounded. Old school Scottish Tories and the self-harming Labour party which long ago became the UK’s second Business party indistinguishable from the Tory party, were both almost eliminated, their place filled by ideologues and extremists. Intolerance manifested itself in UKip and the Brexit party.

One need only look at some of their MPs from state schools who, as MPs, voted against increasing welfare benefits, shifted pensions to age 75, and blocked sanctuary for refugees. In fact, the last UK centralist party is Scotland’s SNP party; ‘centralist‘ defined by a party embracing socialist polices and some capitalist systems, the last party of that ilk unless you include Plaid Cymru in Wales, a social democratic party not yet in power.

What we see around us is illiberal democracy, that is, a democracy greatly restricted, close to or actually full-blown authoritarian governance.

We might feel we have democracy at a local level, getting our local council to fix things, writing a letter to a local store asking it advertise Scottish produce as Scottish not the generic ‘British’, are examples, but the higher up the scale you go the less democracy exists, and that’s where it counts the most.

Watching the past leader of the Tory’s Scottish branch, Ruth Davidson dissemble at her press conference over her reason for standing down, having sworn she expected to be Scotland’s next First Minister, and you can see why the electorate are effectively disenfranchised by proroguing the Westminster parliament when even Tory politicians are frozen out.

She said nothing of the curtailment of Westminster only of Brexit without a deal. In this she is just another dictatorial Tory. For all her ability to communicate well a simple message, one without substance, Davidson was happy to embrace neo-liberal extremism to its fullest degree with the exception of Leave. Backing the wrong horse – I almost said buffalo – also contributed to her undoing. Tory supporters in Scotland back isolationism from Europe, three to one.

Worth remembering that democracy, from its inception, has always been under attack, highly contested, feared and denigrated by the Right, in particular at the sight of any surge in the fair distribution of wealth and greater democratic rights.

Hence the onslaught by the British state at the thought of Scotland resuming nationhood, and the flood of false statistics and belittling of an entire nation, depicted unjustly and insultingly as a basket case that cannot exist without its neighbour’s goodwill, a clear case of beating your loyal dog to remind it who’s boss.

In England there were those who did not want to be ruled by landlord, monarch or parliament, preferring people govern themselves, upsetting the English principle that parliament is sovereign.

The mid-seventeenth century saw a revolution in democracy which resulted in what is termed the ‘glorious revolution’ of 1688, or the ‘bloodless revolution’, though it was not bloodless in Scotland and Ireland. It saw the deposition and subsequent replacement of James II and VII as ruler of England, Scotland and Ireland by his daughter Mary II and her Dutch husband William III of Orange.

Religious complexities aside, the event changed how England was governed, giving Parliament more power over the monarchy and planting seeds for the beginnings of a political democracy. The king and queen both signed the Declaration of Rights, which became known as the Bill of Rights.

The Bill of Rights document acknowledged several constitutional principles, including the right for regular Parliaments, free elections and freedom of speech in Parliament. In effect, the monarchy in accepting the Bill of Rights accepted more restrictions from Parliament than previous monarchs.

The Royal prerogative was broken, particularly over the profits made from the slave trade, and which led ultimately to the abolition of the slave trade in the Act of 1807. I should add here that Scotland was the first to battle against the trade, banned in Scotland in 1778, its main advocates joining forces with their English counterparts to argue the case in England’s courts.

The path for activists of democracy

At the same time this opened up the path for many individuals to become activists, printers as liberal pamphleteers, a free press unencumbered by self-serving ownership, and advocates favouring universal education, better health care, and most important of all, democratisation of the law.

This explosion of free thought put the fear of death into the powerful and the rich. As one critic wrote, “the masses preach seditious doctrine to the people, and aim to raise all manner of revolt against the highest order, all lords, gentry, minsters, monarchy, rich and peaceable men in the kingdom”.

Democracy was seen by the hitherto controllers of society as the Devil incarnate, in the same way as the right-wing view socialism today. It had to be curbed! On the other hand, the people wanted to be ruled by ‘countrymen like ourselves’, a cri-de-cœr replicated in Scotland’s patriotic wish to restore self-governance.

The hypocrisy of politicians

Today we see English hypocrisy manifest in those who celebrate courageous protesters of the past who wanted parliamentary reform.

I can cite two best known examples: the crowd cut down by mounted Yeomanry at the Peterloo Massacre, Petersfield in 1819. And later there was the Tolpuddle martyrs in Dorset in 1834, convicted of swearing an oath to their local representative group, an early form of unionism, the men given sentences of seven years deported to Australia as common convicts for expressing anger that their wages had been lowered – a phenomenon with us this very day. They were pardoned and brought home after mass street riots and a petition singed by over 800,000 people. People power does get results!

Contemporary celebrations of those uprisings are made annually today by hypocritical politicians enacting Bills to reduce the power of unions and withdraw democratic rights.

It was the distinguished French economist Thomas Piketty who wrote, “An economy that fails to supply growth for half its people for an entire generation is bound to generate discontent with the status quo and rejection of establishment politics.”

In Scotland the people are sovereign but a foreign visitor to our shores would not presume that was the case observing the way Westminster and the UK Supreme Court are able to walk over Scots law (as enshrined in the Treaty) and liberty, ignoring Scotland’s very existence. Nevertheless, the neo-liberal push to gather up civil rights for their own purpose is being challenged here, Europe and in the USA too.

The neo-liberal creed that avers we have been granted too much democracy and it must be reeled back in finds the populace, a large section of it, has had enough of trusting its institutions that say – as the chairman of the Brexit party, Richard Tice MEP, said this day in a radio debate – “You’ve had your say. You vote once every four years”, or put another way, that’s your limit of participation.

Tice called this ‘democracy at work’. His remark is a modern day equivalent of the 18th century dismissal of a free society: “The masses cannot know. They must only believe.”

A free Scotland is the only way to secure the rights of the people against a brutal, cold, xenophobic, tax shy, right-wing counter-revolution set against democracy. In prison one leader of the Tolpuddle martyrs, George Loveless, scribbled some words that could be Scotland’s slogan for its separation from Westminster’s corrupt and unjust domination: “We raise the watchword, liberty. We will, we will, we will be free!”

2 Responses to Shutting Down Democracy