Once Upon a Time – a review

Once Upon a Time in Hollywood is reported Tarantino’s last movie, his ninth. On the strength of this one he probably is wise walking away. This one is a retread. Now there is talk of a tenth. I hope it has more substance.

Every Tarantino verbal trick and tick and experimentation with cinematic convention is here. There’s the veering off into sub-stories, too much exposition, split screens, long monologues of introspection, black and white old newsreels, voice-over narration that happens only once, visual and verbal humour, obsessive care over period detail, massive self-indulgence and of course, a bucket of bloody violence.

It wouldn’t be a Tarantino movie without the pools of blood and blood in a pool. At two hours and fourteen minutes you could take the first thirty minutes and the last thirty, glue them together and still have a film that works.

At some time in their career almost all Hollywood writers, film or television, try their hand at a story about their workaday life in the city of angels. Hollywood feeds off itself. Tarantino has made this one his. I rate it his least interesting. Whether or not Once Upon a Time is his swan song is debatable. He will miss the hurly-burly of creative activity.

Tarantino’s best skill is in creating scenes for two guys indulging in frothy banter, writing dialogue for women less so, a lot less so. For great roles for women cinema goers must turn to auteurs such as Spain’s Almodóva. But in this case, both actors are almost outshone when a ditzy member of the infamous Charles Manson ‘family’ enters the scene, Pussy (Margaret Qualley) a former ballet dancer who puts her dance training to good use. Weirdly, she gets more lines than lead female Margot Robbie, she playing the doomed Sharon Tate.

And yet, and yet the two main stars Leonardo DiCaprio and Brat Pitt make good chemistry, DiCaprio as a second level television actor Rick Dalton, and Pitt his stunt double buddy Cliff Booth. They are never anything less than a delight to listen to and observe. DiCaprio is the earnest if doubting actor, Pitt his conscience and his therapist.

I’ll start at the end. There is something of an act of revenge in the story as written. The last scene is the gory scene. It could be Tarantino flame-throwing his critics. He ties his plot to the infamous Manson murders at the home of Sharon Tate and her unborn baby, but takes us by surprise with a neat twist. (Am avoiding spoilers.) At the point you are convinced the film will end in gross bad taste it doesn’t. What it ends with is another Tarantino signature, the pornography of graphic violence – on women. You struggle to accept it, justifying the scenes because they involve nasty women of loose morals brainwashed by a mad man.

As the final act of Once Upon a Time rolls, the Rolling Stones’s “Out of Time” plays. Mick Jagger sings. “My poor old-fashioned baby.” surely some sort of symbolic message, but it’s lost in the violence happening on the floor. The song is a lament for days gone by, but also a warning to the old that the times are changing. If that’s what Tarantino is saying in two hours and fourteen minutes it appears as an afterthought.

At the time the film is set Hollywood was undergoing one of its periodic changes of direction. Small, adventurous but under-capitalised independent film companies were popping up everywhere. They showed how to make a good film on a shoestring. So many companies became successful that the big studios bought them up as their low-budget arm. Fox Studios and Fox Searchlight is one obvious example. You can ask Pixar now part of Disney’s empire how that happened, or Harvey Weinstein’s once preeminent Miramax. Money is king in Hollywood. Everyone can be bought. Hollywood saw box office profits so it gobbled up the loose ends and returned to its old ways.

Beyond the imaginings of copycat reviewers who believe the story is laden with nostalgia and symbolism, the film is classic Tarantino pulp fiction, now and then descending into soap. In a scene were Dalton and Booth take the Mickey out of an old Dalton television western could sit comfortable in River City.

Dalton is made of jelly but acts macho, prone to fits of self-pity. By contrast, Cliff is a full-blown sadist. Looking indistinguishable from a Robert Redford in his heyday,

DiCaprio is at his best when he loses the rag, yelling at himself for his stupidity, tearing his trailer apart after forgetting his lines on set. He gives us the vulnerability of the actor, an unlikely trait in a Tarantino anti-hero. When his too-old-for-her-years eight-year-old co-star Trudi (Julia Butters) validates his performance (her role a clunky send up of contemporary feminism), Dalton’s expression cuts through his trademark hyper-masculinity and he weeps. He is always teetering on the brink of a nervous breakdown.

Pitt as Cliff Booth is the more interesting character. He likes to drive his beat up old VW fast and pick up girls. His career as a stunt double takes a tumble when he throws a vain, strutting martial arts devotee Bruce Lee (Mike Moh) smack into the side of the producer wife’s car. I wondered if the door mock-up was cardboard so realistic is the stunt, but lots of things in this film are cardboard. The skeleton in Pitt’s life is the small matter of the death of his wife. He killed her on a boat and got away with it, perhaps a sideswipe at Robert Wagner and Natalie Wood sea trip. He lives the life of a perpetual adolescent.

There is not much to say about the women so shallow are the roles they are given, hooker, ingenue, secretary, psychopath, screaming potty-mouth middle-aged harpy, ad nauseam. Margot Robbie manages to look exactly like the ill-fated Sharon Tate. She masters the empty smile, all gleaming teeth and dewy eyed, about all she is given to do; smiling in cars, smiling in the street, at home, or watching her self on film in a local cinema. She smiles, she laughs, she wears cute hippie outfits.

Similarly reduced in substance is the character of Pussycat (Margaret Qualley) a hippie in Manson’s camp who hitch-hikes a ride with Booth talking to him in sexual innuendo. However, as mentioned earlier, Qualley is an actor to watch. She adds layers to the role that is a Tarantino sketch. From the women there are lots of dirty bare feet placed close to the camera lens. Is this Tarantino goading his critics again about his foot fetish?

Other than borrowing the best from past masters and mixing their techniques in a crucible to create a mismatch usually called plagiarism, I’ve never known what post-modern means, nor when post-modern ends. Tarantino has had the tag of post-modern for two decades now, all rather boring and old-hat.

I’ll take a stab – For a better part of its running time, Once Upon a Time in Hollywood is post-postmodern. It trudges along aimlessly painting a leisurely portrait of middle-age crisis and dependence. There’s not much more to see, but for most of its length it is entertaining depending on your political viewpoint, acceptable thanks in part to comfortable multiplex lounge seats. As a work of cinema it is uneven yet it hangs together, a constant paradox in Tarantino’s oeuvre.

One other role to mention, that of a guest cameo from Al Pacino as Marvin Schwarz a Jewish talent agent, wise and clever, rebooting Dalton’s career as lead actor in spaghetti westerns, a nod to the career of Clint Eastwood. “Not ‘Schwartz’, he corrects Dalton, Rick placing the wrong emphasis on the ‘rz’, “The name is Schwarsssss.”

A New York Italian playing a Hollywood Jew is a nice contradiction; both are at home working in movies. With his sixties owl-like spectacles, I know exactly which renowned agent Pacino is mimicking. Holding a script under my arm entitled ‘Jerusalem Regained‘ a similar Hollywood honcho grabbed it, handing it back disappointed when I advised him it wasn’t about Jerusalem or the Golan Heights. 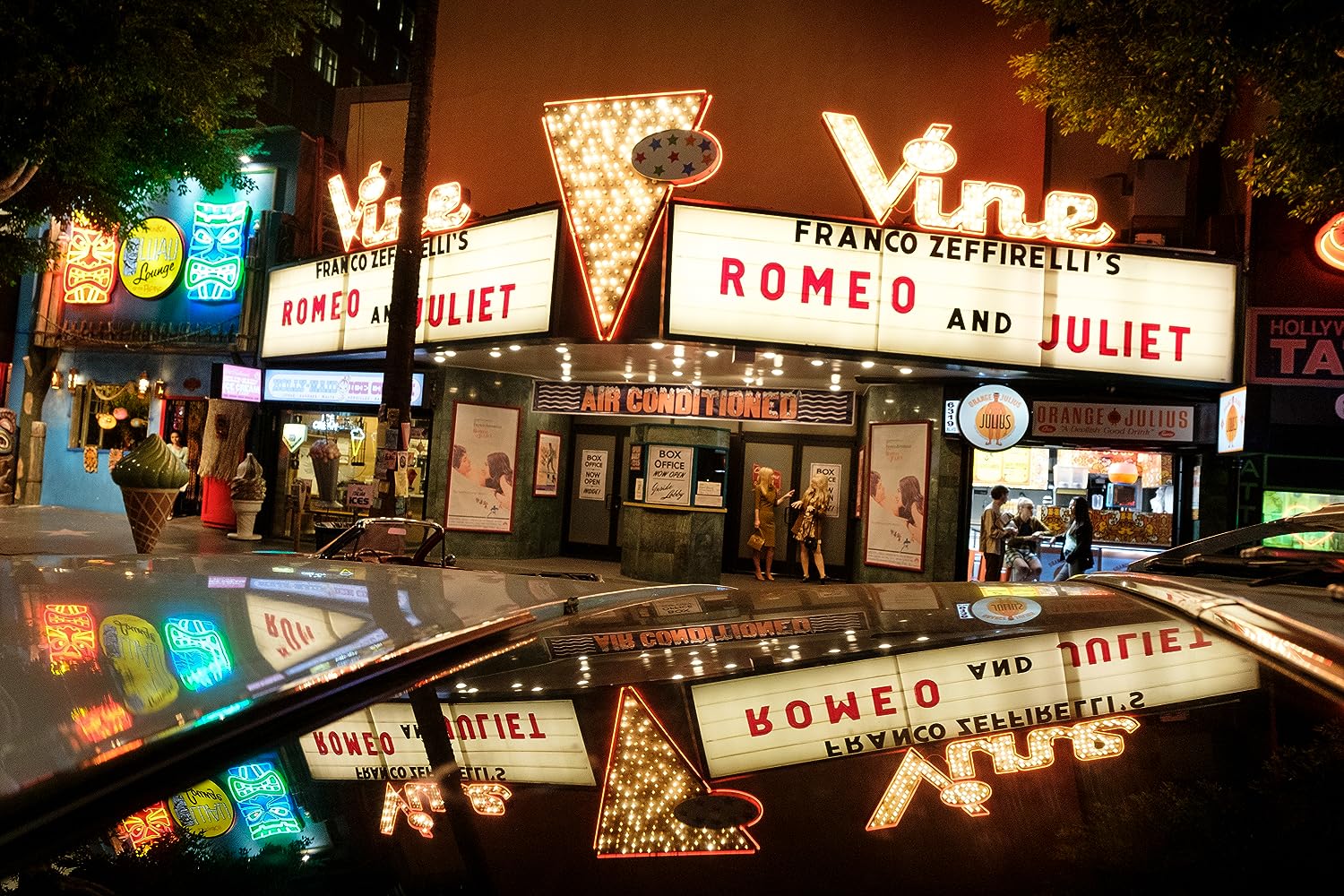 Any film about my second home holds interest for me. I look out and name street I know, restaurants and cafes. Cinematographer Robert Richardson keeps a pleasing wide angle lens on most things, blurring the LA background when it has places the production crew could not dress, and art direction John Dexter ensures nothing I saw looked out of place or time. The plethora of stunts embrace a team of stuntmen and women, a list almost longer than the cast and extras. Music is pop and rock of the time, there’s no composer.

The film is crammed with movie maker inside jokes. Outside enthusiasts of the craft or people like me immersed it its minutia, I can’t see the general public understanding them all. If the cinema goer is a feminist they won’t much like what happens to the women, if a cowboy western fan, the visits behind the scenes will delight.

Once Upon a Time in Hollywood is well directed shot by shot but hellish hard to accept its conceits. Severe critics accuse Tarantino of having only three signature themes: loud soundtracks, macho men gone wild spewing out the n-word, and gratuitous depictions of violence against women. Only the n-word is missing from this one.

4 Responses to Once Upon a Time – a review