An occasional series on great Scots unjustly ignored or forgotten

Empathy for others is one of humankind’s greatest qualities.

There are those among us, ordinary down-to-earth folk, modest in ambition and material possession, that make a life altering decision to sublimate their ego to help others. The occurrence of selflessness is common to thousands of us every day in small and large gestures of generosity. At the far end of the scale, those who give up years of their life to care for another person less fortunate than themselves are heroes given little credit.

Some decide to look after an infirm parent or sibling; some do it for another’s child as my guardian did for me. For those people it incurs years of caring, compassion rewarded with little or no income to help the day along. The dedication often means years of their life limited in scope, chances to develop to the full lost, but they do it for the good of another. Then there are those who are aware the sacrifices they make will call for great courage. One such person was Jane Haining.

Jane Haining was a Scottish missionary who died at Auschwitz after refusing to abandon Jewish children in her care in the Scottish-Jewish mission school in Budapest. She had gone there to help administer a group of orphans. There is some second-hand evidence she dismissed one of the German staff who at first refused to leave and when he did eventually leave the building decided to take his revenge. That same evening he alerted a Gestapo patrol to her return from shopping in search of food. Stopped in the street, demanding to see her papers, she was arrested for harbouring Jewish children.

By any reckoning she knew the penalty but refused to save herself. As research reveals she saved other Jews from death at the hands of Gestapo by helping them reach the UK.

A farmer’s daughter from Galloway in south-west Scotland, Haining’s mother Jane senior died in childbirth complicated by pernicious anaemia when Haining was only three. John, her father, took on the responsibility of looking after his three daughters, which together with keeping the farm going, must have been an onerous task. On the other hand, his home was quite well-to do in those days, six rooms and windows in each, at a time when windows were taxed, and John had a household help to ease the situation.

Haining and her three sisters walked to primary school a mile away, an activity frowned upon today, children protected from walking anywhere by parents driving SUVs. Scotland had some fine primary schools in every Parish, a tradition since 1530. The one in Dunscore was blessed with glowing reports from school inspectors. The welcoming atmosphere must have given young Jane a feeling of well-being, learning and playing among school friends in an institutional setting, something that probably helped form her opinion of charity schools in her later career. The parish library – another advance in Scottish society – gave her a taste for books.

An intelligent, bright pupil, Haining blossomed, learning to read by age seven. According to school friends, she matured into an individual with strong religious beliefs, a ‘little bossy’, someone who would ‘take no nonsense’.

Sunday school and Bible readings were mandatory. That inculcation may have created in Haining an unquestioning belief in the Old Testament and the martyrdom of Christ. The death of her mother leaving her father to do the caring had to be a formative event in her life. In addition, she would be familiar with the story of the Wigtown martyrs, two young girls and a woman in her sixties who refused to swear an oath to the James II. Brought before a Scottish Episcopalian court in 1685, they were sentenced to be ‘tied to palisades’, fixed to the mud flats in the tidal channel of the River Bladnoch near its entrance to Wigtown Bay as the tide rolled in and drowned them. Scotland’s political subservience to a foreign power breeds absolutists.

For rural life, life was changing. The majority of Scots lived and worked in the countryside, in villages and settlements, Dunscore one such community that never surpassed 800 people, but the movement gravitating to cities had begun.

With advent of the Cairnvalley Light Railway building a station in Dunscore, Haining was able to travel to Dumfries to attend the Academy in her teens, a place for the ‘academically gifted’. Just as in her primary school, Haining took to learning with the enthusiasm of a bee to honey.

Her father saw in her the budding dominie and from then on her life was laid out on the path of teaching, the next step some years of study in Glasgow at the Athenaeum Commercial College, and then a diversion, ten years from 1917 until 1927 working in Paisley, first as a clerk, then as secretary for a thread manufacturer.

Jane began work at the Scottish Jewish Mission School in Budapest in 1932, where she was a boarding school matron in charge of around 400 pupils, most of them orphans. Thirty to forty were boarders. Little is known of her time there other than she got on well with the staff and by all accounts the children trusted her and loved her.

A biography of Haining by the international charity worker Mary Miller, is recommended reading. She describes how Haining taught domestic management and lectured on British social life at the Budapest mission. 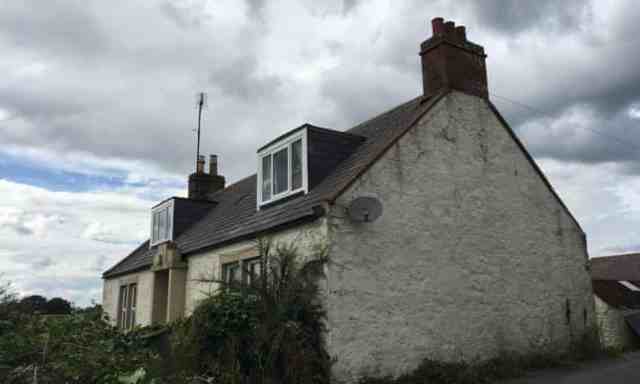 Haining’s cottage where she spent her childhood, ‘Dunscore’, in Dumfries and Galloway

Haining was back in Scotland on holiday when war broke out in 1939, but immediately went back to Hungary to do all she could to protect the children at the school.

She refused to leave in 1940, and again ignored orders to flee the country in March 1944 when Hungary was invaded by the Nazis. When Haining was arrested by the Gestapo she was the only foreigner left working at the mission. She wrote: “If these children need me in days of sunshine, how much more do they need me in days of darkness?”

Nothing is known of what became of the children left in the mission. Soldiers took her to Auschwitz on the understanding she looked after children there who had special needs.

In her biography Miller describes a shy, talented and adventurous young woman, who made the most of the social changes and opportunities for women brought about by the First World War. And in those days, teaching was the stepladder for most women.

While acknowledging Haining’s strong faith and sense of duty, Miller comments upon her sense of fun. “She was always putting on little celebrations and shows for the children. When she was first arrested, she spent a few weeks in the city jail with some other women, and she organised a fashion parade decked out in rags, with a commentary in German that had them in fits of laughter.”

Unwell, Haining was taken from her cell before dawn. “The other women thought that she would be going somewhere easier and better because she was Scottish, but that was not to be.” She was almost certainly gassed along with a group of Jews, gypsies and the mentally ill. They didn’t waste bullets at Auschwitz.

The Gestapo record has the commander claim, “Miss Haining who was arrested on account of justified suspicion of espionage against Germany, died in Auschwitz hospital, July 17th, 1944, of cachexia following intestinal catarrh”.

‘Auschwitz hospital’ is an oxymoron. She was aged 47.

Hockey days – Haining is front row, second from the right

She is not entirely forgotten. In June 2010, the Municipality of Budapest made a decision to name sections of the lower embankment of the Danube river after martyrs and persons who rescued Jews during the second World War. The section of the embankment between the Chain Bridge and Elizabeth Bridge is named after her.

And again, she was honoured in a torchlight parade in 2016, the annual March of the Living, marking Holocaust Memorial Day, dedicated to her memory. Her niece, Deirdre MacDowell, described the honour, saying: “Her name is remembered more and more, and with it that ordinary people can and do make a difference.”

In 2010 Haining was posthumously awarded a ‘Hero of the Holocaust’ medal by the UK government, while two stained glass windows bear tribute to her “service and sacrifice” at her former church in Queen’s Park, Glasgow.

Also, there is a memorial cairn in her home town of Dunscore. Sadly, it errs in two respects. It reads ‘A Heroic Christian Martyr’. It should read, ‘An Heroic Martyr’. You do not have to be a christian to be an humanitarian. You only need a surfeit of love.

Further Reading: Jane Haining: A life of Love and Courage, by Mary Millar