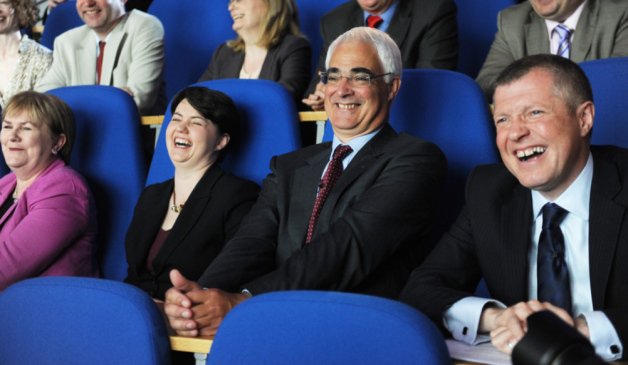 There is a lot of clearing up to be done when a nation throws off its colonial masters, banishing traces of the old order from indigenous institutions, reopening old mysteries, firing the inept. One among many tasks is to organise ways of purging individual and national guilt without jailing thousands of people. The therapeutic benefits are the same as those we are expected to derive now, told Scotland must atone for its past sins exploiting the slave trade.

‘Collaborator’ need not be a dirty word

There are good reasons for mounting truth sessions: they reintroduce betrayers and flaky placemen into society ensuring the worst are neutralised from repeating their behaviour in a liberated Scotland, and it stops the unscrupulous blackmailing them.

Nelson Mandela was not the first to advocate public confessionals as a means of allowing those who had committed atrocities, or lesser crimes such as theft from the public purse, to enunciate their mistakes and become free men and women again. They were called ‘Truth and Reconciliation’ groups. Samora Machel of Mozambique was one of the first African leaders to utilise this system, once he had overthrown his country’s Portuguese invaders, a man greatly admired by Mandela.

Who are to be considered collaborators? –  those who live in Scotland or own property or land in Scotland and did all they could to keep Scotland a colonial territory. I imagine none consider themselves as anything other than loyal British patriots.

The smartest upped and died some time ago, such as the Labour MP George Cunningham – Labour, the party of the people – who turned democracy on its head by introducing his amendment demanding a minimum of 40% of the populace vote for Scottish devolution, a tally that included the dead. For perverting the course of democracy, he remained unrepentant until the moment of his final breath in 2018.

There are those walking among us who are morally obliged to explain why they betrayed the democratic principle. If they wish to take their place in society with dignity, an explanation of their behaviour is the least they owe us.

What do you mean, do you really, really mean?

Before baleful unionists and over-sensitive Scottish Nationalists throw their hands up in horror at what they think I mean, (they will do it no matter what I write) I shall explain exactly what I mean.

I do not mean we revert to the reprisals we saw all over Europe when the Nazis were defeated and collaborators were dragged into the street by ugly mobs, had their hair shorn from their heads, their faces spat upon, their bodies kicked and beaten, their clothes torn off their backs, and men urinate on their naked bodies.

Nor am I talking about the barbarity of tarring and feathering that was the practice in English colonies in early modern times and in America too, including this century.

What I mean is this: I would like to see a humanitarian system put in place where people are asked to step forward and confess what they did was disreputable, repugnant, venal, unlawful – whatever they and we feel to be the case – knowing that it caused people hardship, loss of earnings, livelihoods, loss of civil rights, or even death.

The British state holds not dissimilar confessional sessions but they do not include forgiveness. Individuals are brought before a government committee and interrogated by our elected representatives, a place where bellicose bullies explain their behaviour, a recent example Sir Philip Green, a man accused of looting his own empire.

In the system I propose there is no threat of punishment, other than those named who avoid telling the truth are not excused. I propose a system of forgiveness.

How do we forgive?

Foregiveness; there are two ways to accomplish this task. Both require a degree of voluntary involvement. If that is not forthcoming we can always resort to naming names.

The first way is for the elected administration to call bigwigs to the table to admit their wrong doings, press and television cameras present to record their deliverance. The second is for local councils to do the same for miscreants in their area. Better still, sessions can be held in workplaces, bosses called to account.

If we are genuinely agitating to create a better society, is not weeding out the betrayers and collaborators to give them a chance to right wrongs a good beginning? The people I refer to are Scots plus a few English settlers.

No reprisals, no revenge

Such confessionals should have a time limit on them to avoid running over into reprisal, perhaps one year at the most, to allow those with a conscience not bereft of all integrity, enough time to gather their courage and come clean.

Without realising it, the SNP touched upon the idea when Jim Sillars warned the bullies of big business to stop leaning on their workers, demanding their staff vote against their constitutional rights. (An action illegal is some countries.) He was then deputy leader of the SNP. With days to go before the 2014 vote, voters apparently neck and neck, the unionist press true to form, called Sillars’ statement an “act of revenge”.

What was his crime? Sillars cautioned company CEOs with a “day of reckoning”, a pretty mild reproach considering some company bosses had acted like Armani suited dictators.

Company bosses threatening staff with redundancy unless they did as they were told in the polling booth – blackmail is an unlawful act. They were not condemned by the press. Sillars singled out the CEO of British Petroleum. He felt an independent Scotland might be moved to nationalise BP if the company acted like a state within a state.

Readers who feel we live in a highly civilised society where public confessionals are not necessary are kidding themselves. The United Kingdom is one of the most corrupt nations on the planet. Scotland is infected by association.

Collaborators allow tax evasion as a legal activity; approve shonky companies dumping workers on the dole for boss and investor profit; drawing down of pension funds, signed PPI deals putting Scotland in hock for decades, placing police as moles into protest groups, employing private companies to remove welfare rights from the poor, the sick and the vulnerable, turn a blind eye to religous groups molesting children, allow the purchase of democracy, the poor imprisoned, the rich go free.

What have collaborators to do?

I’d like to see people talk about their past, talk frankly about what they have done, and to give details, details recorded for the history books. If they come clean, they should be accepted back into society as good human beings, nothing more said about past deeds.

I want to see sessions deal with people in a humanitarian way, allowing them to speak openly and honestly, and be pardoned. Those invited to take part who exhibit arrogance or defiance, the facts staring them in the face, should not expect forgiveness.

If they leave having denied culpability, shouted down questioners, those around them can judge the depth of their principles and know what their real standing should be in a new Scotland. Democracy demands liars and cheats are met with relentless questioning.

Who would I like to see clear their conscience? (Sexually and mentally abusive priests and archbishops deserve prison sentences.) Here are a few at national level.

Sir Ian Wood: Multi-millionaire, wealth made from North Sea Oil. What was he hoping to achieve telling the nation our oil reserves were running out when he knew it untrue?

Gavin McCrone: McCrone argues he did nothing to suppress his official Report for thirty years that explained how the oil bonanza would make Scotland a wealthy nation and give a huge boost to the nationalist movement. He avers he ‘only handed it to senior colleagues’. Why did he not alert the electorate?

Murray Foote: As editor of the scumbag Scottish Daily Record he placed the phony ‘Vow’ on the front page and backed it to the hilt. Now a reformed man he still needs to confess why he conspired to defraud a nation of its rights.

JK Rowling: the world renowned children’s author uses her vast wealth and influence to block the civil and constitutional rights of the nation that adopted her.

Sir Nicholas MacPherson: Former permanent secretary to the UK Treasury; he is supposed to remain impartial, but he chose to enter the public fray over independence by publishing his advice to the cabinet stating independence would not be good for ‘the markets’. He also forgot to mention his family’s land investments in Wester Ross.

Brain Souter: His homophobia; selling Dennis when he had no need of greater wealth.

Kate Watson: the Scottish Labour candidate, former Better Together boss, to explain her links to the 77th Brigade, a “military propaganda unit” within the British Army, a branch now operating in Scotland. All political candidates seeking to represent the public should be transparent about their affiliations and commitments.

Gordon Brown: Hard to know where to start: for financing the illegal Iraq war; never visited the Scottish parliament; bag man to crooked banks; continues to lie about Scotland as a super-federal state; the pitiful ‘Vow’, and so on, ad nauseam.

Blair McDougall: for a litany of lies and fabrication sustained even in the face of glaring facts to the contrary, uttered without embarrassment prior to the 2014 Referendum.

Muriel Gray: as chairperson of the Glasgow School of Art board of directors, why did she endorse the whitewash of a Report on the first fire, and take no moral responsibility for the fire as guardian of the institution, nor for the second fire?

Brian Spanner: not his real name, an odious snivelling Internet creep protected by the British press; his associations with the Orange Order, who finances him; why he felt able to be close to JK Rowling.

Jill Stephenson: better known as ‘History Woman’; a neurotic harpy who berates the SNP at every turn with blatant lies and Nazi slurs; called a female SNP MP a ‘slut’, yet continues to describe herself as an academic. She owes Edinburgh University an apology.

Ian Lang: Baron Lang of Monkton; Tory former Secretary of State, for the dog’s breakfast that is GERs, designed to confuse political opponents but specifically, “the SNP” – his words – from knowing the real economy of Scotland.

David Mundell: ‘Fluffy’ Mundell, another secretary of state working on behalf of the British state against Scotland’s interests, for mendacity, blocking Scotland’s progress, doing more turns than a whirling Dervish.

There are lots of others I could add to that list, as readers could too, journalists moonlighting for espionage reasons, ‘patriotic’ civil servants, BBC bosses, but I concede those who feel we live in the best of all possible worlds will think my proposal outrageous. However, the betrayers I draw attention to approved the killing of innocents in Iraq and Afghanistan and Syria, endorsed rendition flights taking suspects to be tortured outside the USA, rubber stamped the sale of weapons to countries they knew would be used to murder civilians, allegedly in our name to ‘protect’ us.

Lest smear mongers get an erection from concocting some lie to make this thesis on imperialism laid bare sound sinister, I repeat the essentials of my case…..

Nobody’s perfect, everybody makes mistakes, but some who hold power and influence make serious errors of judgement to the brutal detriment of others and undermine the common good, errors that have repercussions for years to come.

If we believe we want independence to see the beginning of a better society, among all the other necessities we shall have to attend to, one of the most important is to help cleanse the walking wounded of their gangrene.