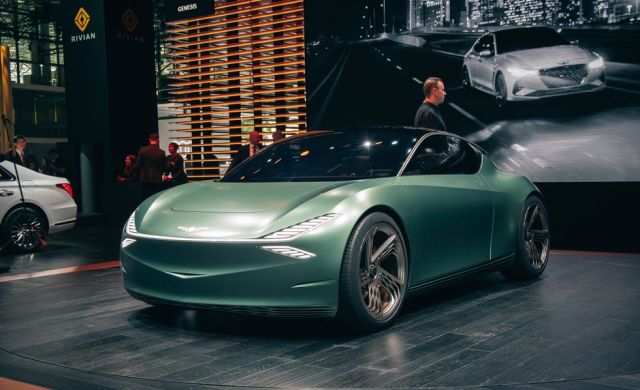 Hyundai’s idea of a luxury city car, the Mint – and it might cost one

Led by Fiat’s wild success with the Fiat 500, the city car that you can upgrade without end, the talk among the major car makers is about the resurgence of small cars. The feeling is, people are finding running costs of large vehicles prohibitive, and if you’re a city dweller a small car is all you need, the cavill being, it should have as much luxury fitments as a large vehicle. So, in answer to reader’s curiousity when I published a photo a few days ago, I’ll try to relate how it fits in with Hyundai’s small car concept, the ‘Mint’.

Genesis’s concept is a two-door electric city car that the brand would like to see enter production in the future. The cargo space is accessed by two reverse-opening scissor doors on the sides of the car. The interior features a bench seat and minimal instrumentation. So far, so good.

The full name of the car is the Genesis Mint, Genesis being the luxury brand of the parent company. Like Toyota who own Lexus and Nissan with Infiniti, Hyundai recognises few will be moved to buy a luxury Hyundai, so they have decided to give the car a separate identity.

‘Mint’ comes not from its intended retail price, but from the concept model’s matte green colour. It’s a two-three-seat, two-door electric city car that’s an interesting experiment in minimalism and quirky excess such as rear gull doors to reach the luggage rack, a space that sits above all the electric gubbings.

Genesis’s executive vice president, Manfred Fitzgerald, and Hyundai’s global head of design, SangYup Lee explained the thinking behind breaking the mold of small cars.  Fitzgerald says that the luxurious city car segment is a vacant lot waiting to be filled. Traditionally luxury in the automotive world has been “size does matter,” but Genesis wants to think differently. “We don’t want ‘Big car is expensive, small car is cheaper.’ We want each car to have its own character,” Lee explains. With the Mint, Genesis is asking, “Can small be luxurious?” and hoping that the public responds with a resounding “Yes.”

Sounds a gamble. We know Brits tried it with Alec Issigonis’s revolutionary Mini Minor that sold in basic form in thousands, racing form in hundreds, and few in luxury kit, such as walnut facia. It took BMW to know how the human mind works when it comes to feathering our nest, and it got it right with it’s bigger version of the Mini.

The Mint a lot of clean cut German design in it. It is a collaboration between Genesis’s German and Korean design studios with an eye on the North American market. Lee says even though it has a wide, sporty stance and a coupe like body, it wasn’t created to be a performance car, but more of a design statement like the original Audi TT.

In place of the Genesis crest grille is a tiny V-shaped opening at the base of a bigger crease that echoes the grille’s shape. Headlights are a novel design, the roofline radical, with a kicked-up C-pillar, an upright rear window, and a trunklike deck reminiscent of the 2002 Renault Mégane.

Not wild about the burnished cream interior, bit seventries, but there will be other choices

Up close, the Mint looks a lot bigger than it actually is. It’s described as an A-segment car in the vein of the Fiat 500 and Mini Cooper. No official dimensions are available.

The wheels are huge and pushed out to the corners, and the overhangs are extremely short. The Mint’s battery pack is located under the floor, and the company says the car has a range of about 200 miles and 350-kW fast-charging capability.

The interior is covered in Cognac leather (hic!) and is even more forward-thinking in design than the exterior, designed like a space-constrained luxury hotel room.

It has a two-across bench seat (that can sit three), and both the bench and the entirety of the instrument panel are powered, angling towards the driver’s door when it opens for easier ingress and egress.

Instrumentation is kept to a minimum, with a small screen mounted in the center of the steering wheel and three round touchscreen buttons on each side of the wheel, which Lee says were designed to be at a fingertip’s reach.

One feature that will make its way to future Genesis products is the spherical control located in the center armrest. When the car is turned on, the sphere rotates around to become the control for the driving modes; Lee says this is so you always know when an electric car is on, something that isn’t always apparent.

The sphere shape is echoed on the interior door handles, the rings around which control the windows. Another key design element for the Genesis brand is the diamond-shaped pattern called G-Matrix; it is found on the wheels, the lower body, the interior floor, the pedals, and many of the interior’s structural components. 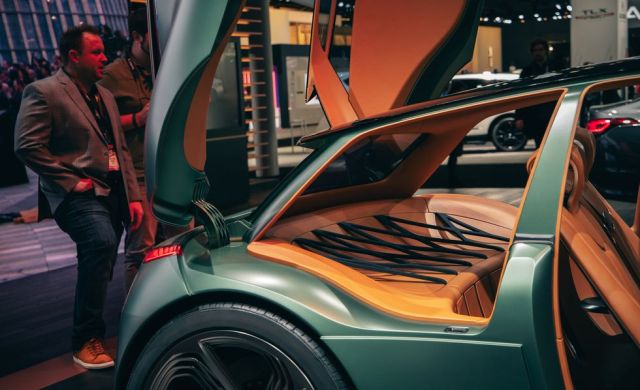 Sangyup Lee is adamant that the car is production ready. Will the Mint be a pioneering design or a quirky buy for eccentric drivers looking to be different? Genesis thinks there is a market.

As far as I can tell, no other luxury brand is thinking of moving into the city car area, but there has to be buyers for a second car for short journeys, just as I use my Smart car to beetle around the capital and my old Toyota RAV4 for long distance hauls replete with heavy luggage. Maybe the Korean company is onto something.

Writing as somebody who has only ever bought cheap second-hand cars, and fixed them, (I bought new only once and regretted it immediately), and seeing rural bus services cut because local authorities can’t afford to subsidise them, I’m looking at a future where small cars are as expensive to own as large, and perhaps the masses are being forced to curtail their travel and lose a great degree of physical liberty.

Surely the answer to making our cities a pleasant place to live again, is not luxury cars of all sizes, unaffordable by the masses, but small, cheap, electric runabouts for those who are unable to cycle, or for whom a bus service is not convenient?

Ian Callum, the Glasgow School of Art trained Scot, Jaguar’s head of design, progenator of the likes of the Ford RS200, Aston Martin DB7, and Aston Martin Vanquish earlier in his career, has said that we won’t be seeing any giant Tesla-esque touch screens in any of his cars despite increasing industry trends. “If you’re driving 80-90 miles an hour – and you can in some countries, legally – you don’t want to be flipping around an iPad looking to move your door mirrors or your seat controls.” I must agree with him. There’s nothing tactile about a computer screen, and it gets covered in greasy fingerprints. For a car to be a thrill to drive it has to boost all the senses, sight, sound, touch, and smell.

The annual pump rip-off headlines are appearing again. Fuel retailers have raked in £5 million in excess profits from motorists every day by failing to pass on falls in their wholesale costs, according toa report compiled by campaign group FairFuelUK. And we all say as one, what a surprise. An audit which has tracked fuel prices for more than four years estimated that this tactic has generated almost £8 billion extra for firms since January 2015. It calculates over this period drivers have paid an average of 4p a litre – or £2.20 a tank – more than they should have, given the variable price of crude oil.

And while I’m on the subject of paying an arm and a leg for a litre of petrol, it will come as no surprise petrol theft is on the rise. Any number of ‘forgetful’ folk are driving off without paying for their tank of petrol, Ploughman’s sandwich, Bounty Bar, latte, and Lottery ticket. Figures from the British Oil Security Syndicate (BOSS) reveal the average amount lost by garages stood at £346 in the second quarter of 2018, but rose by 21.4 per cent to £420 per site in the third quarter of the year. BOSS says petrol thefts – or ‘drive-offs’ – are responsible for two-thirds of all forecourt crime, with the remainder coming from incidents where motorists don’t have the means to pay for fuel after filling up, and do not return to make good on their debt. I have the answer to this rise in gas crime – you pay at the pump prior to filling up. Mark my words, it will happen exactly as I say it will.