Mary Queen of Scots – a review 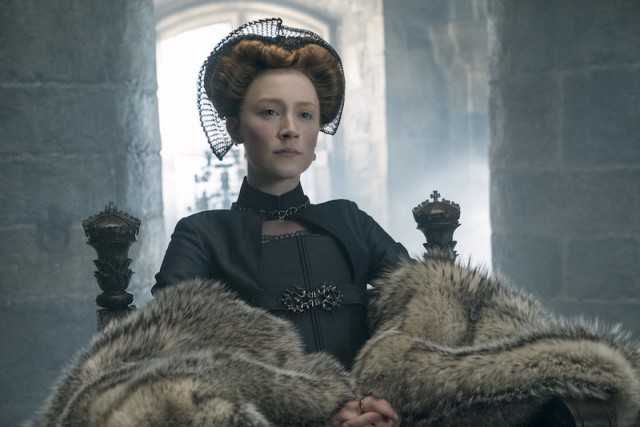 A little too Empress of Russia, a little too portrait by Cecil Beaton

This must be the first Scots historical drama in living memory in which big, bad bearded James Cosmo does not appear. There are lots of fresh Scot’s faces mostly with beards.

Let me put aside for the moment the obvious core of the film’s strength – you can tell what that is from the film’s promotion – this film belongs to Saoirse Ronan. No one else gets close. Let me go instead to what almost wipes out all that has gone before, the historically illiterate scene where Mary meets Elizabeth.

Neither character met in real life. The film’s contrivance grounds the drama with a thud. The face-off is a Hollywood convention that backfires when counter to character development and geographical location. I call it the ‘Heat’ moment. Studio bosses demanded De Niro meet Pacino in a scene although the characters they played wouldn’t in reality. The studio is patronising us – “Give ’em what they want!”

Ironically, Rourke has given in to male dominance on a project she planned to be a paean to the female spirit. I’ll explain that in detail as the review progresses.

The face-off arrives near the end, the penultimate scene. It adds nothing to the drama. Rourke switches visual styles and setting from 16th century Scotland to Japanese Edo period. The dialogue between the pair repeats in staccato sentences what has been said before, it is ponderous, portentous and stilted, a huge anti-climax.

There are documents exiting showing that a meeting was suggested but never took place. Rourke avers the meeting of the two Queens was inspired by the 19th-century Friedrich Schiller play ‘‘Maria Stuart”, in which Mary and Elizabeth talk and argue face-to-face. To state the obvious yet again, that’s a play for the stage. Rourke is directing a film.

Rourke adds, “The whole conception of the film for me was around that meeting. We wanted to have our version of that famous scene, with these two women looking at each other and being confronted with their choices – their personal choices, their political choices. It’s a moment that’s deeply personal.” Aye, right, steal someone else’s idea and lift it out of its context.

Try and imagine Picasso deciding that his Guernica masterpiece is not enough, he needs to create a small painting next to it to explain to the art world what Guernica is about, for the hard of understanding. This direct confrontation in Mary is a dreadful misstep. 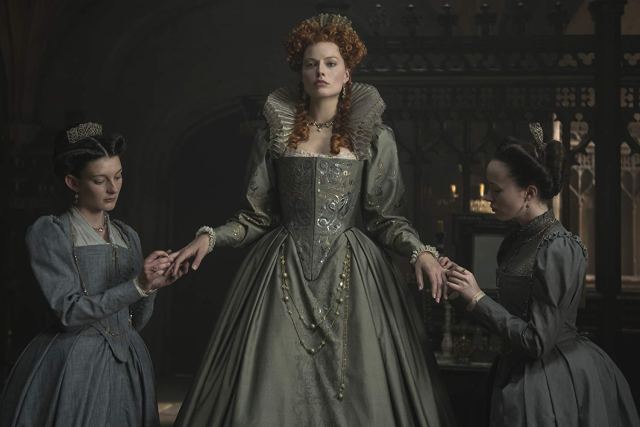 The determination to shift the symbolism from 16th century Scotland and make it sharply contemporary in its sexual politics fails. It relies on shallowness, a love story, or put another way, who will be first to lay Mary? This is a film about powerful women, directed by a woman, all about male fantasies.

Being of a modern bent, there is complex sex everywhere: bi-sexuality, homosexuality, lesbianism, barren sex, repressed sex, religious sex, misogyny and power driven sex. With all that bonking going on a wonder anybody has any energy left to do normal things, like eat and wash. The screenplay shows us two strong female monarchs both vulnerable to their sexual desires. I half-expected Mary or Elizabeth to turn to a coy male courtier who has spurned them to say, “Hey, a woman has needs too, big boy!”

The fault, and it’s a whopper, lies with scriptwriter Beau Willimon. His script is based on John Guy’s book Queen of Scots: The True Life of Mary Stuart. Willimon proves he understands today’s amoral political dynamics with The Ides of March, and his Netflix’s House of Cards, but he understands damn all about the political and cultural relationship of Scotland with England.

Blame also lies with the director. Rourke is obsessed with pageantry, sniffy looks, being the first on film to show a woman has periods, and a lot of empty symbolism. Some of her surprise moments I can see working well on stage, but on screen are heavy-handed.

In that respect Rourke is rescued by her technical creatives, cinematographer John Mathieson, art director Sophie Bridgeman, her lighting designer George Tarbuck, and the set designer James Merifield, all of whom make us feel we really are in Mary’s Holyrood Palace lit by a thousand candles.

Those aspects are worth the price of the ticket, just. One oddity, Mary was loved by the commoners and mixed with them yet except for a moment at the start, when a child follows her entourage, we see none, but we do see one Gaelic soldier swear adoration. 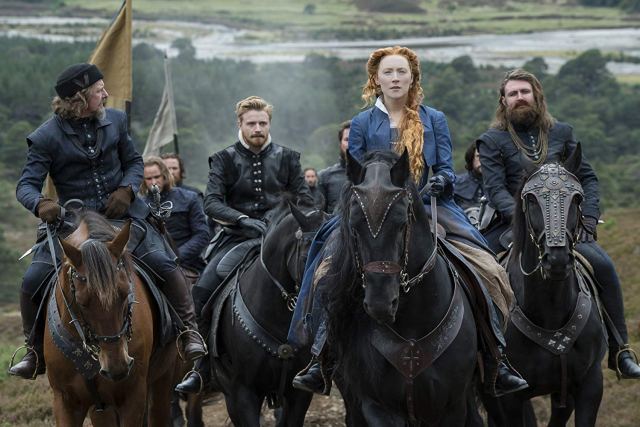 There is nothing of Mary giving birth to stillborn twins when captive in Leven Castle, (probably Lord Bothwell’s issue) nor her escape in 1568 to gather a small army defeated at Langside by a Protestant faction.

We do not see Mary flee to England, nor anything of her incarceration for 19 years – yes almost half her life – in various English prisons. That length of imprisonment makes mockery of Elizabeth’s anguish seen in the film, on the day of Mary’s execution. Incidentally, nothing I’ve ever read of Elizabeth written by historians, nor enunciated by her in signed documents, exhibits the slightest affection for Mary. The clash between them was a clash of Crowns.

The latter part of Mary’s life is restricted to a scene sitting locked in a cell and then walking to her execution, mention of her pet dog hiding under her dress lost in translation.

There is a howler worth mentioning. When Mary goes for a romantic stroll with Lord Darnley, from Holyrood Palace to Palace backyard, so to speak, we see no cattle grazing in fields under the shadow of Edinburgh’s volcanic Crags. They step from back door to the Highlands – gnarled pines, peat bogs, and picturesque mountains.

What you see is what you get, romance, rejection, flirting, more romance, a marriage ceremony, bad sex, married men put in their place, ladies in waiting undoing Mary’s intricate gowns and lacing them up again, men ripping them off, and a modest ambush by a wee stone bridge blocked by a herd of very clean Highland cattle.

To the film’s credit, the death of Rizzio is pretty well accurately staged in front of a pregnant Mary, and so too the murder of Darnley by gunpowder plot and strangulation. 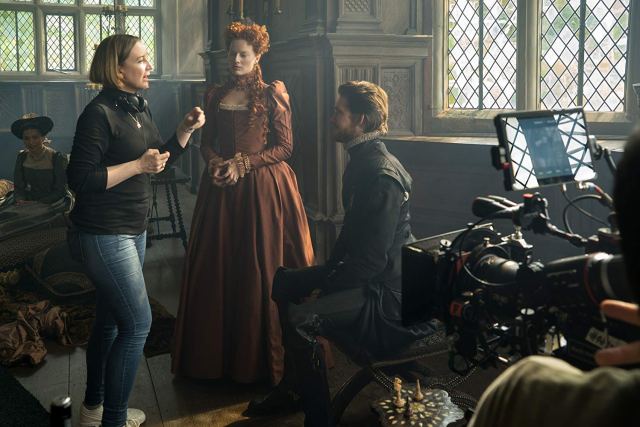 Josie Rourke in discussion with Margot Robbie and Jack Lowden

Mary is given lines way beyond her years, never a falter in riposte fired back at insolent nobles, never an uncertainty in command. It is true she was very bright, well educated, multi-lingual, keen to be wise and fair, but no Machiavellian operator. The script does show that she forgave the worst of men too often, but that’s as far as it goes. There’s repeated arguments about Catholic Scotland at odds with Presbyterian Scotland and England, little on why post-Reformation England dared not risk a Catholic monarch.

Willimon has no understanding of the times. This is amply demonstrated by Guy Pearce playing 1st Baron Burghley William Cecil very, very badly. Cecil was Elizabeth’s chief adviser throughout most of her reign. Here he never gives justification as to why he wants to incite civil war in Scotland – the kind of internecine battles that keep Scots from their independence – other than he doesn’t want a Catholic on the throne.

John Knox is all fiery condemnation, his congregation ready to accept his every word. Mary is a harlot, a whore, a ‘wee lassie’, a worshipper of the Pope, not fit to be a scullery maid. In the role David Tennant is wild eyed, lost behind Rasputin’s beard, miscast, an actor without any gravitas for the role. The founder of the Presbyterian Church of Scotland shows not a sign of a Scot on the make, protecting his interests. Tennant gives us the Reverend Ian Paisley in Scots dialect.

Elizabeth is straight out of Eastenders casting, intolerant, vain, a bully rather than a hardened monarch fearful of foreign invasion. Her day is all office politics. As Elizabeth, Margot Robbie does a lot of staring at her fading looks, agreeing or disagreeing with her chief adviser, anguishing about her image, fretting that she cannot have children, painting her face to hide her pockmarked cheeks and chin, and stomping around in a temper. Early in the film Elizabeth declares herself a man. What does she mean by that? A female in a straight jacket, or gay?

The screenplay reduces the two monarchs enmity to who has the best looks, rather than who is most equipped to rule. Mirror, mirror on the wall…..

Rourke is more comfortable attending to the character of Mary. For that she has the  acting prowess of one of the most talented actresses on her way to the top. Ronan  captures expertly the vulnerability of Mary, the ingenue, the capricious young queen, her impetuosity, her dignity, her intelligence, and the monarch unable to keep her male dominated court in order. Her portrayal is both poignant and nuanced, shrewd and calculating when she must be, and highly emotive and empathetic at other times. Mary exemplifies Scotland’s centuries old struggle to live peaceably with a warring neighbour.

The role of Mary is an all-time career creating opportunity and Ronan grabs it with her entire being. Her performance is captivating. She’s the centre of the narrative, the reason to see the film. Scarlett Johansson dropping out of casting for Mary was a good thing. 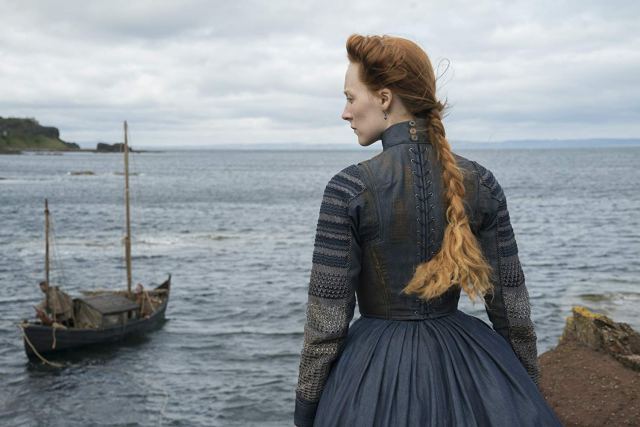 There’s never a sunny day in this Mary’s Scotland

Well, I came to the film full of foreboding and prejudices, this version of Mary’s life written by an Australian, produced by an English production company, with a screenplay by a writer of contemporary television drama series.

It fails to convince because it falls back on movie cliches about competitive males. Willimon’s script takes one of Scotland’s most fascinating political characters, a woman who knew her destiny almost from the moment she was born, ambitious and absolutist, and makes her a plaything for the ambitions of deceitful men – a #MeToo agenda.

I have read Lady Antonia Fraser’s biography, I have seen a televised transmission of the film starring Vanessa Redgrave and Glenda Jackson, (the two meet in that version too) and my tall, beautiful actress-director, daughter Nora, played Mary on the London stage in Liz Lochhead Mary Queen of Scots Got Her Head Chopped Off. I enjoyed all three versions for the truth that lay in each of them. This version left me unsettled.

It matters little that after Elizabeth’s triumph we see Mary’s son take over the Crown of both England and Scotland, James VI & I – the narrative is one-dimensional.

Near the conclusion Mary looks over the water at a distant shore and says, “England looks just like Scotland”, and I thought, you have to be bloody kidding.

21 Responses to Mary Queen of Scots – a review