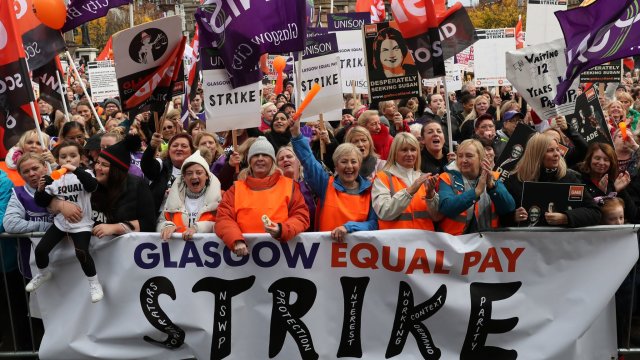 The GMB union held a two day strike in Glasgow on behalf of equal pay for women. It is valuable to look at its motivation and what it achieved. They were paid up to £3 an hour less than council staff in male-dominated but broadly equivalent roles such as bin collecting and street sweeping. Some estimate they’re owed hundreds of millions of pounds in back pay.

There is nothing as bewildering than a union that holds to a tenuous belief in anarcho-syndicalism and yet regularly settles for a great deal less faced with employers it is affiliated to, such as the British Labour Party, the party that governed Glasgow for over twenty years.

You don’t demonstrate greater theatrical grandstanding than continuing to shout for equal pay long after it’s promised, scheduled for implementation. That’s essentially the cockamamie position of the anti-Scottish GMB, the General Municipal Boilermakers, whose officials command vast salaries and expenses while advocating equal pay for all.

What is the GMB?

It comes as no surprise to learn the GMB was born in East London late in the nineteenth century, an offshoot of the early Socialist Party. It has no historical association with Scotland, no record of intervention in any of Scotland’s great social-political upheavals or events, from the Clearances to Glasgow’s slum tenements.

The GMB is a Cockney clique that thinks Scotland should be North England in every respect, from its education system to the NHS and on to government. In that, the GMB is antagonistic to Scotland’s democratic ambitions. Readers will remember the GMB is often aided by UNISON. Both unions canvassed ruthlessly against Scottish independence in the 2014 referendum. Neither is a friend to Scotland’s constitutional or civil rights.

You cannot be a worker’s union and simultaneously campaign against full democratic rights. Both are cornerstones of democracy.  Simply put, the GMB works as if a wing of the campaign to Bring Back the Great British Empire.

The Glasgow women’s two-day strike was, in most part, organised by the GMB’s Scottish organiser Rhea Wolfson. The hallmarks are classic, first cast yourself as the victim of political abuse, garner press attention for yourself; assume a messianic resolve to triumph, and portray yourself as a latter-day Joan of Arc.

Wolfson is no stranger to political controversy. In 2016, she replaced Ken Livingstone on the Momentum slate for the NEC after he was suspended from the party. However, she experienced difficulties after failing to secure the nomination of her home CLP, as required by the rule book. Wolfson blamed her former Scottish Labour leader Jim Murphy for orchestrating her defeat. Ultimately, as reported by Labour List at the time, she changed her party membership from Eastwood to Almond Valley CLP (Livingston) and got onto the ballot paper.

The GMB shifts the blame

In all her ranting and raving about equal pay in Glasgow not once did Wolfson remind the women losing two days wages that the GMB had sold them down the river on that very goal. Whenever equal pay is raised the GMB gets it wrong. The union is suing its former lawyers, Digby Brown, over the firm’s advice in North Lanarkshire’s equal pay dispute. That claim will drag on for many months placing claimants at a disadvantage.

The GMB did its best to give the impression that Glasgow’s SNP run-council is obstructing a manifesto promise to settle 12,000 outstanding pay claims. “There had been 21 meetings this year but no meaningful progress”. Meaningful is Wolfson’s personal opinion, an odd one set against a guaranteed resolution by the end of 2018. You wonder how easy the GMB made agreement of complicated detail reassessing grades.

Wolfson and the GMB failed to make clear to the public that the previous Labour administration in Glasgow had spent an estimated £2,5 million of taxpayer money in legal fees fighting against the implementation of equal rights for its council works. That in turn, burdened the incoming administration with huge debts. The GMB tries to embarrass the new SNP administration, as if it was the SNP who caused the strike.

Raiding parties to the rescue

There is a strong rumour her GMB male colleagues advised against striking. It rings true. They almost certainly foresaw how it would backfire on the union because the public are so much better informed of the rights and wrongs of the dispute than before.

Wolfson threw caution to the wind. She announced the strike in the following terms on the GMB website, and in so doing showed how little she cared about the school children and vulnerable adults affected:

“The strike will involve more than 2,000 GMB members who provide round the clock home care for 87,000 service users, as well as cleaning and catering services for schools and amenities across the city.”

In the event, an estimated 8,000 thousand people attended the rally, mostly woman, which sounds a success until the public learned a large number were sent from England.

Groups from ‘darn sarf’ were paid to attend with expenses paid. Expensive placards were handed out to all  who attended, money that could have helped subsidise some of the women struggling to make ends meet. How many of the indigenous women were single mothers, and how many were married with working husbands is not known.

A labour union is the chief mechanism by which a democracy guides the distribution of wealth at a local level. Its function is to organise collective bargaining. Elected governments are meant to do the same job at a national level, but for wider social benefits such as sustaining infrastructure and institutions.

Trade unions are a source of cooperation and community. They exist to achieve wage equality. Their function is to protect workers against economic vicissitude. According to fascist policy – which we see arising everywhere in the UK and abroad – unions must be smashed to render workers isolated, prepared to accept whatever is offered.

In Part One of Mein Kampf Hitler attacks unions over an over again. Hitler wanted a blindly obedient fighting force loyal only to the national leader of government.

Whether or not Wolfson is intellectually aware of Hitler’s outlook is unknown but she is able to discern fascist language to a degree, commendably assiduous in condemning anti-Semitism in the Labour Party, a fighter of sorts. However, Labour’s travails are not for this essay.

The current attack on unions

In western society we see very successful attacks on unions by the power elite. We saw it in the Hollywood movie On the Waterfront, the loner beating the crooked union.

In the UK Thatcher squandered thousands of millions of pounds of Scotland’s North Sea oil on eradicating union influence, vastly reduced the scale of union activity, (aided by the right-wing British press) destroying worker’s livelihoods, breaking up families and communities, paying those made unemployed social security and unemployment benefits for the rest of their days … until now, that is. The Labour Party has no plans to roll back draconian union law.

We do not ostracise unions in Scotland, we encourage their participation, but note I am talking about indigenous unions not England-orientated unions carrying the flag of  British nationalism and its agenda.

In Scotland, the SNP government, and the SNP council in Glasgow did not attack the GMB once. Indeed, they supported the women to the hilt rendering a strike unnecessary.

As the leader of the council said, “The women won their case the minute the SNP were elected.” Susan Aitken, the patient SNP leader of Glasgow city council, said her administration “remained committed to agreeing a settlement with staff by the end of the year … and not any sort of low-ball offer.”

You cannot get more committed to a cause or precise than that, and that is in the face of many millions of pounds – some say a billion, needed to finance equal pay.

The GMB didn’t want SNP support. “Glasgow council has no money, therefore the Scottish Government will have to pay up”, said one callous official.

This is the British nationalist way of thinking. Impose Tory economic policies on Scotland with the full support of the Labour Party, reduce Scotland’s annual grant to squeeze the SNP’s choice of how to spend it, and then demand the SNP government supply the difference from thin air. It is no better than the Mafia demanding money with menaces.

In her oration to the women’s rally Wolfson did not rail against the British state that undermines Scotland’s sovereignty, nor demand Scotland be allowed to keep what it earns to spend as it sees fit, in particular, have enough to implement equal pay. She made no mention that Richard Leonard Labour’s branch manager was a GMB official when the women were denied equal pay. She is part of a Labour Party that deleted Clause 4 in its Manifesto and in one fell swoop practically outlawed unions.

Equality of wages was already agreed. the GMB created division when they should have created cohesion and a collaborative partnership. The women need better leadership. The GMB turned an honourable goal into a giant hen party.

Without a conscience, she left many young and old vulnerable for the length of the strike. When I think of the GMB, I think of fascist demagoguery.

Betraying the people of Glasgow

The people of Glasgow voted for independence without caveat. They did not invite fifth column English unionists to come to their city to divert that just ambition. The GMB betrays that clarion call with every utterance they make. The Labour Party and their affiliated unions show they a force against social progress.

In essence we’re dealing with a union that correctly demands equality of pay but not equality of civil rights in a sovereign nation. That is a preposterous stance to take.

What we saw in George Square, Glasgow, was Tammany Hall politics of Labour graft and union corruption, the legacy of a Labour administration.

NOTE 1: The essay was attacked by GMB’s boss, Tim Roache. He admitted he had not read it, nevertheless he judged it ‘shit’. In 2020 he left the job abruptly, under a cloud of accusation. In his ignorant condemnation of my critique of the GMB, he was joined by his malicious sidekick, Gary Smith, the antithesis of a union official.

80 Responses to GMB – a Cockney Clique