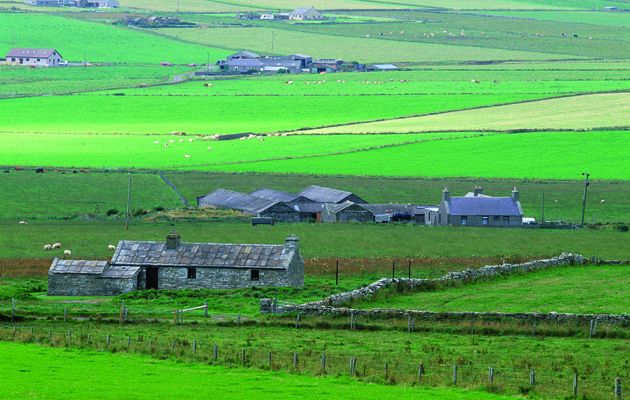 The visit was limited to the Orkney mainland, only a few days and over twenty-five years since my last, back then shimmering in sultry heat to film a documentary about the  Italian prisoners of war and their unshakeable links with the U-Boat barriers they built in all weathers at Churchill’s instruction.

In the few days I was there this time I dodged sudden pelting rain, blustery winds, and marvelled at the rich fertile earth and uniformly green grasses that sustain the people and cattle and sheep. I learned things about Orcadian history, their political attitudes too, and had my prejudices confirmed.

My stay was in a wee terraced house accessed down a slippery stone paved ‘close’ in Stromness, the sound of a fast running stream between it and the adjoining property. Stromness is a humble ‘second city’ of no pretentiousness I could discern, but a drab one if only the people would take to painting the pebble dash exterior of their houses bright colours and dump the Presbyterian lacklustre looks.

Stromness Harbour, the black building to the right, the award winning Pier Art Centre. The two houses in the middle appear to have smiley faces!

Shopkeepers welcome you in with a smile and then spend a lot of time gossiping with customers, there for that hour’s single purpose, leaving you alone to rummage for a fisherman’s hat to defy the rain. Listening to them reminds you the unhurried cadence of the Orkney dialect has to be judged the most beautiful Scots-English to enjoy alongside that of folk in the western Highlands.

You can understand why Orkney nurtures short-sentence novelist’s addicted to austere prose, a stout pair of boots, and a plain meal and pint in the local under-decorated bar. Everything is paired to the bone. There are so few people, just over 20,000, many a character easy to remember and easier to pigeon hole, a generation you can see each day adding the years.

It’s hard not to meet them shopping in the narrow streets cobbled down the middle to take work horse hooves, or overtaking your car too fast on long stretches of road. I almost wrote ‘country road’ but every road is really a rural road.

As well as the need for tractors, there are a few car dealerships making a decent living by charging higher than mainland prices from the folk of this sparsely populated place. The Ford showroom was once a bicycle store established about the same time as Ford invented Ford cars and the conveyor belt.

Serious crime is not as central Scotland knows it. Misdemeanours are restricted to drunkenness and minor car accidents, although the large influx of English tourists and settlers has caused people to lock their doors where once trust was next to godliness.

I can’t think where a murderer could hide for any length of time without starving, spotted foraging for food. Orkney ‘crimes’ are restricted to character flaws, the stuff of human nature and Chinese whispers, looks and nods, such as adultery and a sallow skinned generation tight lipped about their Italian parentage. 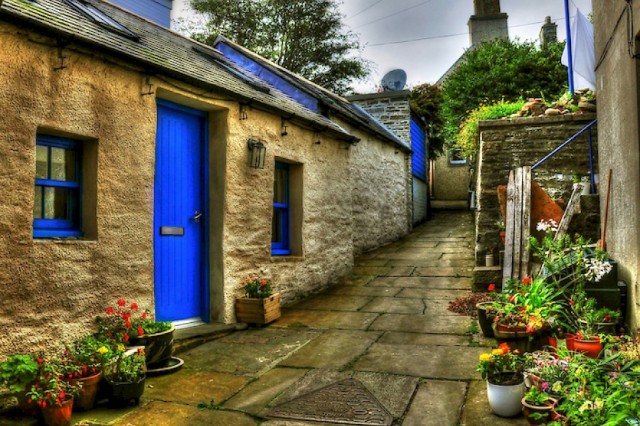 The wee hoose in the ‘close’ where I stayed in Stromness, typical of its kind

My time was spent in the company of a new friend whose bonhomie and wry sense of humour makes me feel I’ve known him all my life, the historian, story teller, Tom Muir. (A link to his Orkney guide site is below.) There isn’t much Tom doesn’t know about the history of the mainland and its islands, its stories, magic and myths.

Tom lives in a book-lined bijou three-storey terraced house, books the best insulation for cold winters; well, no one reads foam insulation. His is a ‘C’ Listed property which he says makes him a proud owner. Rhonda his university educated wife is from New York State, eager to make Orkney her home. They welcomed me to a hearty meal of locally caught seafood, followed by the biggest homemade trifle I’ve ever seen, so big I had to take a doggy bag’s worth back to my cottage for breakfast next morning.

Tom and Rhonda introduced me to Bryce Wilson, an historian and artist of an older generation, his encyclopaedic knowledge of Orkney achievers second to none, soon to be  listed in his published book. “It’ll hae a hard cover, like a real book, mind.” Bryce and I appear to be brothers in the independence cause. He kept his powder dry, for in our conversations he never contradicted me, but never praised my politics either.

Tom Muir is a man you warm to immediately. You know he avoids glib judgements. His good nature is as ample as his girth, the best kind of man to ask about Orkney’s politics.

I am well aware pop-eyed Unionists, egged on by Lib-Dem’s MSP cheerleader without portfolio or pom-pom feathers, Tavish Scott (Shetland Islands) thinks Orkney and Shetland will demand independence the minute Scotland regains its self-governance. There is no evidence of that happening and no one can tell me why if it did it would be a threat to Scotland’s hegemony. If Scotland ever got shirty about Orkney independence we can always send a gunboat to subdue the locals. (Orkney folk reading this know I’m only joking – it will be a very small gun boat.)

In short time all Secretaries of State for Scotland (for is a misnomer, they’re all against Scotland’s good health) cause themselves to be dismissed as lackeys and discredited. Local MP Alistair Carmichael is one who went out of his way to demonstrate to Scots and a court judge that he’s in the same tradition, a total scumbag not shy of smearing an elected first minister with lies and then denying his guilt.

He’s a man who thought a good joke was to tease me erroneously that a predecessor of his, local MP Jo Grimond, spelled his surname with two m’s, (he didn’t) and I replied did he Carmichael spell his with two – Carmmichael? 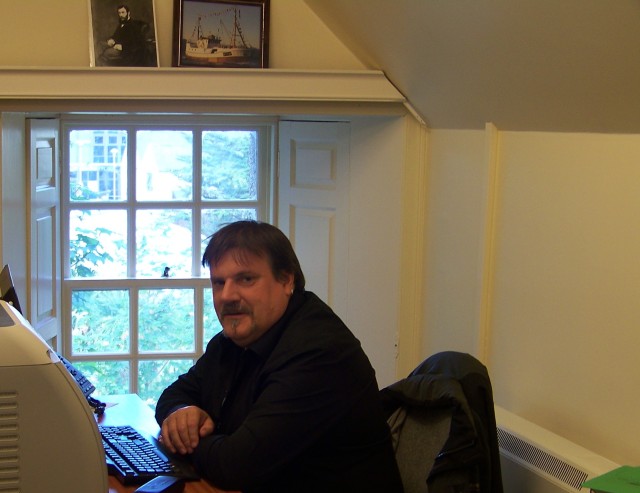 Tom Muir, an ‘A’ Listed man living in a ‘C’ Listed house

To sterner stuff: I wanted to know why Orkney folk felt disconnected from the mainland. Speaking in a personal capacity, Tom explained why he thought 70% of Orkney voters  voted against independence, embarrassingly the highest figure anywhere in Scotland.

“In the cold light of day you can see why. A feeling that the SNP have no time for the Northern Isles – we still return a LibDem MP and MSP. A resentment that the SNP supporting Western Isles seems to get a lot more perks than us, like RET on ferry fares. But what drove the high number of votes against independence were three things:

1. The dog-like devotion to the LibDems (out of force of habit), who preached against independence as an evil thing.

2. The farming community’s fear of Scotland being outside the EU and the loss of subsidies that that would lead to.

3. A high number of English people in our population who didn’t want the union to break up. “I don’t want my family to live in another country”.

On saying that, I know a lot of English people pro-independence and still are. I suspect an awful lot were not.”

Tom  shares my distaste for the BNP and its offshoot UKip, votes cast in Orkney of all places until you discover so many there are English incomers, a sure sign the colonial is no respecter of another land’s values.

Maybe the fact that English colonials are about to drag Scotland out of the EU and its generous grants will alter the mind-set of Orkney farmers, but they’ll have to endure the interference of English neo-fascists attracted there by free education, free prescriptions, and low cost of living. The same Jack the Lads will have to put up with derision from indigenous nationalists over being so easily hoodwinked by a lie on the side of a red bus, and a slack mouth bigot who enjoys warm pints of beer.

Orkney and Shetland have a troubled relationship with Scotland. Both got pawned in lieu of payment of the dowry of Princess Margaret of Denmark to King James III of Scotland. Her father, King Christian of Denmark, didn’t have the cash, so pawned first Orkney and then Shetland. He ruled Norway at that time, but was not allowed to give away any Norwegian territory, which is what he effectively did, as he never paid the money back. Scotland annexed the islands in 1471.

From this I surmise in some ways Orkney feels it has the same uncomfortable history with Scotland as Scotland has with England. Tom adds:

“Our laws, language and customs were suppressed by church and crown and Scottish lairds were introduced to lord it over the ‘peasants’. There has always been a romantic hankering back to a Viking ‘golden age’, seen in Up Helly Aa in Shetland and by writers like J. Storer Clouston in his 1932 ‘History of Orkney’.”

I asked Tom about his own allegiances and he surprised me by saying he too feels more Scandinavian than Scots. He shares words, folk tales and customs with Scandinavians. He feels at home in Norway, less so among Gaelic speaking communities in Sutherland, just across the water.

I bear him no ill will, he’s just different, that’s all, but his sense of place gave me the clue as to why untrustworthy Liberal-Democrat Alistair Carmichael felt it safe to smear Nicola Sturgeon and then deny he had done it. 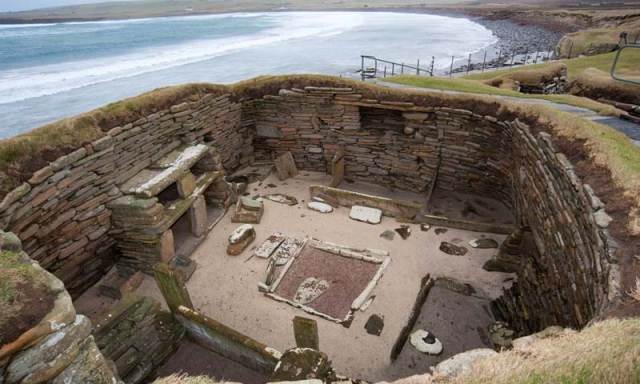 Despite large areas of flat farmland the Orkney Islands is an archipelago. Hoy is the second largest of Isles and Ward Hill at its northern end is the highest in elevation. Within the time allotted I managed only a few visits to ancient monuments, one the sprawling, genteel decaying home of Major Malcolm Macrae, 12th Laird of Breckness, one of Orkney’s biggest landowners outside the Royal Society for the Protection of Birds (RSPB). His Skaill House estate encompasses the area known as Scara Brae.

Prehistoric Scara Brae is over 5,000 years old making Stonehenge a boy upstart in comparison. From the amount of promotion and television documentaries broadcast about Stonehenge and its mysterious builders you’d never know Scara Brae, and many of the other Orkney settlements, are eons older and to my mind, far more fascinating. Is that fixed-in-stone history another reason for inhabitants to see themselves as different?

I left Orkney impressed by an number of things, but a little subdued that so many of its inhabitants will vote against Scotland’s freedoms – and therefore their own – next time around for no particular reason than they can do it. No wonder Alistair Carmichael carries the swagger of a condemned man who knows he’ll never see the gallows.

This site is essentially Rhonda’s creation, a good place for information: https://www.orkneyology.com/peedie-adventures.html

6 Responses to An Orkney Visit