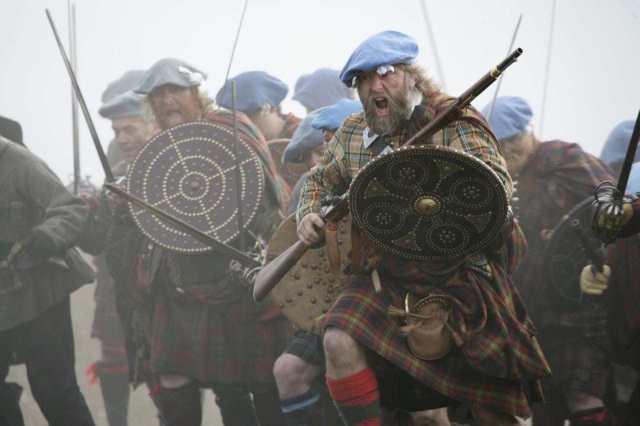 To the perceptive the briefest study of Scotland’s history will throw up remarkable similarities to our current predicament, the same abuse hurled by colonial Brits, the same threats from Westminster if Scotland goes its own way, the same divisions among inhabitants over which is worse, independence or subjected to English imperialism?

When Unionist pundits mention the Act of Union they generally do so with the minimum of detail. “It was voluntary” they say, as if as natural as drinking water. And that’s about the extent of their knowledge. They forget or do not know the Scottish populace had no vote, and in fact some members of the Scottish Parliament were entirely against it.

The Act of Union was agreed by a tiny patrician elite against some angry internal opposition, and pretty well everybody else in Scotland hostile as hell. We are bedevilled by a similar elite today, this time aided and abetted by incomers dragging a colonial mentality with them and sad Anglophiles ashamed of their Scottishness.

The salesmen of Scotland’s soul encountered an unexpected barrier – the concept of the Crown-in-Parliament. That idea was anathema to Scottish constitutional politics. After argy-bargy over exactly what had been signed, English parliamentarians agreed the Treaty of Union was not an inviolable law, but a pact that could be amended, altered or annulled if that was the will of the people. This significant concession to constitutional legality is buried under the floorboards of Westminster by Scotland’s opponents.

Many English MPs were happy to acknowledge it was not an indefinite relationship. Some hoped to get rid of Scotland at the earliest  convenience once the hostilities England with France were laid to rest. Acceptance of the Act as a temporary affair assuaged the conscience of the Scottish elite fearful of getting tarred traitors for eternity. They could tell the good folks back home the Act wasn’t a for-ever marriage.

Reading parliamentary comments and  pamphleteers of the time confirm it was by no means certain the Union would last more than … how can I put it … a generation, that is, a decade. Looking around they saw other unions fail, hailed a triumph of universality one day, split asunder as unworkable the next. Spain and Portugal was one such union, Norway and Sweden another. Examples of tried by failed were there for Scots to see.

The Union had one terrible side-effect. The seeds of Protestant and Catholic animosity hitherto dormant sprouted roots and grew. The negative aspects of 1707 soon helped swell the ranks of Jacobite sympathisers.

For the uninitiated in Scottish history, Jacobitism was “a political movement in Great Britain and Ireland that aimed to restore the Roman Catholic Stuart King James II of England and Ireland (as James VII in Scotland) and his heirs to the thrones of England, Scotland, France and Ireland.” (Wikipedia.)

Dividing your country is no way to beat a merciless opponent.

Unjust laws and restrictions placed on Scots by London’s parliament, Scottish parliamentarians forever out-voted, motivated Scots to demand  autonomy be reinstated. This was offset by anxieties over the possible return of the Catholic Stuarts and their belief in absolute monarchical power. Presbyterian Scots were, as now, the vast majority, and some, as now, were quite prepared to suffer unacceptable and even brutal London policies than see a Stuart rule Scotland.

Just as with today’s bipolarism that frustrates Scotland’s progress, some inhabitants wanted self-governance reinstated, the push of the Act through the Scottish Parliament illegal, others felt London rule preferable to the uncertainty of what self-rule might bring with it. English politicians were happy to stoke those conflicting anxieties – just as they do now in the face of mounting disillusionment with the Tories, a party that is not known for servicing Scotland’s interests.

Rebellion in the air

News of constant pockets of Jacobite rebellion was common talk. Regret was expressed in elite circles that leniency had been the order of the day over the scattered rebellion of 1715. If London’s Whigs and Tories always vying for power were united about anything, it was leniency was not to be repeated.

As now with Westminster, battered by SNP attacks over a power grab and the disillusion of Holyrood, London grew tired confronted by what they termed ‘grievance politics’. (A familiar term.) From an Englishman’s point of view educated to believe Scots an uncivilised unruly people, English rule was good for Scotland, so why complain?

Enter the Duke of Cumberland

In time our English ‘guardians’ decided they needed to teach the Scots a lesson they’d never forget. The massacre at Glencoe was not enough. One clan was  a hundred too few. The clans had to be broken up. In stepped the His Royal Highness William Augustus, Duke of Cumberland, a man who commissioned more portraits painted of him than  there are crofts in Skye.

English garrisons had sprung up all over Jacobean Highlands and parts of the Lowlands where Jacobite loyalties remained intact. They were there to subdue dissent, quickly and easily pulled together to rout Prince Charles Edward Stewart at the Battle of Culloden in 1746. Though over 2,000 clansmen were slaughtered, survivors regrouped proving the Jacobite spirit could not be extinguished.

Cumberland calculated rebellion had to be confronted with extreme prejudice, as generals say today, resistance, defiance, protest quashed once and for all.

Together with the Secretary of State for Scotland, John Hay, the 4th Marquis of Tweeddale,  and a group of no-mercy English parliamentarians, Cumberland decided on a campaign of ethnic cleansing.

The rebuke often thrown in the face of angry Scots that English power has never ever resorted to the violence of ethnic cleansing is, quite frankly, bullshit.

In the summer of 1746 Cumberland unleashed a reign of terror from the Great Glen onwards and south in a scorched earth strategy. The march of terror included putting young boys of twelve years of age and upwards to the sword who might grow to support the Jacobite cause, and pillaging and burning farms and homesteads. Jacobite soldiers and sympathiser were summarily executed.

Cumberland’s independent raiding parties were given a free hand to do as they please, to plunder and to lay waste. Cattle were rounded up and grain confiscated. Cattle and horses not slaughtered were sold off as booty.

Of the 3,471 individuals rounded up by Government forces in the months after the battle 936 people were deported as indentured labourers. Call them slaves. They were sent to both “his Majesties plantations beyond the seas, there to remain for a space of seven years” as also to privately owned plantations. Records show 150 prisoners left Liverpool on The Veteran for the Leeward Islands in the West Indies on May 8 1747. The passengers lists give detail of those on board, who included men such as Robert Adam, 18, a labourer from Stirling. Described as a non-combatant – with “brown hair, smooth face” – he was captured at Carlisle on December 30 1745.

Barely a handful of men were given a trial.

To consolidate England’s power Fort George was built at Ardersier to the east of Inverness, the most fortified fort in Europe at that time, an emblem of the Hanoverian government’s determination to tame Scotland absolutely, and keep the Protestant dynasty unthreatened. The fear campaign against papist autocracy was in full swing.

The Death of the Clans

The next thing to happen was the withdrawal of the power from clan chiefs. Here again, contemporary opponents are ready to claim only Scots cleared Scots from their land. This is true to the extent Nazi intimidation determined that captive Jews herd captive Jews to the gas chambers. It was do it or die.

Motivation to enforce draconian injustices came from legislation banning clans, banning the carrying of weapons – search and strip was a common occurrence – and the banning of heritable military tenures outlawed to destroy the legal basis of a chief’s power.

Estates of rebel clan landowners were forfeited to the Crown. Episcopalian meeting houses were also outlawed, places of ideological support for the Jacobean cause. Large groups of people congregating were suspect and scattered. The brutality was easier to exploit in the Lowlands where Jacobitism was unpopular.

Scotland Bowed but not Cowed

Aside from Cromwell’s bloody attempt to quell Scots and hand Scotland to the English Crown, Cumberland’s brutality stands to this day as the heinous crime it was, genocide wrought on Scots by England’s armies.

The intention was to impose ideological conformity … and we can see that exact strategy today in the three Unionist parties demanding allegience to an alien government, and the threat of  economic sanctions if Scotland dare try to regain its pride and constitutional rights.

Culloden and its aftermath made Scotland an easier vassal state to control. And so it remained until the middle of the twentieth century, resistance mollified by wealth brought to Scotland by participants in the British Empire.

Today, Westminster fans the flames of fear and uncertainty, that an independent Scotland will be a poor Scotland. The circle of Unionist power is closing the gap once more, but in truth the Union no longer exists, inexpertly deconstructed by England’s wish to be great again.

NOTE: This essay is a work in progress.

10 Responses to Jacobite By Name