The Meg – a review

Would you like salt and vinegar with that fish?

The Meg is a hoot of an action snapper. It’s hilarious for all the wrong reasons, mirthful for the right reasons. Why it’s showing in your local multiplex is easy to understand. The short sleeve shirts that walk around office corridors in Hollywood movie studios calculate  the bigger the shark, the greater the box office receipts.

How in hell was such a decrepit story pitched?

(A long stunned silence from the executives around the board table.)

“No, JS, hear me out. This one is different, this one is Summer Blockbuster – imagine a mega-shark that really existed, still alive and swimming. A true dinosaur, a Megalodon, the biggest giant killer of the seas. The surfer’s worst nightmare times one hundred.”

“Yeah, the Limey guy, Jason Statham. Used to be an Olympic diver. He knows his way around a studio tank. (Clears throat) I’m looking for a $150 million bucks.”

“Risky. Sharks are flat liners ever since ‘Sharknado’. Wait. Can we shape it for the Chinese market? – there’s one point four billion livin’ there who love shark fin soup.” 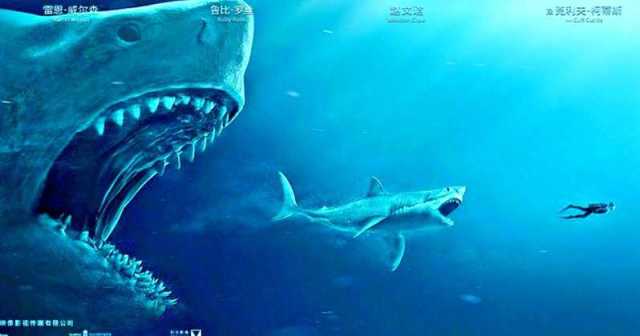 Regular Cockney geezer Jason Statham is our hero. He shaves three times a day and still has a twelve o’clock shadow. Statham is the introspective Cockney, unlike movie world’s other go-to Cockney geezer Ray Winston who’s all wind and piss, more ‘mouff’ than the Meg. We’re used to seeing Statham play tough guys in B-list action movies, usually driving a fast car while putting on a well ironed white shirt and tie from a travel suitcase when the one he’s wearing gets smudged. He’s a seasoned multi-tasker is Statham. (I watch The Mechanic (2011) his best work whenever it pops up on late night television.)

His character is always rough and gruff. Here he shows us his versatility by acting rough and gruff but down to his last wet suit. Statham has three acting looks: quizzical anger, furious anger and d’uh! He always speaks in a hoarse whisper as if visiting a hospital ward late at night. Prematurely bald with a swimmer’s six pack, his one redeeming feature is his eyes. They light up before he knocks you unconscious. He loves his work.

In The Meg Statham swims, dives or pilots a bathysphere everywhere yet never sees as much as a fingertip wrinkle, but acting-wise, he’s well out of his depth.

We begin with the expected action sequence in which Statham is trying to rescue comrades from a stricken research submarine. Time runs out and he has to make the agonising decision whether to risk the lives of those he has saved by pushing his luck trying to save the remaining crew, or  let the crew die and get those he’s saved back to the surface. T-boned by a mysterious undersea creature he chooses the latter.

Back on dry land nobody believes his story of a ‘monster of the deep’. He’s vilified by colleagues and press as a coward and goes into voluntary retreat, a plot you’ve seen ten times before. Cut to idyllic island where he lives surviving on who knows what for food, but avoiding fishing for his supper.

No action hero is allowed to rest for more than a few months before someone comes a-calling and begs him to do one more dangerous job. He goes through the customary sulking and refusal, but we know he will say yes. Statham playing Jonas Taylor – Jonah and the whale, geddit? – learns the deep sea monster has surfaced again and resolves to track it down, like the good scientist he is, and blow it to smithereens.

The rest of the movie is a series of implausibly contrived jeopardy situations in which everybody makes sure the Meg has a chance to swallow them whole. In fact the mouth of the beast is so large teeth are superfluous. Anything it wants to eat it swallows without the quarry ever touching its throat. It simply scoops them up. How a creature so  humungously huge can sneak up on folk without being seen is a complete mystery.

This is one dumb summer show offering. Swatches of dialogue are so plainly idiotic you can’t stifle the sniggering. Other patches are designed to tell us the makers can’t take the plot seriously and you laugh with them. A diverse cast speak in cod marine science, clichés, clunky jokes and hackneyed phrases.

The last third of the plot is taken up with over-the-top scenes on a Chinese beach, a riff on Spielberg’s original, only this time there are thousands of Chinese take-away snacks sunbathing or swimming for the Meg to choose from. When it comes to sharks Chinese prove just as stupid as westerners swimming in shallow waters. Somewhere in the plot there’s a megalomaniac billionaire, Rainn Wilson, who subsidises the research but really wants to capture the Meg. For Meg read King Kong.

Maybe director John Turteltaub thought the barrage of pathos and yuks would distract from the fact that his star is a very big fish that is not very bright. But that’s Jason Statham for you, our box office star. He gets bums on seats.

Do we really have to speak that dialogue, Mr Director?

A word of warning. If the Chinese audience make this movie a winner there are more to come. Look out for another major motion picture based on whatever comes next in the sequence of Meg novels by author Steve Allen, the Dan Brown of ancient oceanography. Yes. There are novelettes. There’s Hell’s Aquarium, the fourth book in the Meg sequence.  Get your hand out of the goldfish bowl. Don’t feed them! Don’t feed the- aaaaargh!

The Meg, a Chinese co-production proliferated with product placement – characters practically hold the product can to the camera – is neither good fun nor bad fun. It lacks any drama or tension. We play the next scene in our heads to compensate for the boredom of the scene we’re watching.

Oh, I almost forgot: there’s a cutesy-pie, wise-beyond-her-years kid who, in several acts of questionable parenting, is taken along for every dangerous journey and left on her own to play until mummy gets back. Her mother, played by Bingbing Li, is Statham’s love interest. This has her trade some of the worst romantic repartee you’ve ever heard. The Meg is a film you see if you’ve lost your best friend and want your brains washed out.

5 Responses to The Meg – a review