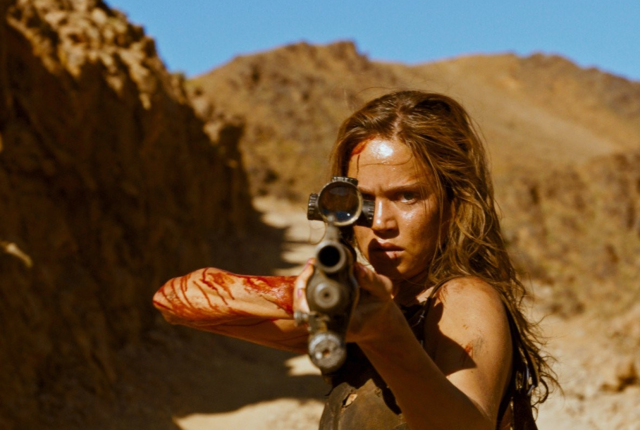 Matilda Lutz gives it all she’s got, including a pump action shotgun

The creator of this exploitation movie, a woman, is asking us to think seriously about the pornography of sex but is she asking us to think about the pornography of violence? I’m not so sure. I hae ma doots. The film faces us with a dilemma – to accept its standards that exploit extreme male misogyny to show us extreme misogyny is bad, and too often manifests itself in violent crime against women.

Revenge is a blood bath. Buckets of blood doesn’t describe the seamless gush and flow. Blood is everywhere, on half-dead naked bodies, on floors, carpets, walls, ceramic tiles, (I like precise detail) desert sand, rock and suffused in water.

Subtle it ain’t. This is Grand Guignol. The term is derived from the Parisian theatre that specialised in shlock-horror plays – lots of ‘orrible murders and blood, smoky interiors, and sharp lighting raising reality to fantasy levels. The gruesome and the macbre was the Pigalle area theatre’s specialism and notoriety. The writer-director is French which might account for the gore and heightened reality, almost cartoonish.

At this point I have to express an interest. I penned a dark detective screenplay based on a Glaswegian-set short story that is a female revenge plot. Revenge is a different angle. My plot concentrates on the sources of  male violence on women, and women’s pain and anger. It looks at the psychology of male aggression. Revenge looks graphically at male aggression. That’s not to suggest my way is better. There are alternative methodologies to explore the subject matter of rape. Revenge is one of many stylistic choices.

The basic plot: a strangely naïve young woman, a peroxide blonde of course, hoping to make connections in Los Angeles to start her acting career, hooks up with a handsome, wealthy married man for a short bonking stay while he does some hunting from his Arizona Desert home. (It could be New Mexico, but the studio hand-out details says Morocco, her  lover French, which makes sense, yet she’s a hundred per cent LA Valley Girl.) Once the assault on her is ended the rest of the story is devoted to a chase as she turns herself from passive airhead into a Grim Reaper of vengeance incarnate.

Not a new scenario, one as old as the hills, but here expressed with great assuredness, a fine visual imagination, some wry symbolism, and four characters who are true to type. You can sum up the overall look of the film as super-slick. 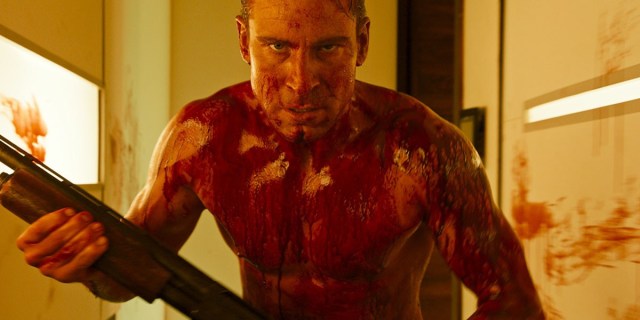 I had not heard of the writer-director. (A ton of good talent out there passes me as I reach the age where I try not to squander my reducing hours on planet Earth in a darkened auditorium.) Coralie Fargeat, makes a truly impressive, uncompromising debut. I can’t yet say she’s a consummate writer. What dialogue she gives us is terse and limited, but it sounds right when spoken. The film is almost all action.

Matilda Lutz plays Jen. Her companion, Richard, Kevin Janssens is married to someone else. He speaks French. Subtitles pop up on a need to know basis. For the first twenty minutes the camera lingers on Jen’s face and her butt. That’s what lascivious men do, correct? There’s an undressing scene to give us depraved (deprived?) men an extra-thrill.

When Richard’s hunting pals, Stan, (Vincent Colombe) and Dimitri, (Guillaume Bouchède), show up, rifles and bullet belts hanging casually over their shoulders, emblems of male power, they regard her as a sex object same as her sleazy partner.

Things escalate fast. The men are predatory. First Stan rapes Jen, later the  passive amoral Dimitri who ignores the first assault; and finally Richard, (surely his diminutive Dick is intended – as is my pun) who proves to be the worst scumbag of the bunch.

At the halfway stage Fargeat has us braying for their blood, and we get that in skip loads. Here fantasy takes over as wounded characters never suffer shock or their bio-systems shut down, with the notable exception of Jen who shuts down multiple times.

The chase sequences takes place in the desert, around sand dunes, up and down screes, in rock caves, and on dusty mountain roads. No matter where a character hirples barefoot a trail of blood is sure to follow. On the journey of hunter chasing prey Fargeat gives us sly comparisons between what then men said and did to Jen in the house and what they say and do to each other in the desert.

As the protagonist, Lutz gives us a startling transformation from woman to warrior, without us questioning how she learns to outwit the bastards there to kill her a second time. From a wound that would kill most folk, she heals herself with some peyote, (a new pain killer to me. I prefer coffee) a cigarette lighter, a hunting knife and an empty beer can that she cuts to perfection with the skill of a brain surgeon. That beer can turns into a major symbol of her new-found resourcefulness, but I won’t spoil the surprise for the reader here except to say the words we see ought to be reversed – a classic film flub.

Revenge is a revenger’s tragedy, in the Jacobean dramatist tradition of John Webster. Feargat teases us with embarrassing familiarities and then pushes us back, repels us with  soaring  violence. It is rather like being on your normal bus home minding your own business only to be confronted by a violent fight and nowhere to escape it.

The film is right on the ‘Me-Too’ button. We get a slice of male aggression to think about. Fargeat at once exposes what’s wrong with her chosen genre and demonstrates her mastery of it. The climax is extended, possibly to the point of the ridiculous, with the inventible superhuman elements and the three-times killed who rise again to scare or continue their gory mission.

The austere beauty of the desert scenes relieve our tension and give respite from all the blood. Though Revenge exploits sex and pornography to make a valid point using a sledgehammer, as an action thriller you can’t help admire Fargeat’s skills. And you know she will be given a studio big budget feature to direct very soon if not already.

But do we need so much blood? Nurse! Forget the Elastoplast!

3 Responses to Revenge – a review