The Sorrow and the Shame 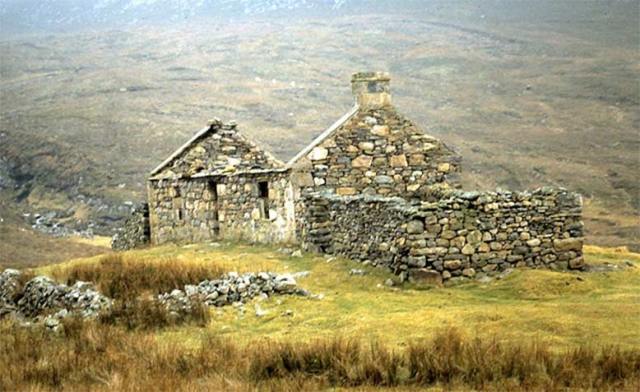 If clearing people from their land by force is not cleansing, what is it?

The term ethnic cleansing to denote over a hundred years of clearing Scots from their land is a phrase rejected by those who see Scotland’s ills issuing from its weather, strange culinary habits, an odd language, and a people a little too inclined to be chippy. Alba, it seems, is full of vexatious people who do nothing but complain.

Using ‘cleansing’ is condemned as out of context, erroneously contemporaneous, too emotional because it was often Scot against Scot that did the dirty work.

Well, I have news for slimy proselytisers. It was Jewish guards given temporary preferment who hustled Jews to the gas chambers, less their belongings and clothes. They had no choice. It was do or die. Who would dare not call that barbarity a cleansing?

Evictions, deportation in all weathers cause deaths, especially of children, pregnant mothers and the elderly. Many Scots died from the vicissitudes that befell them, some from losing their wits, and more perished on the emigrant ships.

After the battle of Culloden – its repercussions I explain later – British rule arrived with a vengeance. New laws and taxes were imposed on Scotland leaving only the most rebellious prepared to protest. Clan chiefs found themselves in the invidious position of being landlords forced to report on their clan’s behaviour monthly to prove they were loyal to the British Crown and keeping the peace.

Colonial power always avers it’s for your own good

The Clearances – and I refer to both the Lowlands cleansing as well as the Highlands, were carried out over decades not a few intense years, often without witness or written record. You have to search for court summonses and eviction orders, or rely on the oral tradition to find detail of village clearances.

Those who died on the journey south or out of Scotland given an unmarked pauper’s grave. Keep in mind, only 7% of Scotland’s population lived in large towns making it fairly easy to evict people living in remote areas, and do it without fear of reprisal.

The heartless try to tell us life was hard, houses hovels, people lived in appalling conditions, a truism of other agrarian societies in France, Italy, Spain, and most of the Balkan countries, none of which cried out for English intervention to restore them to economic health. The ‘hard life’ theme is the apology for clearing thousands off the land they tilled and their forefathers before them.

English rural dwellers encountered a similar fate when Westminster decided full-blown capitalism was a core principle goal of a civilised nation, workers needed for the industrial revolution, but in Scotland evictions were comprehensive, enforced, savage and relentless.

There were two distinct types of ‘clearance’. The first was forced settlement on barren land usually near the sea. Homes were burnt and tenants forced to leave at the point of a sword or musket, carrying little or nothing as they headed towards an unknown fate.

Clearances of 2,000 a day were not uncommon. Forced eviction was one method, draconian rent increases another.

A lack of documentation is not a lack of evidence

An absence of an official record is very convenient. It allows discounters of history freedom to claim almost anything they want. They can describe lost communities as progress, villages ‘abandoned‘ rather than the vestiges of evictions. They can avoid the pain and suffering, they can dismiss the stench of authoritarian rule. They don’t have to talk about individuals or specific families; they can talk in generalities and platitudes.

Sadly for apologists there are written accounts. Here is one, published in book form, (I have a copy) by the eminent geologist Sir Archibald Geikie, an honest witness to evictions on the Isle of Skye. Readers will forgive his use of ‘valley’ that should be glen.

“I had heard rumours of these intentions to clear people off their land but did not realise they were in the process of being carried out in effect until one afternoon, as I was returning from my ramble, a strange wailing sound reached my ears at intervals on the breeze. On gaining the top of one of the hills on the south side of the valley I could see a long and motley procession winding along the road that led north from Suishnish. It halted at the point of the road opposite Kilbride, and there the lamentation became long and loud. As I drew nearer, I could see that the minister with his wife and daughters had come out to meet the people and bid them all farewell. It was a miscellaneous gathering of at least three generations of crofters. There were old men and women, too feeble to walk, who were placed in carts; the younger members of the community on foot were carrying their bundles of clothes and household effects, while the children, with looks of alarm, walked alongside. There was a pause in the notes of woe as a last word was exchanged with the family of Kilbride. Everyone was in tears; each wished to clasp the hands that had so often be-friended them, and it seemed as if they could not tear themselves away. When they set forth, a cry of grief went up to heaven, the long plaintive wail, like a funeral coronach, was resumed, and after the last of the emigrants had disappeared behind the hill, the sound seemed to re-echo through the whole valley of Strath in one prolonged note of desolation. The people were on their way to be shipped to Canada.”

Once the Treaty was signed in 1707, and after the failed resurrection against English rule at the Battle of Culloden in 1745, when ‘Butcher’ Cumberland rampaged on a mission of genocide against survivors and innocents, British authorities acted hard and decisive to suppress clan loyalties.

British imperialism has rarely confined itself to extractor of wealth and resources. Imperial rule has to alter a non-English speaking society to its own image in order to sustain its hold over the people and the land. You enslave a people and then teach them how to play cricket to show you mean no harm, and to give the false impression they are one of you. In the case of the Clearances the tale of repression included prohibitions.

A musket barrel’s perspective of the Clearances

1708: England increases taxes on the Scottish population to be collected by clan chiefs, the annual sum gathered to repay half the loan given to Scottish nobles who lost money on the Darien Schemes, the schemes blocked by England’s trade war.

1720: The Disarming of the Clans Act forces warriors and their families to leave Scotland.

1725: Propelled by sustained unrest over the Act of Union, General Wade upgrades cattle trails to proper roads and bridges – from one English loyal garrison to another.

1730: England’s demand for cattle and sheep increase ten-fold – the Highlands the place to graze them. Clan chiefs encouraged to shift their people off the best ground.

1746: After the Battle of Culloden Highland stragglers, those without a home – sent to the Caribbean as slaves.

1747: Heritable Jurisdiction Act imposed – Highland landowners must accept English rule or forfeit their land. Many clan chiefs step down and move south, some to London.

1762: Clearances is full spate all over the Highlands and spreads to the Lowlands. Some Lowland villages flattened to incorporate the land into a single one-owner estate.

1788: Donald Cameron of Lochiel begins clearing his lands of villagers and farmers.

1791: Records show over 7,000 people emigrated from Inverness and Ross lands.

1792: The ‘Year of the Sheep’ – it is estimated that there are now more sheep than people north west of Perth. Sheep deemed ‘more profitable than farming’.

1800: Edinburgh and Glasgow turn cities as Highlanders and Lowlanders leave the land.

1807: Highland economy collapses. This is the excuse given for the need to reuse land for ‘better’ purposes. A calamity wholly man made is exploited to propel greed.

1811: Clearances begin in earnest in Sutherland under the auspices of the Duke and Duchess of Sutherland. In 1811 the scattered population was recorded at 1,574. By 1831 the number was 257, most serving the Duke’s estate.

1816: Patrick Sellar, a factor who burned down cottages, walks free from court.

1900-1958: With two world wars concentrating the British mind, Clearances continue without pause placing great swathes of Scotland in the hands of a few wealthy owners, leaving tenants with few rights.

1960 – Present: Large tracts of supposedly infertile land in the Highlands and many Islands change hands for millions of pounds, Gruinyards included.

Those who resisted eviction saw their home razed to the ground

If there exist still people in Scotland who think they are safe under British rule they are condemning themselves and the rest of us to the destruction of Scotland as a nation state. Can you understand the fury that issues from being a perpetual colony?

What difference is there between the vengeance exacted upon Scotland after Culloden, and the reprisals enacted by Westminster now? The repercussions from that lost plebiscite on the fateful 18th of September, 2014 are barbed wire ‘Made in England’.

In no special order: artificial austerity imposed on a wealthy nation, forced withdrawal from Europe, grabbing of Scotland’s powers by Westminster; loss of welfare rights and pensions, forced repatriation; Scots regiments moved south, shared institutions closed in Scotland, empty shipyards where naval vessels were promised, removal of worker protection rights; bedroom tax; the drip, drip withdrawal of the Barnett Formula, theft of Scotland’s oil, the swell of English xenophobia infecting British life, sustained smearing of our Parliament as a useless executive – they all amount to teaching the natives a lesson they won’t forget.

The people who voted against Scotland’s right to govern its self once more, those who blocked a wealthy country from its legitimate civil rights, are petty accomplices in the clearances of modern Scotland. What they missed was obvious. We are at a point where Westminster under Tory and its alter ego Labour aim to keep the populace uncertain, busy watching our backs, our tomorrows not quite guaranteed. They are imposing constant political upheaval, or as Karl Marx put it, “an uninterrupted disturbance of social conditions, everlasting uncertainty and agitation”.

Liberty happiness, autonomy, individuality, spirituality, self-guided development are ideals we all are heir to. There is only one way to realise the clamour for Scotland’s permanent freedom, and it isn’t inviting more tourists to visit the Highlands to take picturesque snapshots of a banished civilisation.

In the face of increasing colonial power where one nation is manipulating the other, Scotland’s worst enemy is apathy and passivity. Toss away the hand-me-down sliver of Union Jack. The label should read ‘Made in Scotland’.

75 Responses to The Sorrow and the Shame