The Last Jedi – a review

To begin with a warning: when reading this review keep in mind Disney bought the Star Wars franchise from Lucasfilm in 2012 and are responsible for its reboot. It is conceived as all Disney productions are conceived, to a corporate aesthetic. I mention that because it lowers expectations of anything new or exciting happening other than a rehash of the old mixed with the new-ish. You like candy floss, you get lots of candyfloss.

I just about remember the freshness of seeing the first Star Wars. Despite its ground-breaking special effects, it was a Saturday afternoon matinee film given top billing in the evenings by public demand, and the series has remained a matinee action flick.

George Lucas practically killed off mature adult stories with his Star Wars franchise and Indiana Jones adventures; he infantilised cinema. French cinema took the biggest hit, dominant in European filmed culture up and until that point. Queues lined up to see Lucas’ flash, bang, wallop extravaganzas staying away from films that make you think.

It took almost four decades for cinema to recover and give us a wide range of adult subjects again, but here we are once more watching Number 8 in the saga. And believe me, at two-and-half hours it feels like four. No, five.

Criticising Star Wars as nothing more than empty science fiction is liable to bring down on your head adoring fans ready to dice you in equal slices with a swing of their light sabre. So here goes nothing.

Is this a dagger I see before me? – no, a light sabre with a dead battery

No action, no problem, no issue, no dispute in Star Wars is resolved without a battle to the death. Life is one long war of attrition followed by a war of annihilation, until somebody says smugly ‘mission accomplished’, which one character almost does in Last Jedi, only to swallow her words as another battle appears on the horizon. I guess the clue is in the title – Star Wars. All characters live a life of perpetual jeopardy. Nobody has a hobby or preaches peace.

John Williams Nazi rally music is here again to boost patriotic feelings and make us understand we should kill anything that walks if we are to achieve world domination. The theme is in every nook and cranny. There are no quiet moments. Sounds is turned up to eleven and then twelve.

Critics tell us this film is full of twists and turns. And so it is. After the umpteenth wholly contrived misdirection I started yawning, then leaned heavily to one side like a ferry boat listing. “Not anither wan?” ran through my mind, to quote the old dear on UK elections. The new reclining seats in my cinema were installed in the nick of time.

If you try to make sense of the crushing junk script it will suck any intelligence clean out of your skull. And there’s none of the fake Shakespearian philosophical discourses so beloved by Sir Alec Guinness and Yoda. (Yoda makes an appearance. I groaned.)

Only three actors do any acting, Daisy Ridley, Adam Driver, and Laura Dern given all the kick ass lines ever written. Women’s liberation, according to the Hollywood bible, is doing and saying as tough men do. All the others put on costumes and play the stereotype, a Lucas hallmark. They are so wooden a Stormtrooper seems human in comparison. However, there’s a scene in the middle of Jedi that’s significant.

The sequence that takes place in a neo-medieval island hideout where Luke Skywalker, (Mark Hamill) sulks his life away – images of Achilles in the Iliad. To be candid, we see and hear too much of the scruffy misanthrope. Actually, Hamill was badly injured in a car crash just as his youthful star was rising and then almost forgotten as an actor. The tragedy might well have fired the writer’s ideas for reinstating his character.

Just as I was working out which Scottish island the scene was shot – Skellig off the west of Ireland – up popped Rey, (Daisy Ridley) introduced to us as the contemporised feisty femme in The Force Awakens, (2015). 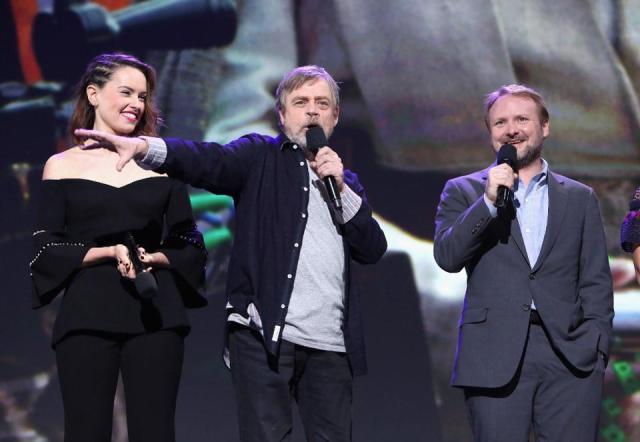 Mark Hammill (centre) giving fans what the like. (With Ridley and director Rian Johnson)

Rey has gone to that dark, windswept rocky retreat in the hope of persuading hirsute Luke to go walkabout with her and join her, and other heroes, in the Resistance. Their aim is precise and singular: to defeat the First Order—to which Ben Solo, (son of Han and Leia) now known as Kylo Ren, (Adam Driver) has sworn life-long fealty.

This is where the visuals get fascinating.

In melancholy mood Rey enters a hidden place in which she faces a vast subterranean mirrored rock face, and, confronted by her reflection, reaches out to it only to see a dozen or more identical Reys, all moving in unison, and then moving in reverse sequence that recedes to infinity. The image is arresting, Duchamp’s Nude Descending a Staircase, a way of witnessing her power and her uncertainty. So far, so good.

This becomes a question of Rey’s identity – not a new idea, I grant you, but in expression visually refreshing. Unfortunately thereafter it reads like ploy to give Rey substance, to make us believe she’s human and doth bleed.

Like so much of the movie’s twists it offers us sub-text that never quite manifests into concrete form.

The rest of the story follows the Resistance led by General Leia, (Carrie Fisher in her last role) to survive and escape a Lucas standard set piece, the mass galactic onslaught, this time led by the First Order’s pompous General Hux, (Domhnall Gleeson, son of Brendan) and its Supreme Leader with the silly name, Snoke, played by the great Andy Serkis, Hollywood’s most employed actor rarely seen. The arch villain is always seated on a throne these days and ugly as sin. Driver grimaces and snorts. There is no indication why his Kylo Ren loves the Dark Side. He’s just another common sociopath.

The director of all this pseudo-science pudding and Poundland religion called ‘The Force’ is Rian Johnson straining to be an auteur, but showing he can’t hold onto a logical line in the way he almost managed in his film Looper, (2012). Johnson must hate his audience to play so many teasers on us that amount to a cruel annoyance.

The best and the average cast members don’t get a chance to develop their characters or breathe for more than a minute. The movie’s suit is cut too tight, the story line held tight by mixed edits, flash backs, flash forwards, and last second sounds crashes – everything is down to a time running out cliché.

The visual images are more complex than ever but presented with absolute assurance and skill. Battles end up looking like a Jackson Pollock action painting. This is where lie the real talents, the real gifts of the film.

If you ever get an opportunity to visit the Pasadena College of Art and Design in Los Angeles you must take a look around the Department of Graphic Illustration. It is mega-impressive, it’s output eons ahead of anything you will see in a UK art college. The students are gifted. By the second year of study their work is ready for sci-fi comics and films. That’s what we marvel at in this Star Wars episode, the scenery, the back drops, the moving planets and galaxies, the digital magic. 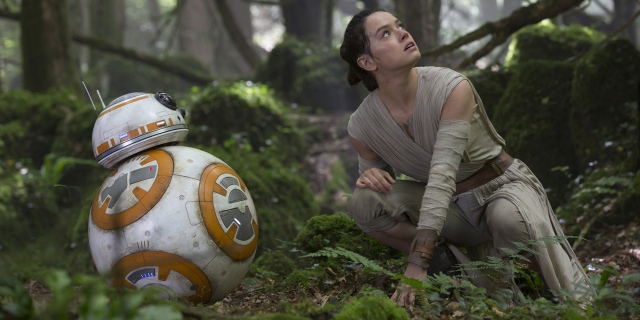 I’d swear that robot thingy has put on weight

As with each succeeding Star Wars movie I’m left wondering what the theme is about. Opening titles flying off into space tell us it’s about the Resistance. Main characters are all able to command by mind control, the USA’s next great weapon in its arsenal. You dispel rationalising flawed character relationships realising the theme is greatness, the power of American imperialism, and the ultimate sacrifice for your country.

The Last Jedi is solid US war propaganda. Like American foreign policy, the war to end all wars is never-ending. And I haven’t mentioned the unashamed marketing of Star Wars paraphernalia that accompanies every episode.

There are three more scripts in development. For my part, the Star Wars saga ended in the last Millenium with Return of the Jedi.

14 Responses to The Last Jedi – a review