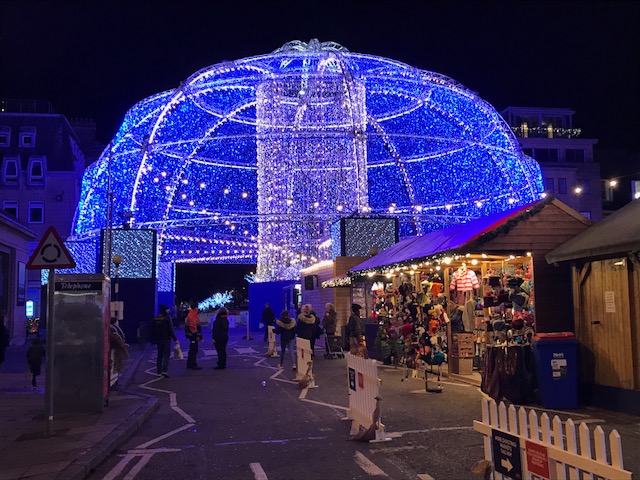 Edinburgh’s George Street festive illuminations are attractive from a distance, a bit of a disappointment close up, like the promises made by Scotland’s opponents.

A year of marking time

To my mind the funniest political episode this year was the stramash over Alex Salmond selling his political chat show to Russian Television. To the rabid right-wing press, the political crime of the decade is Russian Television’s propaganda aimed at our society. (The accusation is, of course, British propaganda.) The effects of the crime are undetectable, unlike the massive effects of interference by corporate power and private wealth in government policy and taxation, not considered a crime, merely the normal workings of democracy.

Scunnered at puerile press speculation of Nicola Sturgeon ‘shelving’ a second plebiscite on Scotland’s future, or only ‘delaying’ it, “I mostly” concentrated on emphasising how much Scotland’s economy and daily life remain a depressing post colonial existence. I didn’t plan essays that way. They evolved. The more I researched British colonialism the more it became neo-colonialism; comparisons grew and grew. It got to the point I could lift almost any callous remark from a Tory or Labour politician and find its doppelganger in one spoken to Hindus under British rule.

Add to all that the corporate strangulation of European influence and tax regulation and our impotence to stop unalloyed greed, and you have a model of Scotland as a colony in the 21st century. To hear thumping mediocre unionists with connections to big business sitting in Scotland’s Parliament doing their very best every day to tighten that deathly grip, envisages the Wicker Man bringing firelighters to the pagan ceremony.

When the sun is shining, you’ve a full belly, enough money to buy a pint and see the match, repeatedly told self-reliance is bad for Scotland’s health and your children’s future, you won’t perceive you live in a politically undernourished society. You become blind and deaf to what you don’t have.

The opposition in Holyrood sucks, but suction kills

People might agree some of Holyrood’s opposition MSPs are poor value for money, but the same are slow turning frowns into vigorous resistance against a proliferation of fifth columnists accessing Parliament. I can’t find their equivalent in England, thousands of Scots beavering away to undermine England’s self-esteem and steal its wealth.

There were weekends it was a relief to write about the car industry or publish a humorous film review, so enraging is Westminster’s hold on Scotland’s maturity.

The top ten essays read and reread this year

Here are the top ten essays this year to the nearest half-thousand, with a link for readers.

Readers pull favourites out of the archives regularly, The Infamous Ledger, Torrance the Terrible and A History of Brief Time, are three perennials, the last my thanks to Scotland’s elderly, septuagenarians and octogenarians who voted to reinstate autonomy. Some reactivated essays I’d forgotten I’d written, some I’d prefer to rewrite.

I have no idea what 2018 will bring, but I know there is more fear in the world that last year, thanks to Trump, May, Spain’s Rajoy, and Scotland’s chronic inability to have confidence in itself. But here’s to 2018 just the same.

This year 2017 Finland celebrated 100 years of independence – and no ill effects!

Wish it was Scotland