A weekly guide to all that’s rotten about car ownership, plus some good bits

Elon Musk, founder and CEO of Tesla is at it again. He announced the production of a truck, two of them, one big and one small, and to the surprise of press and public alike, he also unveiled a hyper sports car on the same day.

At an event in Hawthorne, California, Musk said that his new machine, which has simply been referred to as the Tesla Truck until now, given the brand name Tesla Semi, is capable of accelerating from 0-60mph in 5.0sec. Gulp! Chasing a stolen one will be a nightmare for motorway cops!

I had immediate concerns about a truck that accelerates faster than my wee Smart car can when trying to overtake in a rainstorm, a shower of truck wheel spray hitting my windscreen. Further reading  discovered the truck sits much lower to the road than conventional big rigs. Your car’s windscreen should sit higher.

He said it was also able to hit the mark in 20 seconds even when laden with a trailer fully loaded with 80,000lb (almost 36 tonnes) of cargo. No diesel-powered truck can match that whether shifting your IKEA flap pack furniture from  depot to store, or your furniture in a flitting. Rivals can look to a slothful 40 seconds or thereabouts.

The lorry’s (English parlance) energy recovery systems are claimed to be capable of recovering 98% of kinetic energy to the battery. For regular charging, the lorry can be connected to so-called Mega-chargers, which is a new high-speed DC charging solution, that is said to add about 400 miles in 30 minutes and can be installed at origin or destination points, much like the existing Superchargers.

The mega-charge time is the solution electric car owners have been looking for, bringing mid-motorway journeys down to a 30 minute boost or less while having coffee and a donut, if your car’s battery power maxes out at 400 miles.

The streamlined look of the Tesla Semi truck is made possible by the battery pack mounted under the floor of the cab, and the driver’s seat mounted significantly more forward than of those the Freightliner or International trucks. Behind the cab, the two rear axles have electric motors attached on either side, for four in total. They come off existing Tesla models.

The design gives the Tesla Semi truck a lower centre of gravity than diesel-powered models, something the company has said about its cars relative to rivals with internal combustion engines. While it won’t make a truck handle like a sports car, it should assist good high-speed stability. Efficiency is boosted by a low wind resistance, with Tesla claiming that its Semi has a drag-coefficient of 0.36Cd. It states that most of its competitors are closer to 0.65Cd, which is true – Eddie Stobart be advised.

Musk claims the vehicle features advanced autonomous technology. On-board sensors are installed to detect instability and can adjust torque sent to each wheel and independently actuate all brakes to prevent jack-knifing.

Production is set to begin in 2019, orders taken now reserved for $5000. Wallmart has ordered a brace of them. 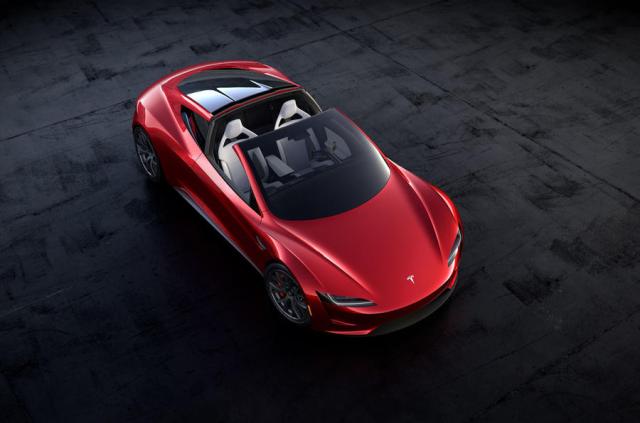 A truly super hyper sportscar, but sure to be too costly for the average open top enthusiast

The other jolt was the announcement of a sportscar than can zip from a standing start to 60 mph in 1.9 seconds – warp speed, Captain Kirk – making the task of fastening your seatbelt after you drive off an impossibility. It has a 630 mile range, more than enough to get you from Edinburgh to London without a battery boost, and from Aberdeen too.

The Roadster will have three motors. One in the front to drive the front wheels, and two in the rear to drive the rear wheels, giving the Roadster all-wheel drive. The car is a 2+2, meaning it has two full-size seats in the front and two smaller seats in the back. If you have one average size pimply adolescent or two small children they have a place to sit in the rear. Or a pacified pooch.

Musk maintains the Roadster will go on sale in 2020, although that figure is speculative given the problems and delays Tesla has faced getting its other cars to market. Tesla predicted 1,500 saloons deliver by now, but the number is somewhere closer to 650.

The Roadster is technically up for pre-order. You’ll need the pound sterling equivalent of $50,000 as a deposit, an indication the car will cost over £100,000 on delivery. Goodness knows what the insurance cost will be, but under current legislation the Road Tax will be £30. I’ll just have to wait until Mazda electrifies the modest MX5. 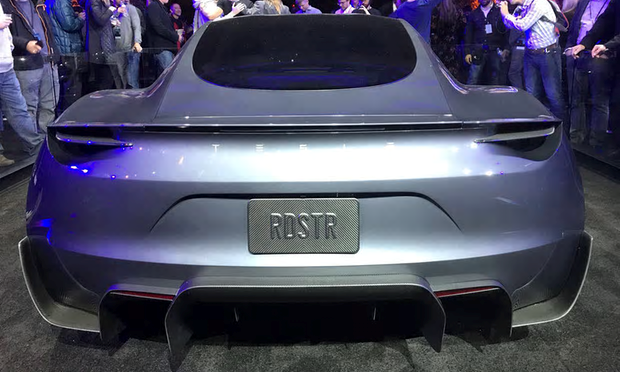 At that cost you wonder what is the point of yet another fast car aimed at the wealthy, given Musk’s stated aim for Tesla was to make electric cars mainstream. He clarifies his policy – start with high-priced cars to fund the development of the cheaper and more mainstream models. Musk has the answer – indeed, he has the answer to almost everything except poor suppliers who have delayed production of his salons.

“The point of doing this is to give a smack-down to gasoline cars,” said Musk at the launch. “Driving a gasoline sports car is going to feel like a steam engine with a side of quiche.”

Back to the trucks: I don’t know what readers agree with me but I’d rather see goods delivered by rail, and trucks on roads reduced to a maximum number at one time. Even so, the Tesla Truck is a gigantic step forward in commercial goods transportation.