An odd tweet appeared on my timeline. There was something clunky, something unnatural about the sentence construction. I answered it warily. Back came a second lifeless response, both short staccato sentences. I did what I usually do before encouraging further dialogue, I checked the site. It was a computer, or some sort of bot.

There was a man’s face as avatar, smiling, and the usual brief  biography. I checked his credentials as far as I could – nothing. He didn’t exist. It was all fake. Artificial intelligence – rather like Scotland’s Tory party. I pulled the plug on it.

A second opponent appeared a day later, a woman this time, but the sentence construction was that of a man. Past participles were left hanging in the air like icicles. ‘She’ tried to ingratiate herself saying she was a Scot, a long-time resident in Spain, voted Yes to independence – not sure how she managed to do that in Spain – but was virulently against Catalonian freedom. Ironists are often the victim of their own irony.

I wondered how often that is the case, is still the case, in the debate English colonialism versus Scottish sovereignty, an argument waved along on as many false premises as false identities. Advice, first check your opponent’s site to see what it is they retweet and say.

There are companies devoted to creating artificial answering sites. They appear to be making good profits and expanding. Can’t be beyond imagination to suppose there are a few dedicated to spreading doubt and crapology among the Scottish electorate to the affect Scotland  doesn’t have the chops to survive without England as a crutch.

We are a long distance away from the days tobacco companies paid quack doctors and phony medical researchers to fake learned papers, and make fatuous statements, claiming there is no connection between smoking cigarettes and cancer. Those were real people not computers.

And before Twitter was exploited by crooks and charlatans, we had low-grade scientists and out of work writers paid to showers us, (pun intended) with propaganda that climate change is all the concoction of liberal and green politicians hoping to remove our rights as citizens to pollute the planet. Now it’s the turn of automobile manufacturers to tell us electric vehicles will be a disaster for society and a terrible drain on the economy.

From dawn to Musk

Doyen of electric transportation, Elon Musk, the man making roof tiles that are mini-solar panels, is the most recent subject of an extensive campaign of vilification, misinformation, and mechanical delays to his plans.

This is the man, you’ll recall, doing most to push lazy car makers to innovate. Merely altering a car’s design and making it bigger to attract new customers isn’t enough. Describing  a bigger car as having more room than the last model is not innovation. Musk was feted by the Obama administration. Today he butts his way through a barrage of attacks from right-wing think tanks, iffy lobbyists, fake websites and automobile illiterate commentators.

A ghost in the mother board

There exists a website dedicated to taking Musk down. It publishes a tirade of negative stories about him. (See foot of essay.) The site is similar to another anti-Musk site. The site is the product of an organisation calling itself ‘The Center for Business and Responsible Government’ (CBRG). Business and responsible government is an oxymoron.

The CBRG describes itself as a “non-partisan organisation dedicated to highlighting cronyism and its effect on American taxpayers and policy”. There’s that target again – your pocket. If they can make you believe you will get poorer by living in a cleaner environment, their job is done.

Here is the ghost apparent: they don’t exist except in cyberspace. Not one or the other. By an amazing coincidence both sites were set up simultaneously this summer, registered, as far as I can ascertain, to a domain-name allocation company in Arizona, USA. (Cue unmistakable twang of Ry Cooder’s Paris Texas theme.)

Wading through all the guff printed about Musk and his attempts to revolutionise  personal transport – and soon big rig trucks – and you come across his most trenchant critics, the journalist Shepard Stewart.

As Musk fought back hard and articulate on Twitter, his supporters did some digging. They discovered Stewart was an invention. Everything about him was counterfeit. He was a complete sham. Even his photo byline had been doctored from a LinkedIn profile of a tech entrepreneur.

To muddy the waters the revelation threw up a flurry of theories: that Stewart was created by speculators shorting shares in Musk’s companies, or that he was invented by rival rocket companies keen to bring his SpaceX company back to earth.  Once the truth was out Musk got on with his day, night and weekend job.

The attacks appear to be part of a wider agenda against governments, the environmental lobby and liberals in general – an agenda reinvigorated by the prospect of a Donald Trump presidency. Documents filed with the US Internal Revenue Service reveal that two linked organisations are behind the attacks: the Wellspring Committee and the Annual Fund. Together, records show they large sums to the phony sites. 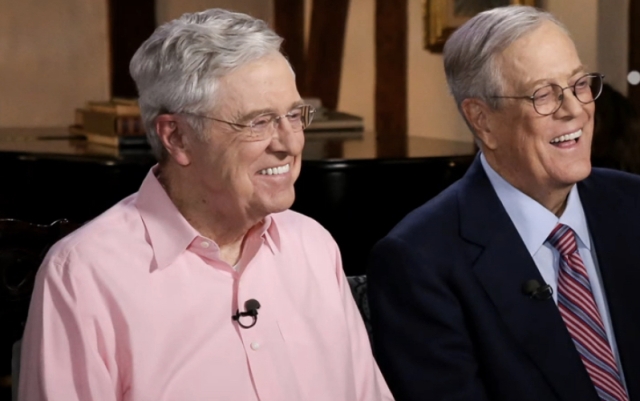 Billionaire Koch brothers. They don’t even bother to hide their political shenanigans, they are that cocksure

Koch brothers at it again

Few people I talk to know of, or have heard of, those two organisations, Wellspring, and the Annual Fund. They should. Wellspring is infamous. I have detailed them before in a past essay; so, here’s a reminder.

They are part of a powerful conservative political network who influence government policy the world over. You might not think they are troubled by little you going about your daily chores, but you would be wrong. They choose benign title to make us feel comfortable, such as “The Institute for the Furtherance of Democarcy” until you bread their guff and realise it out to be called “The Institute for the Enslavement of Scotland“, or “The Campaign to get every African Smoking Cigarettes”. (Such a campaign actually exists.) Their handmaidens are advertising companies, the scourge of truth and facts.

An investigation by the Center for Responsive Politics found that Wellspring was one of many organisations that in the past was used as a “dark money conduit”. Wellspring is owned and funded by the billionaire industrialist Koch brothers, David and Charles, to channel money to their ‘favoured’ causes, which have included climate change denial scientists, Tea Party activists and a host of other right-wing groups, including the Heritage Foundation.

Indeed, the rise of the far-right in the USA, and its popular movement, the Tea Party with its contradictory slap-dash policies, are attributed to the Koch’s efforts to stimulate and encourage anger at liberal doctrine and institutions. By careful combination of pseudo science and hokey philosophy tossed at the masses as Gospel their adherents gradually gained ground. Politicians picked up the crapology and ran with it. “The something for nothing society”, said Labour’s Johann Lamont, inadvertently doing the work of the Koch brothers without getting a grant. The other side, us, was caught sleeping. Liberals and socialists have not yet formulated a counter-doctrine for the modern age.

Knowing all that, no one will convince me that phony outfits in the UK are not receiving largesse laundered through Koch brother outlets, the kind of think tank charged with keeping Scotland linked to the UK and USA foreign policy and economics, servile.

Their main goal is to reduce government powers in the dubious name of lower taxes, taxes the very thing they do not pay and we need to support a fair and caring society. I can’t wait until they too are ghosts.