There’s an overwhelming feeling of deja vu watching professional miserabilists, flatulent unionists, reactionaries, and anti-democrats tell us what a gargantuan waste of time and money is Holyrood Parliament, Scotland’s platform of democracy, just as they did on its inception. Bigots should follow Sophocles, “An unexamined life is not worth living.”

Among the press pack is Gerry Hassan who seems superficially Scotland’s man until you deduce his jottings are painfully muddled and cryptic. His air of neutrality soon falls away. He praises Holyrood’s existence yet, like Marilyn Monroe singing Happy Birthday to President Kennedy, it makes you uncomfortable. Something isn’t right.

He terms himself “writer, commentator, and academic”. Academic is a pompous title. You’re a researcher, a lecturer, or a head of a department. Hassan was a research fellow in cultural policy studies at the amalgamation of teacher training institution and technical colleges that is now the West of Scotland University.

Hassan is King of Waffle. He suffers from a serious literary handicap: clear, concise thought eludes him. His sentences are opaque, convoluted. One idea knocks out another. I defy anybody to make sense of this paragraph even reading it three times:

“Second, and more important in exploring the possibilities of such arrangements, is the presence of political will (and goodwill) to see them a reality. This seems to be lacking from one part of the equation, the UK government, rather paradoxically in that the UK’s political elites have often celebrated their adaptability in governmental and constitutional manners. The UK government has so far, post-Brexit, shown no interest in pursuing a flexible and hybrid approach – a constitutional response so regularly championed within the UK – through a serious consideration of what a geographically differentiated Brexit would like within the UK, as opposed to sector-by-sector deals.”  ‘Scotland, the UK, and Brexit’ written in collaboration with Russell Gunson. (Both are involved with ‘think tanks’.) 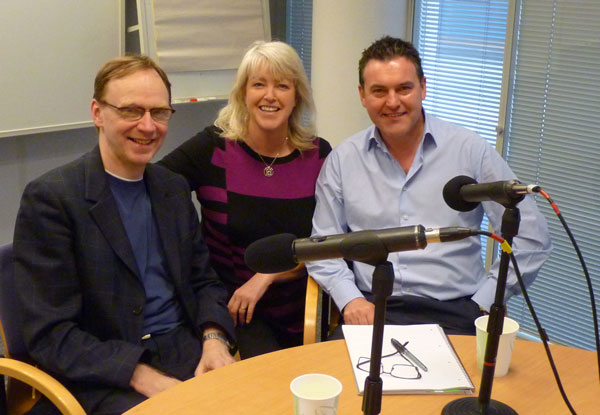 Hassan (left) with Lesley Riddoch, and on the far-right, Kenny Farquharson  (Warning: Hassan is much closer to Farquharson that he appears)

In the cause of high academic standards to which Hassan ascribes, here’s a critique in blue of an abridged Holyrood Guardian article he wrote.

Many good things have happened: land reform (right-wing interests blocked radical improvement) and the smoking ban, and a Scotland more at ease with itself on gender equality, sexual equality, sectarianism and multiculturalism. But in a politics supposedly about difference, many of these gains have been about making Scotland more cosmopolitan and like most other western countries. ‘But’ implies those qualities are bad. You’ve just suggested mature governance is a good thing.

All of this isn’t quite the brave new politics promised in 1997. Really? Electing the SNP was courageous, all things considered. They gave Scotland the plebiscite denied for 300 years and a lot more besides. Much of Scottish politics looks like politics elsewhere, including Westminster. A banal observation. The debating chamber’s seat layout was designed to avoid  confrontation. Opposition parties revert to the confrontational to hide their lack of policies.

Political power sits not with the Scottish parliament, but with the Scottish government and civil service. Power remains resolutely with Westminster. There is an adversarial party politics and the remorseless centralisation of public bodies, such as the creation of Police Scotland (introduced by the Labour Party) with little obvious gain. You’re expected to show proof. Scottish ministers gather more and more power into their hands with few checks and balances, or obvious benefits. When powers are offered where should they go?

Beyond this there has been little devolution dividend: (SNP Bad?) economically, socially, in public services, or in relation to what groups have power and influence. Scotland has its Parliament reinstated and you think there’s been little devolution dividend? It could have embraced a distinct take (is “take” the language of an academic?! More the language of ‘Call Kaye’.) on public service reform that widened the life chances of the disadvantaged, or tackled the systematic exclusion of working-class children from the opportunities they deserve. A gratuitous sideswipe at the Scottish education system. Do you count yourself no longer a successful working class individual, an ‘academic’ created by that very system?

Time has shown the limitations of the SNP, (such as?) which raises questions about where the politics of change will come from, and who can most successfully adopt the party’s mantle. You cannot be asserting the SNP has not made a difference and are on the way out?

The SNP gave Scotland a distinct voice, (Holyrood gave people a voice, SNP gave people a political force. For example, the SNP protected the universal principal in higher education – the very right that you enjoy) but the next decade could be shaped by Nicola Sturgeon’s SNP, Davidson’s newly energised Tories, or a Corbynised Scottish Labour. Or the influence of the DUP, or blocked from the Single Market, or Holyrood struck by a meteor, and so on, and so forth. Nothing in the future can be taken for granted. That’s why it’s called ‘the future’!

This draft has the taste of a David Torrance mouth wash. Hassan begins by stating devolution is a success and then go on to argue it is not a success.

He concentrates on the SNP with wild assertions and innuendo to the detriment of honest scholarship. Amazingly, he makes no mention of how the advent of Holyrood has given people hope, or how Westminster schemes to undermine hope. Scotland’s Law Society state, even in non-devolved areas, the Great Repeal Bill can “remove the legislative competence of the Scottish Parliament”. Hassan’s article is lazy, contradictory, cribbed from his Scotsman article of December 2014. Very disappointing.  3/10.

Hassan is the railway passenger in the First Class carriage with a Second Class ticket. He lost a bet with the editor of the Wings Over Scotland website, belatedly sending the money to a charity of his own choice, robbing his winning opponent of the debt.

Revealingly, Hassan asserts Yes voters don’t speak for Scotland. I have news for him – they  damn well do. Full democracy is for everybody, No voters and non-voters too.

Challenge his protean opinions and he will counter independence is not a “black or white issue”, a favourite phrase, completely meaningless, yet he says without the slightest embarrassment “Scotland can become independent or remain in the UK”, an Hassan happy to trade in black and white.

Remove the SNP from Scotland’s Parliament and you have the British status quo reinstated. Hassan appears not to understand the precariousness of Scotland’s minimal freedoms. He arrives veneered with an academic qualification and spectacles, one lens tinted blue the other red. He affects a Pecksniffian stance on Scotland’s future.

This is a man who hasn’t mastered his fears. By the standard of his ‘commentating’ his academic degree must be a Ph.D. in Posturing.

8 Responses to The Hassan Hustle