Posted on September 2, 2017 by Grouse Beater

Your weekly guide to all that’s rotten about car ownership, plus some good bits

When the Swatch Watch inventor Nicola Hayek took his design for a micro car to VW, had it rejected by VW, but persisted until Mercedes Benz took on the project, we got a funky vehicle fit for our cities. Like the Mini before it, it was a small revolution.

Three of them could fit on a single parking bay, side-by-side. There was more passenger room than most SUVs. It offered excellent mpg. The body didn’t rust, it was plastic, panels you can lift off if damaged and replace with ease. But our city fathers made no effort to accommodate the hamster on wheels, and the mounting number of pot holes put off buyers from bouncing around, pitched and tossed.

Preferring supercars costing over £100,000 right-wing automobile magazines laughed at it – they are still laughing. Mind you, the latest iteration is plug-ugly, that perfect original shape ditched in preference for something that looks as if a BMW Mini melted in the sun.

Then Mercedes stopped making the great little Smart sports car and brought out a four-seat version of the two-seat wonder, Smart ForTwo, just when you thought they were nurturing a sub-brand where all models had two seats. Today they announce, correctly in my view, the Smart brand will be all-electric in a few years, but first here’s a starter.

Mercedes name the concept Smart Vision EQ Fortwo. But it has a downside. So far, it’s only a self-drive version – obvious by the lack of a steering wheel. While I am a devotee of electric car development I don’t like the idea of a vehicle driving itself anywhere. If they invented a bed that made itself up every morning I’d be happier.

The centrepiece of the new concept car is an advanced Level 5 autonomous driving system. This is where it gets silly. You can summon it using your iPhone.

“In the future, car-sharing users will not have to look for the next available car – it will find them and collect passengers directly from their chosen location,” aye, right. And I suppose it will open and shut the garage door, or if parked in the street and blocked in, move the offending vehicle out of the way.

Unfortunately Smart considers the adoption of autonomous driving technology in the development of its Car2Go scheme a key component in its growth plans. These days a Smart model is hired every 1.4sec in cities around the world through a customer base of more than 2.6 million. The company says internal studies predict the number of users of car-sharing schemes worldwide will increase fivefold by 2025 to more than 36.7 million customers. I’m surprised. Currently buyers choose the cheeky Fiat 500 before a Smart.

Hinting at plans by Smart to take its line-up exclusively electric in the future under Mercedes-Benz’s EQ electric sub-brand, the Vision EQ Fortwo features a rear-mounted electric motor and 30kWh lithium-ion battery offering a range of “well over 300km”.

This Smart doesn’t make the error of the first, too wide opening doors

Conceived around a pod-like safety cell that provides clues to how Smart plans to evolve the high-strength steel Tridion structure used by all of its models since the company’s inception in 1998, the Vision EQ concept features a one-and-a-half-box exterior design that is expected to influence the styling of the next generation of Smart models. The overall appearance is more rounded than existing Smart models, the dominating features being its heavily curved roofline, large wheel houses and ovoid-shaped doors.

This Smart solves the door problem of the last Smart on a car that is supposed to be space saving. The doors open scissor fashion. The two round electrically operated doors pivot backwards parallel to the sides of the car over the rear wheels, revealing a large aperture through which to climb aboard into the flat-floored cabin. No more swatting that passing cyclist off his wheels squeezing by on the inside.

To give the micro car maximum stability it continues the design of previous Fortwo models by placing 18in wheels at each corner, providing it with the largest possible footprint in a move aimed at maximising interior accommodation. At 2699mm in length, 1720mm in width and 1535mm in height, the new concept car is the same length but 50mm wider and 25mm lower than today’s third-generation Fortwo. 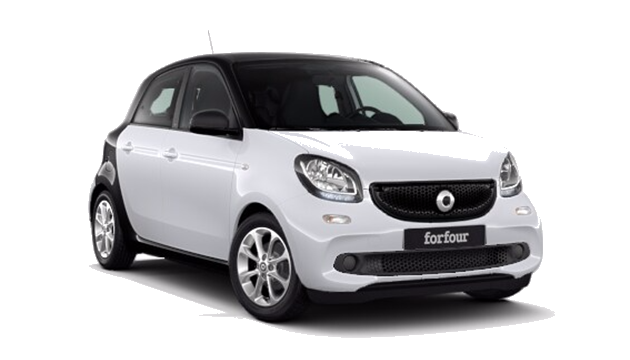 The current ugly as sin shape – German aesthetics at their worst

There are some new electronic goodies to enjoy. A graphic within the headlights mimics the blinking of an eye when passengers approach, while the grille can display messages to prospective car-sharing customers.

As with today’s Fortwo, the new concept car receives a defined bonnet with the front end structure used as a deformation zone for added safety. The rear end receives a deep, two-piece glass tailgate and high-set LED tail-lights that are designed to carry either a conventional look or provide information on traffic jams or possible delays.

Inside, the self-driving Vision EQ Fortwo features a minimalistic cabin without a steering wheel, pedals or traditional controls. Functions are controlled via smartphone or voice control. With space for two, occupants sit on a lounge style seat featuring a retractable centre armrest. If they keep the seat design it’ll be a first – seats you can actually clean under with a hoover, and even retrieve that pen of pound coin by hand!

Inside on the dash is displayed on a 24in high-definition monitor mounted beneath the windscreen. Smart envisages the doors of the new concept to also display information, such as news, local events and weather, turning it into a mobile billboard.

Well, so far, so good. But they can keep the self-drive gimmick, unless it can go to the shops, get my week’s food, or drive me home after a good night at the pub with pals.