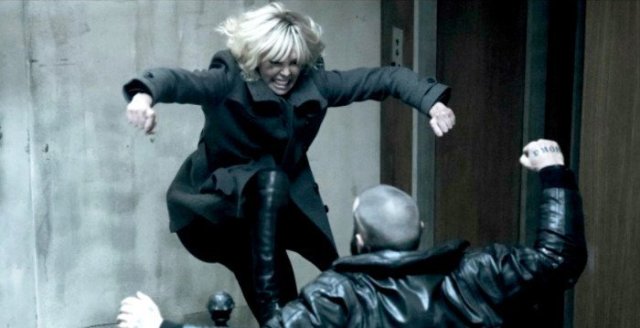 If readers want to avoid reading this review here it is on a postcard: Atomic Blonde is another Hollywood boilerplate story about 100 different ways to kill a man, and one way to kill a woman. What brains it has are splattered on walls after a gunshot to the skull.

Dumb Hollywood studio bosses are at it again; get one killer superwoman out there and at least two other studios must have their version, Scarlett Johansson eat yer heart out. And I have no idea why women want equality of opportunity in films yet when in the position to dictate choose to be as stupid as men in their choice of roles.

In the pre-premier hype for this flash, bang, wallop of a kick-ass, thick chick flick, the star Charlize Theron mentions almost casually the loss of two teeth. So much for well-prepared stunt fights. The consummate lead of Monster, (2003) and Mad Max – Fury Road, (2015) is one serious and always interesting actress, not to be tainted as a mere vacant eyed model for Dior perfume. (We must call it a ‘fragrance’.) The commercial is pretty dire, and ought to embarrass any serious actress, but somehow Theron gets off with it.

Oddly, she’s been seen in the company of mean-mouthed Sean Penn  lately, the actor who scolded his colleagues for not knowing whether “they are an actor or a model”. Theron began her career as a model, so I guess she can claim justification for snaffling Dior’s fat fees, and walking around in slinky gold dresses with a gait that makes her look as if thawing a packet of Birds Eye frozen peas between her thighs.

To gain a coveted star role in a film an actor often has to sign a two or three picture deal with the studio or independent (great word) producer. The actor calculates they can pick and choose given enough time and a choice of scripts, but somewhere in the studio’s in tray is a project they bought at great cost so bad no one wants to make it. Last picture in the deal on the table, sure as hell it’s the one confronting the actor with no choice but to sign on the dotted line. They hope they have enough box office muscle to chivvy the screenplay up in quality, but a dud is a dud, no matter how smart the director.

The inside gossip is Theron owns the rights to the comic strip on which this film is based. If so – and she’s credited as a producer – she needs to find a better scriptwriter. 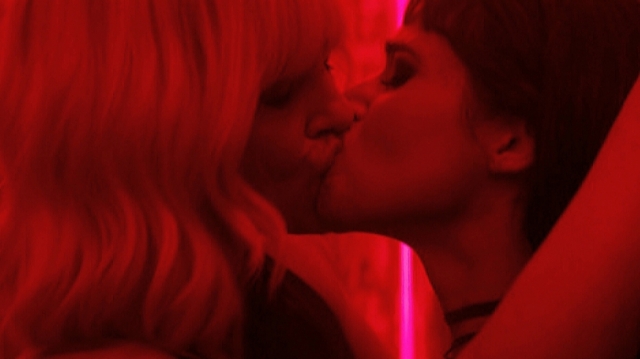 As mentioned earlier the story is pure boilerplate genre. It reminded me a lot of Mel Gibson’s revenger’s hokum Payback, (1999) shot in the same steel grey-blues, locations are low life back streets, or strip joints.

In Payback everybody who is anybody gets whacked in brutal ways, and the hero is tortured until he refuses to speak. The only reason for the hero to spill the beans is to make a false statement that leads the villains off the scent and gets them off his back. Payback’s plot sums up the plot of Atomic Blonde.

Lorraine Broughton, she the blonde heroine of the title with the forgettable name, dresses like a thirty’s movie star – the perfect disguise for a spy.

The story is told in flashbacks as Broughton (Charlize Theron) recounts her escapades to her unsympathetic MI6 senior bosses, a third man watching behind the one-way glass. Officially, this brutish ‘thriller’ –  there is no tension – takes place in Berlin just before and after the toppling of the Wall, in early November 1989.

We begin with that old faker President Reagan demanding of President Gorbachev that he should “take down this wall”, a blatant steal, since a week earlier Gorbachev is recorded in reality confiding in Reagan he was about to do that anyway as part of his plans for Perestroika. But the film doesn’t stretch to political insight.

We cut to Broughton emerging out of a bath of ice, her body beaten, bashed and bruised. From then on its all flashback moments and a lot of close ups of ice, ice on ice, ice in ice buckets, ice on roofs, ice in vodka glasses. Oh, and almost everybody smokes. It’s the only way they can express intensity.

We learn Broughton was sent to Berlin to eradicate an espionage ring – they are all psychopathic killers – get hold of a list of names, and on the journey discover who is the double agent that is a pain in the files of our goody two shoes intelligence chaps. We pretty well know who that is from the start because the character is the most sleazy one on the screen. He even wakes up with two women beside him in bed and doesn’t know how they got there. In among all this silliness there’s a watch shop staffed by a creepy chronologist. And there’s an evil black Porsche 911 Turbo. All spies in disguise must have a flashy standout sportscar.

David Leitch’s film, based on Antony Johnston and Sam Hart’s graphic novel The Coldest City, does have a composer credited, yet it lurches from one pop song to the next, only one in my view reasonably well choreographed to the action. George Michael’s “Father Figure” nicely punctuates – or is that punctures – half-a-dozen polizei beaten to a pulp by Broughton our stiletto-stabbing MI6 agent.

Our  peroxided fag puffing superspy spends the occasional night with another glamorous spy, Delphine (Sofia Boutella), a smouldering French intelligence officer. Broughton is femme in the sheets but she’s a riveter in the streets. In fact, that scene had me confused. Didn’t we see her in bed with a male spy at the start of the story? She must be fashionably AC-DC. Ah well, a hard working spy has to take sex when they can get it.

The most coherent moments of this byzantine groin crusher is the seamless fight scenes, (but really cleverly edited) episodes that show off the aloof appeal of Theron. She lays waste to Stasi agents and Russian grizzlies with a zeal that would shame an abattoir worker with a fifty a day killing brief. 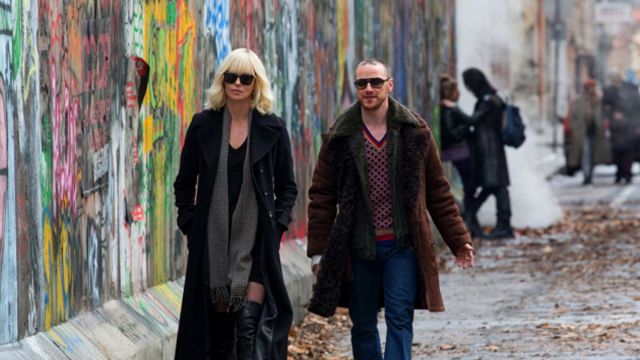 How many action flicks have we seen where bodies litter the street, back alleys, corridors, and stairwells, broken glass all over the floor, yet when characters return to the scene of death and destruction next day there’s not a body to be found? Who is cleaning up the place, Winston Wolf for Direct Line?

There’s never a policeman around when you need one, and should one blunder into a scene of carnage by mistake he’s the dimmest in the force and loses his gun, his police car, his dog, and his wife, to the hero in a nanosecond.

Real spies don’t do extended karate sequences, back flips up walls, or dare devil car chases shooting backwards while driving at high speed forward, or shooting through the windscreen while driving backwards at high speed. Life for them is low-key and drab. They dress like a lowly bank clerk and stick a poisoned tipped umbrella into their victims thigh while waiting at a bus stop, or invite him to Fortnum and Masons for a refreshing cuppa of Ceylon’s best Plutonium Tips.

If you like the pornography of violence butch and bloody, this is your film.

6 Responses to Atomic Blonde – a review