Giant pig and unlikely friend in Okja, a Netflix blockbuster

This review won’t be easy to write. I attended a birthday party recently for which a large suckling pig had been slaughtered and roasted for the many guests. It was a sad sight.

What is the film about? Well, though there are two wonderfully original films about a normal but hyper intelligent pig called ‘Babe‘, this might be difficult to accept as a follow-up subject for a film – it’s about a giant, oversized pig. A really, really big pig.

That’s not altogether true, the pig is a hybrid, part hippopotamus.

The last film of Korean director Bong Jung-Ho’s that left an indelible mark on the imagination was his monster movie, Host, a ludicrous plot on paper but a terrifically enjoyable story on film. This has to be described in similar vein, part monster, part horror, part science fiction. Like Host, a story that had a strong thread of anti-imperialist sentiment in it, (symbolism I missed first time around) Okja contains a great deal of satire, a lot staring you in the face, some veiled, and some too Korean to be useful to western sensibilities.

Okja is one of those film titles you gloss over when checking cinema movie schedules. What does it mean? A child’s cartoon? A marshall arts film from Hong Kong? The story of a prize winning race horse? A fantasy? Gloss over it I did when it appeared at the Cannes Film Festival, until I heard it had been booed by audience and critics. Then I took notice.

A quick phone call discovered the audience like the film a lot; they got shirty when the Netflix logo appeared on screen in the pre-title sequence. Within the industry there’s a groundswell of resistance to Netflix’s foray into movie making essentially designed for the small screen and swift online transmission. Netflix appears to have oodles of money to throw at projects – $50 million USD for Okja and its special effects. The company doesn’t need to rely on film competitions to generate publicity. Some people felt the to-TV project ought not to have been chosen for such a prestigious competition.

Now released in selected UK cinemas, Bong Joon-ho’s Okja is garnering five star reviews.  For a Korean film, that’s very good news. For Netflix it’s the sound of money in tills. For my part I try to avoid other critiques until my own is written, but now and then use one as a whipping post, a review I think well off the mark. That won’t work this time because so far reviews are universally excellent. In this instance it’s safe to say the film is good, but I take issue with five star ratings. 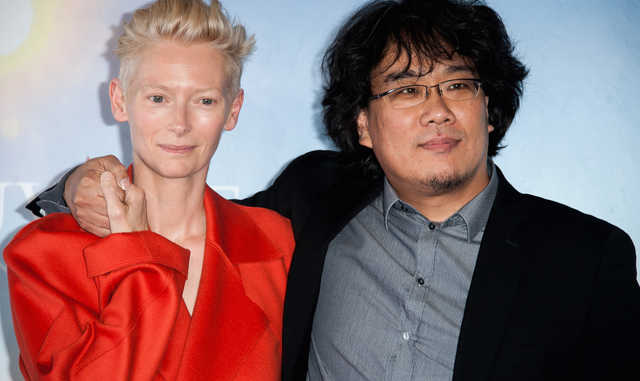 A reason for me, personally, to give a film a miss is Tilda Swinton. I readily admit she’s an excellent actor, but she’s not the kind that has me certain of a moving cinematic experience. Her screen persona is ice cold, her looks boyish to the point of androgynous. I’m usually impressed by Swinton’s technical performance, never moved by it.

She makes a good villain. And indeed, that the sort of character she tends to be cast as, that or the harassed mother. In this case she’s the arch villain in the Cruella de Ville mold, but because she’s such a very clever, dedicated actor, she offers us a three dimensional personality. Indeed, she offers us two well-hones roles as sister. Jake Gyllenhaal, her co-star, doesn’t do so well, but more of him later.

The plot is basically one of the unaccountable conglomerate against the man in the street. The institution scheming to make maximum profits, and skewer animal rights at the same time, is the fictitious Mirando Corporation, a multi-national agro-chemical conglomerate. The CEO in charge is none other than Lucy Mirando, (Tilda Swinton) playing a character more narcissistic than Grayson Perry, and in more garish frocks, if that’s possible. (She also plays her sister, Nancy.)

She displays to the world Okja as a super-pig discovered in darkest Chile, clearly one that managed to evade the killer squads of Allende despite its humungous size. The film begins with a bravura musical video made by the Mirando company. Lucy explains to her workers the pigs are made for the modern age: they are human friendly, they have a small environmental footprint, they don’t eat much, (really?) or poo much, and are destined to be a fabulous revolution in livestock. But best of all – they taste just great!

She announces an international contest to which farmers can have a piglet each to raise the finest super-pig. The winner will be the farmer who fulfils a number of strict criteria. The most important, the key criterion for selection, the winning factor will be that the pig, “needs to taste fucking good.”

From then the chase is on to save Okja from the slaughterhouse.

So, there you have it. Mirando Corporation will bring home the bacon. No sooner has the public ordered theirs crispy than up jumps our wee heroine, little orphan Mija, (Seo-Hyan-Ahn) to save the giant pig from the slicer.

That too isn’t altogether accurate. Mija has been looking after the pig for ten years in the high mountains; they are best friends. Their world is turned upside down when Miranda takes Okja to New York on a publicity gig. That scenario we’ve seen a hundred times before, the hick from the sticks in the metropolis, or King Kong taken to New York. Why New York? It’s full of Jewish people who don’t eat pork. Well, New York is where the super-pigs are to be judged before the world’s media, except maybe Israel.

But plucky wee Mija is determined to rescue her porcine pet and get him home again. To add potatoes to the pork broth the Animal Liberation Front, (AFL) are also out to rescue the pachyderm-sized pig. The AFL is an environmental gorilla group, its leader the sartorially  fashionable and exceedingly well mannered Jay. Jay is one  glorious creation. He’s played magnificently by Paul Dano as the most ultra-sensitive, revolutionary leader since Che Guevara in his quiet reflective moments.

As the rescue melee conflate into a morass of strange bedfellows doing battle with Miranda the mega-corporation, the story takes a handbrake turn from adorable family action fable to vegetarian call to arms, lets do clowning stuff, let’s make it a comedic free-for-all. That’s when it falls apart.

Two things lift this film out of the ordinary. For about sixty per cent of its length it’s a whopping good movie, fast-paced, original in conception, utterly absorbing. But the second half  deteriorates into old jokes, rehashed car chases, over-the-top acting, and silliness. Bong just lets go of direction and everybody takes their cue and goes bonkers. Look out for projectile excreta, yes, even that.

There are a few inspired moments. Going by Bong’s Host, you can expect more than mere exhilarating cinematography and plausible special effects. One scene in particular offers us a glimpse at Bong’s thinking. The director goes so far as to recreate Barak Obama’s war room photo, the one of the White House during the Bin Laden illegal assassination raid. The whole film seems to be about how the United States and its corporate allies project power across the world.

The political message I think Bong is identifying here concerns US imperialism’s way of making itself look benign, on our side, but the opposite is true. It’s a malignant force. To be honest, Okja’s politics are all over the place, his centre of focus wobbly, the human story cloying.

However, if you think that opinion a load of bull, not to say, pig, and you’re not inclined to look for meaning in a film, well, there’s lots to enjoy at face value. What might rankle are those performances that descend into clowning. One crude dude is Jake Gyllenhaal as a Mirando-sponsored TV personality. He adopts a high-pitched squeal of delivery, staggering about as if Captain Jack Sparrow. Why Bong let him to do that is a mystery.

You could say this film is subversive, or you could say it’s half-good and half-infantile. And yet it still grabs you, rather like the audience seeing ‘Springtime With Hitler’ for the first time in The Producers, mouth open, stunned at what they see and hear. You either guffaw or  surrender to it. I just wish it had been all good.

As far as Bong is concerned, it is all good, “If you want to make something strange Netflix is a good place to go.”

4 Responses to Okja – a review