When the Proclaimers manager phoned asking if I’d shoot their first promotional video I refused. “I don’t do pop videos.”

Back in the day, pop videos were made by frustrated drama directors, people from art school who could barely draw, or photography graduates with an eye for composition and no ear for dialogue. You can add a lot of television commercial makers to that list, people unable to sustain a steady camera shot long enough to convey human emotion.

For my part, I felt master of my destiny. I had a six-part international drama series under my belt, a major political thriller in award competition, two documentaries made, four screenplays in development, and a tourist board documentary about Carrickfergus Castle in the can. Life seemed set on its course. Who needed pop videos?

A few days later a jovial, slightly unkempt, manager arrived at my office door. In a pleasant accent, interrupted by wheezing and coughing, he introduced himself as the Proclaimer’s manager and placed a demo-tape on my desk.

We chatted awhile, he enthusing about his discoveries. I agreed to listen to the tape, and went back to the day’s priorities.

A week later I listened to the tape. The impact was immediate. The sound that came out the stereo speakers was untutored, raw, and authentic.

I lifted the receiver, dialled, and told their manager I’d like to meet the Proclaimers

Two tall, slim, geeky lads entered my office, identical twins. Four shuffling feet followed by two pairs of matching spectacles perched on four ears and two snub noses. I checked for a mole or a facial blemish so I could tell them apart. They made an odd sight, Charlie and Craig Reid. Their manager introduced them. Two short-sighted, scrubbed faces with toothy smiles found a seat each.

I looked them over. Singers? They’re kidding me. The manager broke the ice.

“You’re the best guy for the job.” He pumped my hand vigorously cupped in his. I wasn’t so sure, but I knew I wanted to be associated with them. I opened the conversation.

I addressed Charlie and Craig but their manager answered for them.

Charlie cut him dead. Of the twins Charlie did most of the talking, with Craig doing most of the nodding in agreement.

“Aye, political. Wurr Scots celebratin’ bein’ Scots, an’ the land we live in. It’s about forced immigration. That’s the key tae it.”

“Political doesn’t scare me,” I said. “But I don’t know how English ears will take to the uncompromising accents. Still, the melody and the rhythm are, well, infectious. It can’t fail. I’ll take on the project.”

In unison, huge grins broke open Charlie and Craig’s normally deadpan expression. Their manager got up and shook my hand as men do when they like each other.

Trust was sealed over cups of percolated coffee and some Kit Kats. 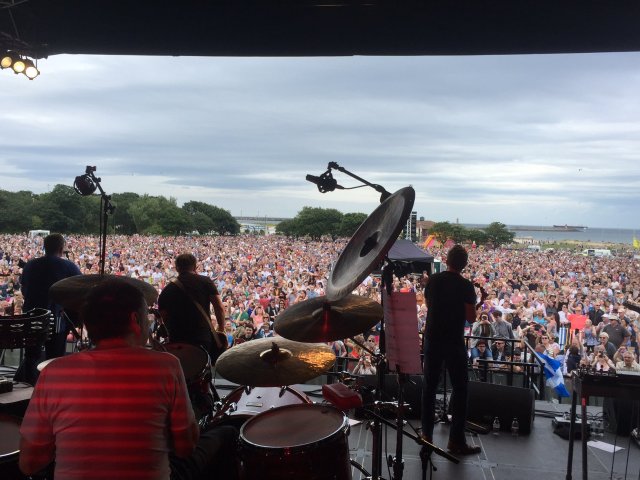 After they left I set to thinking how in hell to make a pop video. For a start their London label was overly cautious. “We’ve £20,000 for the lot, crew, locations, including editing. Editing must be in London. Take it or leave it.”

I knew they were deliberately holding back on money. A normal video back then had double that to spend. Worse, editing in London meant unwanted London prices, rail journeys, and overnight stays. It was work lost to Scottish editing suites.

The politics of London money men keeping Scots penny-pinching was alive and well. A financing producer has the right to demand additional edits, which, as it transpired, was exactly what they did do. When it happens, a mean fee gets sacrificed on the altar of whimsical change. Executives love to interfere; too many cooks, and all that. I calculated my fee at £2,000, if I was lucky. Not much for two month’s work.

The first decision to make was where to film the video. The lyrics cover places and towns devastated by the Highland Clearances, and Margaret Thatcher’s callous erasure of Scotland’s heavy industries. Lewis, Skye and Sutherland obviously referred to the Clearances, while Bathgate, Linwood, Irvine, and Methil were all part of the destruction of Scotland’s factory and steelworks economy. Actually to film even a few seconds in those places was out of the question on a mean budget. Whatever location we decided upon had to be in keeping with Charlie and Craig’s earthy appeal.

I have no idea what tutors teach film students, but I know what they do not teach them. Film students lack grounding in basic aesthetics. Moreover, they find it difficult to collaborate. They think ‘director’ means dictator. They have basic technique, a lot of arrogance, and a barrow load of college clichés.

I’ve spent almost all of my professional life giving a leg-up to new talent, and, though I wanted to direct the piece myself, I handed it to a fledgling graduate from film studies. I felt he would be a creative collaborator not a kudos thief, and so it proved. I do not know why I was so sentimental, but there it is. He ended up working for BBC Scotland. Amen.

The archetypical Proclaimer pose against a Leith backdrop

I had to ‘cheat’ locations somewhere in Edinburgh. In the end, knowing Charlie and Craig were born in Leith, I chose a disused warehouse on the dock front. The Queen’s Park, Arthur’s Seat, in Edinburgh’s city centre would give an impression of treeless Highlands.

An empty Victorian warehouse in Leith docks chosen to represent decaying industry was a rickety affair, dark, damp, and smelly. We decided not to use any of the top floors when one crew member put a foot through the rotten timbers and disappeared to his waist level. I ordered crew and extras downstairs to the concrete floor at street level.

I settled on a leit motif intercut with the Proclaimers singing and playing guitar – a dance around a child adorned by Scotland’s Saltire flag.

Being the very model of an aspiring Hollywood producer I exercised my prerogative to cast by blatant nepotism. I put my cute little daughter in the scene. She screamed her head off and had to be replaced by the daughter of Run Rig’s lead singer, Donnie Munro, who took to her role as Meryl Streep takes to a new accent, with perfection.

Crew were assembled, smoke guns primed to add swirling mist and haar to the indoor scenes of dispossessed people. Warehouse scenes shot, we dragged a chuck wagon to the extinct volcano in the middle of Edinburgh we call Arthur’s Seat to film Charlie and Craig singing and playing guitar ‘in the Highlands’.

All sequences were shot on schedule and on budget. That was a good day.

It was hard to believe this was Charlie and Craig’s first recorded film event. They conducted themselves like seasoned professionals, eager to try new ideas. They had a good sense of humour too when tempers grew short. “No anither take? Wurr doin’ this fir nuthin’, yi know.”

What I recall most of all was their insistence on where they stood one with the other. It had to be the same way, all angles. Beyond that they didn’t say much, but they sang their hearts out, and that’s all we asked of them.

Video ‘in the can’ I trotted off to London proud and pleased. The record company bosses rejected it on the spot – collapse of stout filmmaker.

“There’s far too much historical verbiage,” said a track-suited executive, his head adorned like a saint by a large gold LP framed on the wall behind him. “Give us more of the twins, for Christ’s sake!”

They were right. We had been so intent on illustrating the Proclaimer’s lyrics – sticking it to England about Scotland’s history and doing it with English money – that we had forgotten what it was the fans would want to see – Charlie and Craig.

Back in Edinburgh I sacrificed the measly administration fee and my own fee to pay for the reshoot. My company and I didn’t make a penny out of the project. The reshoot took another three days to complete, and three more to edit old out, and new in. After one more tweak, the London boys accepted the work, and the project was signed off.

The song reached Number Two in the BBC top 100 chart.

Looking back to those Leith locations instructs how much of an historical record that short video has become. Leith docks are almost unrecognisable now, altered to apartments, and swanky restaurants. Leithers should put up a plaque: “The Proclaimers ‘Letter from America’ Made Here.”

On the internet is a gossip site that has the Proclaimers categorised a “One hit Wonder” – I can’t remember the name of the idiots. And if readers can bothered to check the Proclaimers Wikipedia entry you’ll see them described, hilariously and in good colonial fashion, as twins who “sing in a Scottish accent“. [My emphasis]

Video: One still shot exists of the girl asleep on a Saltire flag

I warned Charlie and Craig the London boys would not allow a Scottish production company to make a second video. I hated to sound portentous but I had experience of the London mob shutting off Scottish productions. Their manager dismissed my cynicism. “You did us proud. We’ll be back.” But I was right, or at least, I didn’t see another one arrive at my office door.

As for me – I see Charlie and Craig in Edinburgh now and then from across a street doing humdrum stuff like the rest of us, shopping bags in hand, in between gigs. They wouldn’t recognise me, probably barely recall me, but there’s no mistaking them. They went on to play to packed houses. They are a phenomenon.

I watch them pass by, proud of my modest but significant part in their early career.

Some years later I found myself in a darkened cinema auditorium in 2nd Street, Santa Monica, to see Benny and June, a film that introduced us to a young Johnny Depp. The screen opened to a locomotive and carriages crossing a wooden bridge followed by the unmistakeable accents of the Scottish twins:

Disoriented, I looked behind to see if I was in Edinburgh or in Los Angeles. Amazing. The Proclaimers had made it to America. Good on them! Would they send me a letter?

A curious thing: they are the only two staunch outspoken supporters I can think of never abused or denigrated by British nationalists for hoping Scotland regains self-governance. I wonder what their secret is.

I take my hat off to them. Anybody who can put ‘Methil’ in a song’s lyrics gets my vote.

A version of this essay was published in iScot magazine in May 2017.

6 Responses to Promoting the Proclaimers