Readers hoping for gossip will be disappointed. I’m about to describe the events that took place before and after meeting our admired First Minister, Nicola Sturgeon, (for the second time) but for those not yet had that pleasure I’ll convey what many have perceived of her. She’s in control and absolutely focussed. She exudes authority.

The occasion was the opening of Dunoon’s refurbished Burgh Hall, a hefty red sandstone Victorian pile once for demolition, now saved as an arts and entertainment centre.

The Grade B Listed building built in 1874 is imposing. It sits high in the town’s centre, overlooking the harbour where the flat bottomed ferries forever chug back and forth from Gourock piloted by men who’ve held the same job most of their working lives.

The English weather forecaster on the radio pronounced it “Gow-Rock.” A day trip down the Clyde on a paddle steamer – Glass-gow, Gow-Rock, Done-noon, “Doon the watter”.

Dunoon, the Riviera of Scotland, punctuated with unkempt palm trees, has seen better times, and many a Labour and Tory government that didn’t give a damn. The centre offers shops that look as if they’ve not changed their window display since the 1950s. The shoreline is lined with the aging holiday houses of Glasgow’s 19th century wealthy, a boat ride away from the sheeple and hoi polloi of outside toilet tenement dwellers.

Dunoon Burgh Hall today, spruced up, cleaned, and ready to serve the town

A great asset to the town

The transformation has generated jobs, not only trades in the recasting of the building, but now in administration, exhibition organising, classes, catering and trades. Every room is utilised to its maximum, with a modern café added onto the rear. There’s a room to create paintings, one to make and fire pottery, another to exhibit anything from children’s school drawings to great art, the obligatory gift shop, and a vast main hall on the second floor where plays can be performed, dances organised, or wedding’s held.

I and others were invited to the official opening to see some unusual prints of Andy Warhol, gifted to Scotland’s Museum of Modern Art. Warhol finally made it to Dunoon. There was also prints loaned for the occasion by Royal Academician painter and master printmaker Barbara Rae a Crieff lassie who’s made big in the world of contemporary art, and to whom I am married.

Once I pinned my name badge onto my shirt pocket I did what we all do, check were the free food and wine lay, (there was no wine or beer!) and searched the crowd for familiar faces. Amid the excited staff I recognised only three. John McAslan the principal architect, a Dunoon man, flying around rooms checking last minute detail, trailing the architect’s statutory denim jacket behind him. The head of Creative Scotland, Janet Archer, milled around, severe, stolid, dyed cropped hair, every inch Rosa Klebb of the KGB. Nearby the lanky patrician figure of Sir John Leighton, director general of our national galleries, a supporter of Scottish art unlike his predecessor.

I waited for the Big Moment in the café chomping on a cube of jam sponge, no reward for a long drive from Edinburgh. I got pinned there by a garrulous oldie who insisted on telling me about all her famous friends, and when my eyes glazed over, proceeded to continue the history of her above-average achievers to an unwary anthropology student next to me.

The Big Moment was Nicola there to open the building, and let people know where some of the funds had come from, and that their elected government knew where Dunoon was unlike Westminster politicians. I expected her to arrive in a phalanx of black limousines, Saltire flying on the radiator cap, police motorbikes on either side, sirens blaring. The only police presence was pleasant beat cops in ill-fitting uniforms who looked as if given a day’s release from a Broons cartoon.

Nicola arrived in a non-descript saloon – it might as well have been a bus – perfectly in keeping with her down-to-earth approach to her day job, which is the considerable task of retrieving Scotland’s sovereignty from the clutches of a belligerent neighbour.

After running the gauntlet of press cameramen, Nicola was greeted by the assembled staff, and guided to a series of meet the public moments, each set in a different room where she got involved in the activity that took place. I notice that contrary to the strict written schedule I was given she broke it at every opportunity, taking her time to meet and talk to whomsoever she wanted to meet. There was not a sign of Mayisms – two minute photo-op chats and whisked off to a place of safety from the public. 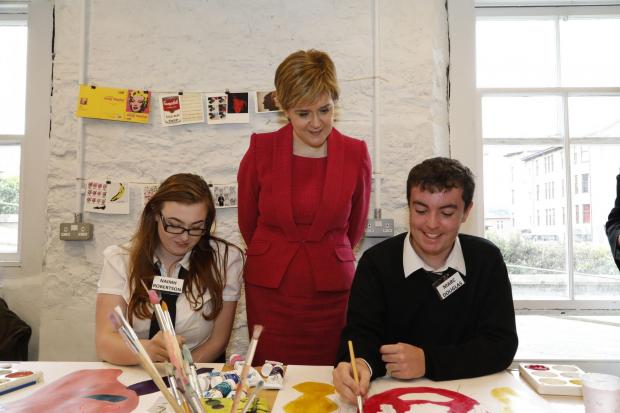 Nicola meeting school students at painting. I’m behind the camera

Nicola’s ability to concentrate on the person talking to her amid a cacophony of chatter, pushing and shoving, and clicking cameras, impressed except when she met my wife and eye. For ten minutes of a three-way conversation Nicola refused to look at me. It was so uncomfortable I stepped aside to get out of her eyeline and let her talk to my wife. Later, upstairs, in the vast hall big enough to shoot ducks, she was given a warm reception by speakers and a musical assembly group.

A frazzled organiser grabbed me by the elbow to ask if I’d like included in the group photo shot of the day. Pathologically shy of cameras I made my second excuse of the hour and snuck into the gift shop.

Nicola Sturgeon is a politician in the history books. I’m master of the missed opportunity.

After an hour of meeting and talking to VIPs and staff, Nicola drifted outside to be greeted by people in street who burst into spontaneous applause. Cameras clicked and faces beamed. About to get into her nondescript limousine, she noticed an elderly man behind some railings waving to her. She joined him in conversation. I wondered if it was only me she disliked, for he to was male. In my mind I compared the low-key, relaxed scene I was witnessing with Ruth Davidson’s idea of meeting the public, a politician who sits on the back of a buffalo demonstrating to Scots how Vietnamese farmers reach their their paddy fields and we should do the same.

Three times Nicola tried to reach her car only to be surrounded by young and old. A group of young girls waving iPhones begging for a selfie. I noticed a selfie was never refused. She obliged, and then, invited into the local SNP shop, went inside to chat to the staff.

As I waited for my wife, next to me on the bench outside the new gallery sat a middle-years man and woman, between them a beautiful child, a girl not yet three years of age. He was Scots, the woman English, the child a painting fit for a portrait on a Dresden porcelain vase. I broke the ice and spoke to the child with the shining blue eyes and naturally curly hair.

“Hello, perfectly formed person. How are you?” She looked at me, the man with the grizzled face and designer stubble, and then up at her father for reassurance I wasn’t a mad man from the wilds of Alaska.

“What’s going on?” asked the father, nodding in the direction of the crowds. “Nicola Sturgeon is here,” I said. His face darkened. The woman beside him shifted uncomfortably.

“That’s our excuse to get the hell out of here”, she chuckled nervously. The man let out the hiss of an expletive. “Fuck! No’ her?”

“Has she done you some harm?” I chose words I hoped might throw him.

He checked me out for a few seconds. “You’re no’ from here?” he said with a tone half-question and half-scorn. “Edinburgh” I answered, half-apologetic, the city that voted No.

Can their revulsion have something to do with a Scots accent? Is it The Cringe, that terrible affliction inculcated in so many who live in a colonised country? In that case do they prefer a lump of limestone lead them with no ability to think on her feet, a Theresa May type?

The man with the young daughter spoke up. “We got together to save the building”, he said, letting me know Dunoon had people power. “A fine thing to have accomplished,” I said, and meant it. “SNP have a policy of getting power and decision making back to us.”

He stopped his little daughter from moving out of his grasp and launched into a rant.

“They wasted five million on a fancy pier and naebody’s used it since.” The woman nodded in agreement. “Useless”.

“And ‘they’ are who exactly?” I got no answer only a scowl.

It dawned on me he was talking about the pier, the ferry terminal, a project that employed local tradesmen over a few years and spread its budget among the community. I’m told it was a Tory council who commissioned it. The father didn’t explain why the pier was ‘useless’ – I asked what sort of ferry was needed and got no reply – but it was clear he thought his taxes had gone to waste. I’m sure he felt there were more deserving priorities. Anyhow, he wasn’t in the mood to exchange political pleasantaries, and beckoned to the woman I thought his wife, but wasn’t, that it was time to go.

As he stood up from the slatted steel bench I gave him a parting farewell. “I’m for the same rights, the same opportunities, the same control of what we earn, as those folk south of the border. I take it you wouldn’t want less than that for your country?” He gave me a half-smile in return. It was then I noticed his Ranger’s blue football strip. 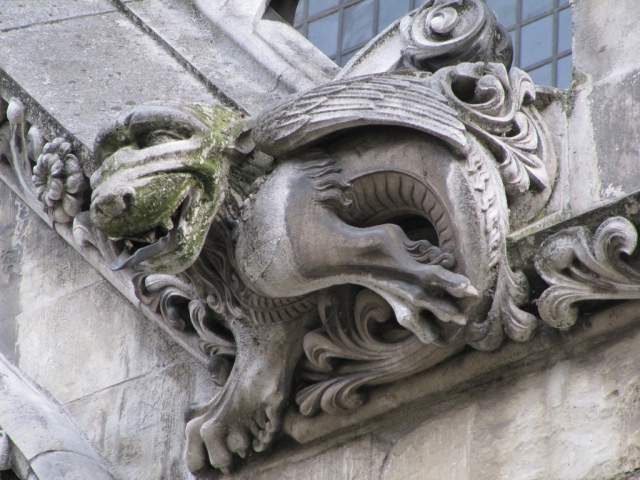 The grotesque on the wall

On the side of the Burgh Hall there hangs a Grotesque, not a gargoyle, not the stone face that takes water off a roof, but a carving to ward off evil spirits. Maybe it did its work that day, or maybe the propensity that lurks in the hearts of some Scots to cheat themselves of their birthright will need more than a talisman against self-harm.

When I left, Nicola Sturgeon was still in conversation with an increasing number of onlookers and admirers. Whatever schedule she had she’d junked.

I got back into my black SUV often mistaken for a taxi by late night revellers, and headed to the ferry, back to the M8, more convinced than ever that the saviours of Scotland and its communities will only ever be the Scots themselves, even the permanent misanthropes committed to nothing but themselves.

The trick is not to let them surrender, dragging us back to last century. They have to understand we share common ground. There’s no going back.

And we bloody mean it!