Hats off to Brian Cox – his Churchill does the business

Film fans will know this is the third British war time drama this year. The previous English set drama being the disappointing Their Finest. No wonder so many Scots are paranoid. (Scotland got a truly mirthless remake of Whisky Galore.) Every time there’s an election or a referendum the media splurge on the ‘Great British Everything’, Britain’s glorious wartime history uppermost in their propaganda arsenal.

It will sound unkind, especially because I’ve met Brian Cox and took an immediate liking to him, but in some roles he can be truly hammy. Scots actors get so little exposure to film camera work that they have a tendency to bring their theatre techniques to it, the larger than life gesture or big expression for the benefit of the people in the rear seats. They over-project rather than internalise. But Cox is always watchable.

In support roles Cox always excels, one only has to recall his broken father to Dennis Quaid’s  baseball player in the The Rookie. In Churchill he carries the central figure of the great statesman for the whole film. He’s by far the best thing in this thin, dubious story.

I’ve lost count of how many actors played the cigar chomping nemesis of the Nazis. Some, such as Robert Hardy, made it a life’s career playing the role in radio, television dramas and voice-over documentaries when not playing a grumpy vet on television. Other than Sir Anthony Hopkins, I doubt many can claim to have played the range of famous men Cox has tackled. He’s taken on J. Edgar Hoover, Trotsky, and Stalin, among others and excelled in every one. And before going further, I should add, Winston Churchil represented Dundee for fourteen years, from 1908-1922, a nice coincidence

What does the cinemagoer do when it dawns that what unfolds before them is clunky, emotionally false, and factually bogus? Churchill is so full of movie clichés and silly melodrama you can’t stop yourself sniggering, and then giggling, and then guffawing.

On particular scene tells you immediately that you’re in for a whole lot of cinematic tosh. Summer, 1944 – Churchill is in a flap. He’s determined to stop the Allies’ June D-Day invasion of Normandy. Yes, stop it.

Standing on an English beach in the opening scene he envisages the sea foam turning red, just as the seas are said to have run red with the blood of soldiers during the disastrous Battle of Gallipoli, a World War I campaign that Churchill championed and that led to some 40,000 Allied deaths.

I can hear the director, “I got this great visual idea – he’s walking a beach, the water turns red, and we cut to Churchill’s face full of horror!” Very original. Why not in his bath? 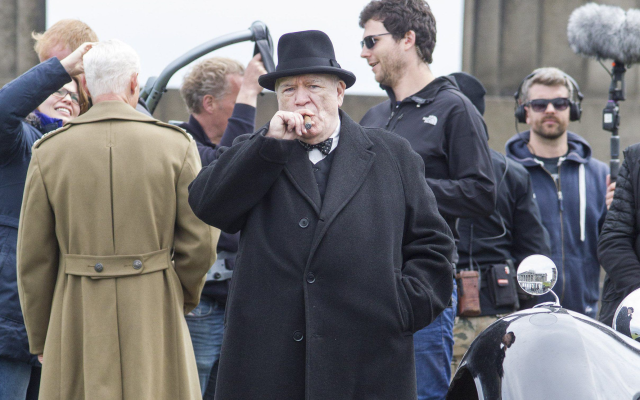 This Churchill is hyper-careful of his reputation, determined not to make the same blunder twice. He scoffs when presented with D-Day plans – Operation Overlord – by General Dwight D. Eisenhower, (an unbelievable John Slattery) and England’s Field Marshal Bernard Montgomery, (an okay Julian Wadham). Churchill flaps about like a wounded bird. They’re used to Churchill’s tantrums and black moods but persist. They sigh and roll their eyes at the excitable prima donna.

Right there and then you drop any belief in the plot. A green history student will tell you the D-Day plans were months in the making of which Churchill was a part. To present us with a scene in which he’s supposed to see them for the first time three days from the actual event is insulting.

The script is by a first-time screenwriter Alex von Tunzelmann, which in itself might be excusable were he not already known for writing about his opinions on truth-juggling historical dramas. Even allowing for the cinematic editing of time, this film is one long historical howler, a blunder that should have been junked on the producer’s read of the first draft. Actors are not specialist historians, so the blame can’t be laid at their door. Despite creative liberties, Braveheart was Tolstoy in comparison, but I bet you won’t hear a British nationalist make a peep against Churchill.

The Winston we meet is at the end of his tether. A whisky-swilling drunk – true, he was often drunk – a boring pedant, and a brilliant if purple wordsmith. He is woken up on the floor of his office recovering from a bender. Knowing his moment in history has come, he begins work on a speech, drafting and redrafting, deliberating on using the word “trials” or “tribulations.” What does that add to the sum knowledge of ‘Winnie’?

The scene moves on: alarmed at the idea of a potentially disastrous amphibious assault (like Gallipoli), he orders his men to draw up plans for an Italian invasion. His staff treat the old buffer like a doddering fool, and ignore him.

This far from the Second World War I suspect new generations of youth in Britain will read of Churchill as a great speech writer and war time leader, and think not much more of him. They might come across a street named after him in their city and take no notice.

Churchill was not well liked in his day. The novelist Evelyn Waugh disliked Churchill intensely. Through a character in his trilogy The Sword of Honour, Waugh’s alter ego, Guy Crouchback calls Churchill “a professional politician, a master of sham-Augustan prose, a Zionist, an advocate of the popular front in Europe, an associate of the press-lords and of Lloyd George”.

Listening to Churchill’s famous speeches now on YouTube you’re conscious of sonorous, plodding, neo-Latinate sentences, and a capacity for the portentous.

As with all American sourced biographical films there has to be a large portion devoted to the main character’s sex life. The last biography I saw was Surviving Picasso starring Sir Anthony Hopkins. It had next to nothing on why he chose his subject matter, or what drove him as an artist, but a hellova lot about why he chose and then dumped his women. In Churchill who knew that the Prime Minister’s wife, (Miranda Richardson) felt so neglected in her marriage that, even with the invasion clock ticking, she packs her bags to leave, all huffy? (Outside Wonder Woman, are there any good roles for women in American films that are not frustrated housewives?)

Who knew Winston was so self-pitying his wife tried to slap him to his senses? Or that it took a speech by a secretary, (Ella Purnell) with a soldier fiancé to shame the clinically depressed leader into getting off his arse and doing his job?

Director Teplitsky, in black. Best dressed you will ever see Dundonian Brian Cox

And so it goes. Cox’s delivery of Churchill’s “We will fight on the beaches” D-Day speech surely ranks among the best, but impact is diminished when you  know the speech and others like it are lifted out of context for a melodrama that never rises – let’s admit it –  above television soap.

Cox looks absolutely right for the role, gets Churchill’s stentorian voice spot on, his face skin is all saggy, baggy-eyed, the cigar brandished about like a weapon, but he deserves better. The film simplifies Churchill’s character and the events around him. It makes Churchill out to be an impotent meddler at a critical time in Britain’s history. There are moments he seems the least interesting person in the room. The folks behind Churchill deserve the grief they’re sure to attract from WWII purists.

The pedestrian drama is full of mono-dimensional characters and too much explanatory dialogue that sounds like a boring history lesson: “Operation Overlord will require 200,000 vehicles, a fleet of 7,000 ships, swarms of planes, two tons of water-resistant bog rolls …” I made that last bit up, but you get the drift.

The Scottish-shot locations provide plenty of scenic backdrops, though keen-eyed cinemagoers will question why wartime London looks uncannily like Edinburgh. Lorne Balfe’s twinkly score has a touching delicacy at first becoming repetitious after a while.

In good Hollywood fashion when one studio makes a film about Britain’s greatest war hero, another studio executive without an idea in his head instructs his studio to make a film on Churchill. The other being Darkest Hour (2017), stars Gary Oldman, I think I’ll give that one a miss.

As for this one, two stars and Cox earns both of them. Nil stars for the film.

2 Responses to Churchill – a review