The Handmaiden – a review 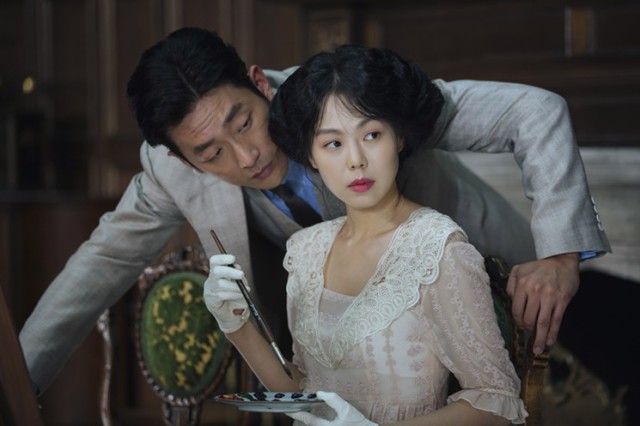 As a man I found a lot of the sex scenes cringeworthy, too long, too hackneyed. The joy of this film is in the affectionate and then loving relationship between two strong-willed and smart women, not in the bonking. We revel in their unspoken moments and their secrets. The soixante-neuf sequences are straight out of a yellowing Playboy magazine.

Handmaiden shouldn’t be confused with a much earlier film of a similar title, the 1987 The Handmaiden’s Tale, an all-Hollywood affair, an indifferent adaptation of Margaret Atwood’s speculative Utopian novel. This Handmaiden is of a wholly different order.

Though I didn’t read it, I recall the hullabaloo when the novel, set in London, was published in 2002, a gothic lesbian suspense entitled Fingersmith. Lesbianism was becoming a topic for the chattering classes, but not a subject for the commercial silver screen, and not full-blooded one-on-one love-making.

The novelist, Sarah Waters was on a crusade about the lack of normalized lesbian affairs in literature. When the 2014 year’s movie list circulated showing projects ready for production I was surprised to see director Chan-wook Park (Oldboy) was adapting the novel to his tastes – a man, and one usually obsessed with torture and violence.

What can a man add to this story? Well, he adds tremendous artistry, sensibility, suspenseful twists, and a whole skip-load of male fantasy sex scenes. Perhaps the ninety-per cent good bits is why it was nominated for Best Foreign Film at the 2017 Oscars but didn’t win because of the ten per cent wriggly bits.

Park transplants Waters’ story from Dickensian London to 1930s Korea. Park offers us a visually exquisite, dazzling, darkly comic story about two women fed up with patriarchy. For once Park ditches his signature cartoonish violence to give us restrained story telling, and just a little bit of gory violence.

Soo-kee, (Kim Tae-ri) is a brash young Korean pickpocket, a fingersmith, and resident of a “baby farm,” where orphans are taken in to learn the craft. When the Count, (Ha Jung-woo) saunters into the old house with an elaborate plan to trick the shy Japanese Lady Hideko, (the  marvellous Min-hee Kim) out of her wealth and into an insane asylum, Soo-kee’s eyes light up at the thought of a fortune. The Count, who can pass for Japanese, plants her as Hideko’s new handmaiden to help in his wooing of her.

Soo-kee is the perfect opposite of prim and proper Hideko, who’s practically a prisoner on the sprawling estate of the uncle, (Cho Jin-woong) she’s supposed to marry. If you accept the patriarchal class system you will accept she is betrothed to a rusty old gent more keen on listening to pornographic literature read, than actually getting into bed with the exotic lady at his feet.

Soo-kee dresses her mistress, fingers lingering on the silk-wrapped buttons running the length of Hideko’s spine – a fingersmith of a different kind – while the air is filled with a smoky silence and expectation. It’s all bottled passion amid a warm glow of innocence. 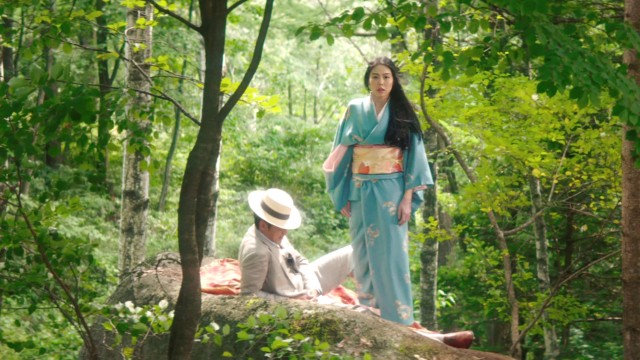 From a quick glance on Amazon you can tell the original novel has many more characters in it, but here Park gets snippy with scissors to remove extraneous characters and scenes so we are left with the most interesting core material. If only he had done the same with his over-indulgent director’s cut.

Nevertheless, he gives us many  a memorable moment: Soo-kee bathing Hideko, scattering blush-pink rose petals in the tub, fingers of steam rising from the water; Soo-kee rubbing an aching gum with her finger to soothe away the pain; Hideko, desperate to slow down the advances of her male suitor, drinking his drugged wine herself and spitting it into his mouth while they kiss; a garden sequence dappled in sunlight when repressed love is comingled with devious ambition.

As in any good suspense story, happiness must get a kick up the behind. We soon get sucked – if that is the right verb – into the ménage é trois, but from a man’s point of view, that is, the director’s.  It would be enlightening to hear a woman’s point of view, lesbian and heterosexual. That limitation, however, doesn’t stop us seeing the story’s illumination of men’s false perceptions of women and their motives.

Director Chan-wook Park on the set, probably wondering how women do it

Park allows the two main characters a sense of joy and adventure. And even with all the sex and intrigue, the dialogue is freely littered with humour – especially in a hanging scene of all things – just when the tension needs to be cut, allowing the handmaiden of the title, Tae-ri Kim time to impress with her comic ability.

Despite the many, mostly implausible, garish sex scenes, Park still manages to depict a loving relationship between two women in the middle of a gripping, snaking, humorous suspense film. I’d award it four-and-half stars had it been twenty-five minutes shorter. There’s nothing to bore us, for Park catches us just before we think a scene is too long, but it is far too self-indulgent a director’s cut to be perfectly balanced – sadly, a vain director’s ailment, the inability to leave edits on the cutting room floor.

A final observation: if you keep the analytical side of your mind working throughout the film’s two hours and 25 minutes, and you wish dearly for Scotland’s freedom to make its own decisions again, you’ll spot familiar tropes in this fabulous fable of skulduggery and sublimation. Handmaiden is a quiet lesson in the humiliation that is known as… submitting to colonial rule.