The Great Wall – a review

The Chinese invented paper, printing – block and moveable type, porcelain ceramics, lacquer, silk cloth, seed drills, iron ploughs, rice terraces, land cultivation, agriculture, fireworks, gunpowder, cannon, rockets, and military precision, the list is almost endless, but they needed Matt Damon to help them defeat thousands of murderous mythological beasts. No one else had the wit to figure out a plan, not even Confucius, though I’m sure he foresaw the coming of a pale rider.

The Great Wall is The Man Who Would Be King produced by Hollywood for the Chinese market. With a tonnage of talent aboard we get is a video game with a million monsters and some real actors. The by-line should be, (cue deep, gravelly voice-over) “How many beasts can a man kill with only one quiver of arrows, one sword, and a pony tail?”

I can imagine the boardroom scene.

The Great Wall is Matt Damon’s first foray into China, Zhang Yimou’s first English-language production, and the first film to come out of Legendary Pictures’ continent-hopping strategy, a production company bought by the Wanda Group of Chinese cinemas. The result is a whopping disappointment; in a nutshell: a hundred and one things to do on the Great Wall of China.

Sure, it’s engrossing, and everybody wears fantastic Italian fashion house designed body armour in matching colours, but it’s seriously tired fare, with a script a first year pupil could have written during his lunch break. There are half-a-dozen identifiable characters given lines – subtitled – one Chinese who speaks perfect English, with Damon and Pascal wearing dusty old leather jackets. Damon’s accent runs from Suffolk to Jersey to Californian and back again. He struggles with his dialogue, anachronistically peppered with modern vocabulary. One guy gets to say “bitch”. There’s some clunky humour, and bromanctic quips between himself, Pascal, and a completely lost Willem Dafoe held captured as the novelty westerner for twenty-five years.

They’ve travelled from Europe to China to bring home ‘black powder’, a magical explosive concoction they’ve heard about, better known as gun powder. Printing didn’t reach  Europe for 300 or more years yet the duo could have made heroes, fixed in the history books, for ‘inventing’ printing, instead our boys chose to bring home a sack of the crash-bang, wallop stuff.

How did this sappy epic get the green light? Money. Official co-productions are entitled to better revenue-sharing terms than imported films usually receive in China, 43 percent of after-tax ticket sales, instead of the usual 25 per cent, but there are onerous conditions attached. In exchange, they must feature large numbers of Chinese cast, employ high-level Chinese production crew, shoot in the country and tell a story involving Chinese cultural elements.

Given that North America and China are the largest movie distribution territories in the world, there are gargantuan profits to be made, but studios have found it daunting to meet the demands, while telling a story that straddles disparate cultures. The Great Wall fails at the starting gate.

Are you going to fire that thing or not? Well, are you?

Still, Damon has certainly lent the whole enterprise a certain class, and his presence, alongside Willem Dafoe and Chinese A-listers Andy Lau and Zhang Hanyu, should propel the film to box office success in China. For the international market, however, the film is best positioned as a novelty for monster-flick fanboys.

Using computer-generated images of the Great Wall, the film begins with short on-screen texts explaining that, as the wall enters its third millennium in existence, there are both facts and legends about it. “This is one of the legends,” the text reads, defending itself from the avalanche of  detractors throwing eggs at the stupid premise to follow.

The protagonist here is one William Garin, (Damon), who, while fleeing from the “hill tribes” in northern China, gets himself and his fellow mercenary Tovar, (Pedro Pascal of Game of Thrones) captured by a military garrison at one of the main outposts along the Great Wall.

With their claim that they’re just traders easily debunked, the pair’s lives are spared when William proffers a giant paw he chopped off from a beast that attacked him in the Steppes. His Chinese captors realise the  advance of the devouring beasts is upon them early, something that happens every sixty years – a completely arbitrary number – and could wipe out all Chinese civilisation and beyond. That’s is why the Chinese built the great wall, but no one twigs they would have been eaten at any time while building it. 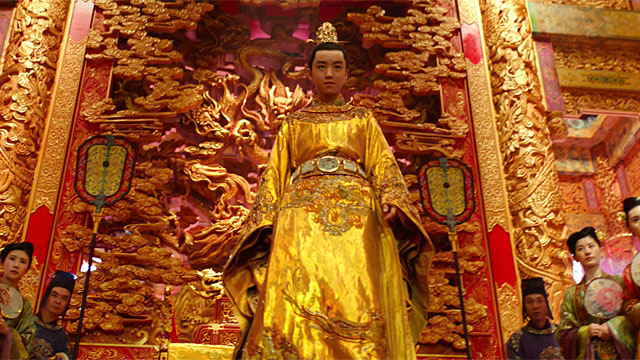 The Emperor as young boy – Bertolucci eat yer heart out

The monster, they are then told, is a Taotie – yes, I had to look up this drivel in IMDB to check my facts – a deadly lizard-like paranormal species.

Having saved a soldier in the battle and showcased his archery skills, William is welcomed into the life of the garrison. That was easy the easy bit. Now for the food and the wenching.

But this is a film for the Chinese market, so strict codes of conduct are enforced. People who lust after each other can only smile longingly. Initially bent on getting what he wants, his conscience is soon awakened, (this is Matt Damon, after all), and his head turned by Lin (Jing Tian), the only female English-speaking commander at the outpost, and not a single instance of sexual harassment or wolf whistle.

Damon on set looking bored, and Yimou looking for the exit

There’s also a moral message, which I forget, something about trust, anyhow, the banality of this moral is representative of the weightlessness of nearly every aspect of the plot, the staging and the action sequences.

I haven’t touched on the sheer lack of logic in the film: Why do the Taoties only attack humans every 60 years? Why does the army host a “crane corps,” involving female soldiers bungee-jumping down the wall to lance the beasts, when there are cannons and other artillery? Why does no one sleep? Why is William not called Jason Bourne?

Then again, Zhang Yimou might have delivered exactly what was asked of him, a no-nonsense visual spectacle that stops at nothing in its portrayal of an imaginary, mysterious ancient culture. I’ll give it the benefit of the doubt and conjecture they decided to make it as a starter, and then concentrate on something better with more time to think about it. It’s new terrain, so one step at a time, lads. But it’s no creative breakthrough.

Damon has come in for a lot of stick for choosing a role as an American lead in a Chinese film, but he’s weathered the storm of criticism. He argues his character “was always intended to be European,” and emphasizes the collaborative nature of the project,  planned to fuse Hollywood and Chinese star power. “That whole idea of whitewashing, I take that very seriously,” he said, during a press conference in Beijing.

Remember this is a movie made by Zhang Yimou, a master directors, one-time lover of the mesmerising Gong Li, scourge of the dead hand of Chinese bureaucracy, maker of visually exciting, wondrous epics such as Red Sorghum, (1987) Raise the Red Lantern, (1991) and House of Flying Daggers, (2004).

It ought to be a sure fire winner, but for all its whistling arrows, zinging spears, and fiery explosions it’s a damp squib. Beyond the casting and the ceaseless onslaught of diverse special effects, Zhang and his Hollywood screenwriters have delivered nothing more than a formulaic monster movie.

8 Responses to The Great Wall – a review