This is one bleak, violent movie. And a superb psychological crime thriller.

There is a sequence a few minutes past the opening titles of a family harassed by thugs on a lonely Texan desert road in the night. Writer and director Tom Ford directs the scene with the skilled real-time pace it demands to wrack up the tension, with the result every  word spoken, every fearful gesture made, makes you flinch. You avert your gaze. You can hardly watch it for you know its outcome full well.

At the very start of the film there is a misjudged scene – the only fault in the film, set in an art gallery, a commercial modern art gallery not obvious at first glance. Grotesquely fat naked women dance and undulate in slow motion. The film is based on the 1993 pulp novel Tony and Susan by Austin Wright. I am reliably informed the art gallery scene is not part of the novel. In the novel the female lead, played by Amy Adams, is a university lecturer. That makes better sense when she rejects her first husband’s attempts at writing a novel.

Lifting the naked images from the film gives a striking image in its own context. It stays in the mind long after the film is over. Placed at the start of the film it has absolutely no relevance to what goes after, other than to show Susan feels conceptual art, a la the British ‘living sculptures’ Gilbert and George, is fraudulent art, not art at all. (She has a point!) Tom Ford adapted the novel to screenplay, so the fault is his.

Incidentally, the fat women make cameo appearances later in the film at a diner. See if you can spot them. Their earlier appearance is an outrageous attention grabber. 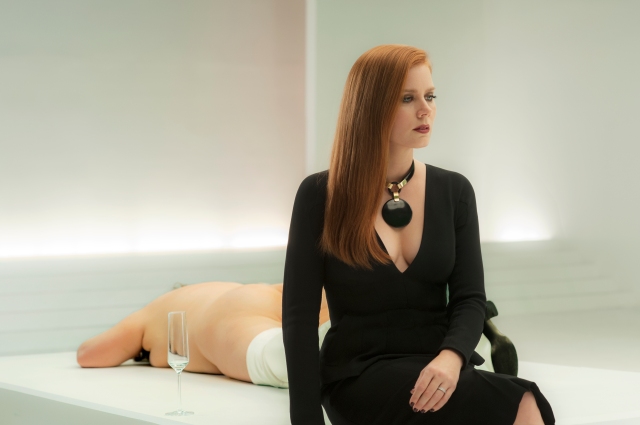 Tom Ford, fashion designer and purveyor of perfume co-produces and directs this story, his second film, clearly with some meaning for himself. It had meaning for the Venice Film Festival, too. It won the Grand Jury Prize. In a recent interview Ford said:

“Money doesn’t insulate you from loneliness. Some people think that it does, and that loneliness within the wealthy is all relative. I think it’s part of the human condition and occurs whether you are rich or poor. Susan lives the somewhat rarefied world of Los Angeles. I’ve fashioned a cautionary tale about coming to terms with the choices we make and the life that leaves us with”.

Susan, a woman with a materially rich but emotionally poor life, is sent a manuscript – called ‘Nocturnal Animals’, written by her ex-husband, played by the ever improving and watchable Jake Gyllenhaal. The draft is a page turner, as they say in Hollywood. She is  consumed by the story within a story, as the violent and deadly plot of the book she is reading forces her to confront her own choices. Her memory is activated to her time with her first husband, Edward, twenty years earlier, a brief marriage.

That story within a story is expertly handed by Ford as he juggles with the fictional side set against the real-life side, and how one affects the other. There is a mature sense of visual and narrative skill on display. And indeed, in landscape shots, urban or wilderness, the film looks quite beautiful much of the time, elegant when Ford turns to close-ups concentrating on the inner life of his characters. The camera assists us observe motivation. Ford is a natural filmmaker.

Jake Gyllenhaal has a fine time playing two roles, the first husband, Edward, and the fictional husband, Tony, managing to show a difference between each, and yet, and yet a shared riven inability to do the right thing when it really matters.

Michael Shannon gives an excellent interpretation of Marlboro Man, a hard drinking, hard smoking Texan sheriff coughing his lungs up while trying to solve the case. A strict rule of Hollywood film scripts is, any character coughing in the first reel will be very ill by the second reel, and dead by the last. Please be advised.

Aaron Taylor-Johnson is evil personified, horrifying and grisly. Whenever he is on screen you want to reach for a gun and blow he head off, or better still, one limb at a time.

We have seen his type before on the screen. The length of time Ford depicts his horrifying crime makes it work above the stereotype. In one brief close-up, attacked by detective and husband yet unmoved, Taylor-Johnson narrows his eyes, keeping his head lowered, confirming he is the devil incarnate. The performance is a well-controlled rendering of sect serial killer Charles Manson. Helter-skelter!

Both actors deserve nominations for Best Supporting Actor at the next Academy Awards.

For female cinemagoers who brave the brutal scenes – my large cinema was all but empty – Susan is the character in which they will identify. The camera buries into Amy Adams head, gets behind her eyes. We witness her at an intimate distance. Without a word spoken she expresses betrayal by her second husband who is having an affair, a fact given away by a stray remark from an elevator attendant. We see her slowly, gradually, realise her life is empty and shudder at the emptiness.

The one person who showed her unquestioning, uncompromising love and affection, she let slip from her embrace. She has a materially impeccable life, a home straight out of million dollar Contemporary Homes. She is admired by friends and colleagues always at a distance, but she’s stone cold inside. As she drives home late at night, bewildered by what the day has brought to her notice, the headlight glare bouncing off her polished steel gates dazzling her; just one small flaw in her architecturally perfect life.

Ford suggests, “She has made the mistake of letting go of her true soulmate, and by reading his novel, it not only makes her fall in love with him all over again, it’s his way of making her realise what she did to him. One of the themes of the film that hit home personally for me was the exploration of masculinity in our culture. As a boy growing up in Texas, I was anything but what was considered classically masculine. I think it’s important to write about what you know and I know that part of the world well.”

The main focus of the film is loyalty – to find the people in your life that matter to you, and to keep holding on to them. Then again, I defy any person to reach a late stage in their life and not have a regret about something, a friendship, a wrong decision over a loved one that had profound meaning.

The film is dark and wicked, and often painful to watch. As a thriller Nocturnal Animals is a revenge western. You could call it Death Wish meets Merchant and Ivory. In its entirety if proves Ford is more than a mere stylist.

The draft novel sent to Susan is saying “I hate you! This is what you did to me and now what I do to you”. But at the back of my mind is nagging doubt about Ford’s intentions in the way he interprets a woman’s inner uncertainties. I’m left wondering if Tom Ford likes the female of the species. It doesn’t seem so. Not one bit, sir.

2 Responses to Nocturnal Animals – a review