I Daniel Blake – a review

There is a masterful high point in I Daniel Blake, when, after spray can painting a plea to welfare benefit staff on the wall of their building, Blake, nicely underplayed by Dave Johns, gets cheered on by a down-and-out inebriated Scotsman. (It’s always a Scotsman, is it not?) The moment has the cinema audience cheering with the Scotsman.

We cheer because we perceive a searing moment of truth that we have met in the chewing gum and urine soiled streets of so-called wealthy Britain. It lifts the film from episodic documentary-style storytelling to high drama. You understand why it won the prestigious Palme D’Or this year, and against some really tough competition.

The Scotsman raises Daniel’s arm high, like a boxing champ, to proclaim him a hero to the assembled, applauding crowd in the street. When the police arrive he continues berating the government – a marker for direct action – and the whole class of elite politicians.

In the same scene the same Scotsman derides a Tory architect of the new brutal welfare system, “That baldy twat Ian Duncan Whatsisname!” In a subsequent television interview the former Work and Pensions Secretary Ian Duncan Smith said this:

“While on one level this was a human story, full of pathos and difficulty, I did think that the film has taken the very worst of anything that can ever happen to anybody, lumped it all together, and said ‘this is life’… And I don’t believe that.”

To be candid, for that piece of brazen hypocrisy, and his vain, conceited, wooden-headed stupidity, I probably would have slugged Smith there and then, had I been in the studio when he uttered his self-serving defence of all the deaths and misery his policies and that of his chums have caused. His comments guarantee to cause the most laid-back, cool-headed observer to cross his personal line and throw a punch.

From Kes to Blake

When first I saw Kes I thought it a small masterpiece. I took friends to see it and they felt the same. Television broadcasts have not changed my mind. The combination of committed socialist writer Barry Hines and socially conscious director Ken Loach’s understanding of the hopelessness of poverty, signalled the arrival of two large talents in the film industry. Hines died young, but Loach has continued into old age, and like Clint Eastwood, still directing.

I have a problem with Loach; I’ve never been convinced he has a visual eye, or an instinct for drama. The Wind that Shakes the Barley (2006) attempted lyricism but its images don’t sustain, and it falls short of any intense human drama. (The film is his other Palme D’Or winner.) Loach’s storylines are invariably didactic, dialogue often plodding, with too much exposition and not enough symbolism, faults that don’t class Loach as a great filmmaker, only a very interesting one, one with unassailable integrity.

What this film proves is Loach is at his best when tackling a simple story in a straight-forward manner. And so it is with I, Daniel Blake. The neo-realist Bicycle Thieves it ain’t, nor is it Umberto D,but it does manage to pack a powerful punch, to quote a cliché.

Always on the prosaic side

The main problem here is the need for characters to explain the deliberately intricate and arcane complexities of Britain’s welfare system, a system created to put claimants off attaining financial support.

There are protocols, sanctions, and multiple paged documents to negotiate, a severe headache for an honours student let alone a pensioner who has never used a computer in his life. Loach’s long-time colleague, Paul Laverty shares those lines amongst the main characters, conscious that to give them all to Blake will bore. 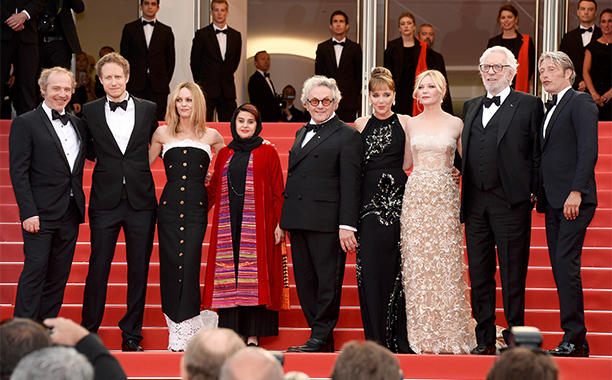 The story so far

Daniel Blake is a man in the autumn of his days, hampered by a recent heart attack, newly a widower, living in a Newcastle tenement block. We see his daily life, meetings friends, doing a little shopping,  seeking  social security, dealing with neighbours, and befriending a single mother, Katie, relocated by necessity from London after spending two years in a homeless garret, coping with two young children and no money to feed them.

Seeing the mother, beautifully played by Hayley Squires, humiliated by welfare staff, Daniel befriends her and, a carpenter to trade, sets about keeping her meagre lodgings and children together.

Beaten by her own clashes with the job centre, Katie goes without food and basic necessities to take care of her kids, eventually pushing her to make heart-breaking choices. This gives Laverty the opportunity to recreate a poignant scene in a food bank, one which I can testify is absolutely accurate, even if the callous Ian Duncan Smith would have us believe otherwise.

The film is criticised for portraying welfare staff as unsympathetic and overly-bureaucratic. This is untrue. The film is pin-point accurate.

The Job Centre is staffed by people who do things by the book because they have to, they have minders watching them. None can make a decision. Decisions are made by the unseen ominous ‘Decision Maker’, presumably a nod to Orwell’s big brother.

There is one kindly woman, (my experience too!) played by Kate Rutter. She goes out of her way to help Blake having seen the outcome of too many rejected by the very state that promised to protect from cradle to the grave. The topography is a familiar one for Loach. Blake is surrounded by despair and the black market, people whose resilience is fortified by a rough joke and a pint of cheap beer.

A career lauded at its end

For a stumbling filmmaker like myself Loach’s oeuvre stands as a fine example of consistency of output and quality of accomplishment. He has to be admired no matter if your politics are at the opposite end of the spectrum. For more than fifty years, Ken Loach has been making social-realist dramas on a single theme that has never changed because for all our elected representatives’ promises, society has not changed for the better.

Loach embodies the compassionate observation of the struggles of the working class to hold onto such fundamental necessities as a home, a job, and above all, their dignity. Watching his characters get beaten by the system reminds us that there by the grace of god go we. Or perhaps, there by hard grind and sheer luck we emerge.

Loach claims this is his last feature. One thing has always made me curious. At the worst times of Tory extremism the best English socialist filmmakers are able to sustain a career. Loach managed quite brilliantly, as did John McGrath in his day under Thatcher’s iron rule.  But that conundrum is one for film historians to figure.

Clunky plots twists and all, I, Daniel Blake is quintessential Loach, however the humanity of the subject matter defies a star rating. I can only recommend it. Highly.

2 Responses to I Daniel Blake – a review