AN OPEN LETTER TO THE GLASGOW SCHOOL OF ART AUTHORITIES

The destruction by fire of the Glasgow School of Art’s world renowned Mackintosh building is an act of vandalism. The question remains unanswered: why was gross negligence passed off as an accident? 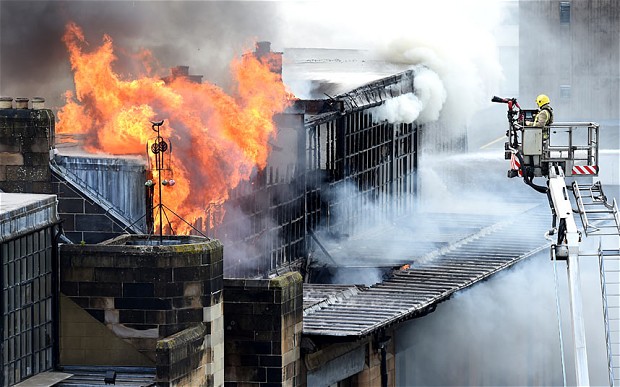 How did the fire start?

The first fire was caused by a degree student’s ‘installation’. (I’ll discuss installations shortly.) It started when ‘flammable gases from a foam canister used in a student project were ignited’, according to a report by the Scottish Fire and Rescue Service.

The report concludes that the blaze began in the basement when a film projector caught fire igniting gases from the expanding foam and took hold quickly through gaps in the walls. Old ventilation ducts assisted its spread into neighbouring studios and upwards through the building. The cause of the second catastrophic fire has yet to be determined. The authorities who presided over both conflagrations still run the school. They should resign.

The student work in question was foam panels fastened to three walls, with one wall left blank to receive images from a projector. At the time of the incident, visible gaps between the panels were being filled by applying expanding foam from a canister. Readers will note there is no mention of classical art materials such as pencil, paper or paint yet this was in the Painting and Drawing department. More of that later.

Mackintosh’s art school is regarding internationally as a world class building, a work of outstanding originality. The design has many European and Japanese influences yet its author’s genius was to integrate his sources into a whole that is truly Scottish in style. It was not built exactly as he designed it. The budget was kept low, materials skimped.

The accomplishment is remarkable. The interior does exactly what it was intended to do – give inspirational space to budding artists and sculptors, together with exhibition space, a library, and office space for administrators. To work there was uplifting.

Philistines regard art as a frippery. The French with the Louvre and their love of art are mystified at our attitude. To them as with Italians and Germans, art is the very expression, the embodiment of a nation’s soul. Primitive man understood the power of art. He venerated galloping horses, antelope and bison on his cave wall and signed his work with a hand print.

The danger of smugness

I must declare an interest. When involved in the unsuccessful spearhead to save the Edinburgh College of Art and 300 years of its history sucked into Edinburgh University’s commercial objectives, (appropriation was a foregone conclusion) I had occasion to discuss that hapless Glasgow school’s predicament with a former director, Professor Dugald Cameron. We agree a university is wholly at odds with the ethos of a rebellious, rule breaking arts institution. I warned Professor Dugald that the GSA was next for radical reform. Professor Cameron felt the GSA was in safe hands.

Dundee and Aberdeen’s art schools are lost to their respective universities. Not a single art lecturer thinks the union beneficial. Their creative and curriculum independence is lost. I told Cameron to expect the GSA fashioned for corporate goals, perhaps architecture industrial design gaining precedence, drawing and painting definitely sidelined. Cameron expressed some anxiety but thought the GSA  on solid ground..

The Reid building – a monstrosity from an aesthetically illiterate architect

Where did the rot begin?

The rot began with the man at the top, in fact, a woman, Seona Reid, now Dame Seona Reid. She had moved from director of the now defunct Scottish Arts Council to director of the GSA. Colleagues considered her a good if rather dry bureaucrat dedicated to the job.

Pushed by the diktats of commerce and industry over fine art, plans for a new grandiose addition to the art school came to fruition under her watch. The ‘Reid’ building, as it came to be christened, a shrine to commercial design, proved a tragic diversion.

What we got was brutalism; an ugly edifice that consumes the Mackintosh and straddles a corner building like a predatory sea slug consumes a mussel. It did more than that; it sapped energy, attention, and finance that should have been put at the disposal of the Mackintosh building first.

Some blame is attached to those who employed Reid. It appears officials who work in arts institutions, from the shop assistant to the director, need have no artistic skill or vision. That is bad news.

Nor do they need an aesthetic education, though it helps. We assume they are creative because of their title, but they are invariably plain, old-school pen pushers and socialites. As for the Mackintosh, one must assume Reid knew its worth but not its value. Mackintosh’s school demanded priority. Under Reid that did not happen.

What is an installation?

At this point it’s worth defining what an ‘installation’ is, and why they’ve become fashionable causing art schools to dump life drawing, still life, and fine art in general.

To begin with graduates ‘artists’ – if we can still call them that – leave art school unable to do the basic – draw. They’ve been schooled in installations most of their student days.

An installation in epitome is, an artist gets up in the morning, has a ‘concept’, recruits friends to help gather the bits together and construct the idea, and then calls it a work of art. Installations can take many forms: a thousand objects on a floor, a giant sock puppet, elements hung from a ceiling, or a video on a loop, and so on, and so forth. Much of it is ephemeral, a lot so large it needs a museum space to exhibit it.

Colleges encourage students to specialise in installations and enter them for national competitions. The result is a cynical public that scoffs at vast sums paid for tat with a title. One need only think of Damien Hirst’s preposterous cow in formaldehyde. You don’t need expensive art materials, oils, inks, acrylics, canvas, or framing. Encouraging students to create installations saves art colleges the cost of art materials. The GSA did exactly that. This policy had a direct bearing on the catastrophe.

The man who mistook a crime for an accident

Professor Tom Inns, Reid’s successor, appears not to have foreseen the urgency to install smoke alarms or water sprinklers. Nor does he seem to have dictated better and safer working standards from his students.

Professor Inns is in the same category as Reid, an administrator. He studied engineering not painting or fine art. He was given charge of one of the world’s greatest art schools. His excuse for the fire is deplorable.

Ten questions that must be answered

Where does the buck stop?

One: The director of the GSA and the governors failed to protect a world heritage building of international importance. Board members such as the broadcaster Muriel Gray, chair of the Board of Governors, expressed deep sadness at events, but like her colleagues she failed to shield Mackintosh’s irreplaceable work. Nobody has resigned.

Two: Students were so indifferent to their surroundings they utilised flammable material with impunity. It was not the first case to occur. Flouting the rules was endemic.

Three: The GSA is a self-governing authority; it makes its own decisions on needs, hence it’s hard to blame government meanness for indirectly causing the fire by delayed grant aid. Nevertheless, why did it take so long for a sprinkler system to be approved?

The talk is of turning the Mackintosh into a museum, or at the most, allowing access to students with laptops, which is the same thing, the antithesis of what Charles Rennie Mackintosh created for its use. After destroying his legacy we abuse his memory.

Mackintosh’s masterpiece cannot be ‘restored.’ It can only be imprecisely recreated. Unique items, fitments, interiors and windows, designed by and made under the artistic eye of Mackintosh, will be bogus, mere copies.

The original is all but gone. No one has apologised, no one has resigned, and nobody has been charged with negligence. Why? And where is the guarantee no other disaster will befall this great national asset while under the ‘guardianship’ of the present Board of Governors? Dare we contemplate privatisation, vandalism, or another fire?

What a disaster! Now we have a second fire as if somebody is determined to level the building once and for all. Poor storage of construction materials? Blatant disregard for health and safety regulations? Arson? Will the GSA authorities stand down this time, or wring their hands and say yet again “We have learned from the mistakes”. Bit late to have learned anything when the bloody building is all but lost.