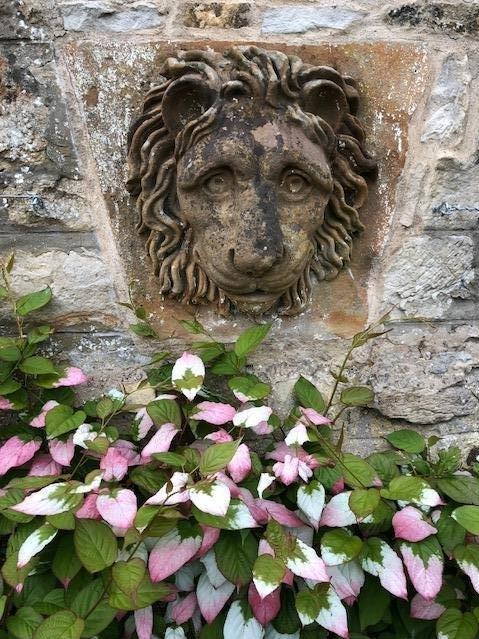 A bit of my Roman garden in construction with Mournful Lion

I’ve a word or two to say about JK Rowling, but first…

I’m taking a short break. Grouse Beater will return at the end of the month unless a miracle happens and the British government capitulates to democracy and admits Scotland should and will be independent again. In any event, unlike some of the MSM’s puerile pundits, I don’t have an opinion on everything, only on Scotland’s loss of constitutional justice, and how big business is stealing our democracy. Oh, and films.

I’d like to enjoy the prolonged Mediterranean weather we’re having and attend to the Roman garden I am trying to recreate. The other reason is I’m ruining my eyesight. Working my normal day and then burning the candle at both ends until two in the morning dims daylight. Researching facts and quotations and staring at a bright computer screen in the half-darkness all for essays on independence is blighting my once 20×20 vision. I used to be able to read a bus’s route number from one end of Princes Street while it sat at the other. Now I can barely make out if a bus is approaching.

One should be insightful. People at my modest end of The Cause don’t get official thanks when full self-governance is reinstated. (There’s at least a dozen essays would have me precluded from standing as an SNP candidate.) Some readers will give effort a nod when I finally sign off, but there’s no special praise reserved by the state to be presented by Nicola Sturgeon on behalf of Scotland. Wise to pace oneself.

When I left the Scottish national theatre I had created for new talent that helped thousands of Scots escape poverty, the mean spirited board of directors ‘forgot’ to send an invitation to the following productions, ungracious to a man and without a bloody education in generosity. My wife, Scotland’s former British Junior Fencing champion, (Foil) was removed from the List of Honours by men she beat in competition.

So I’m taking a well-deserved break and there’s nothing ‘yous’ can do about it. I trust I won’t lose any readers. There’s lots of informative and entertaining essays from my archives to read you might have missed.

In the meantime, readers should know I confronted the fragrant JK Rowling’s preposterous, disreputable attempt to needle adherents of civil rights. Here’s her tweet:

“Some of us are getting mighty tired of Scottish nationalist insistence that their nationalism is nothing like the other, nasty kinds, in the face of considerable evidence to the contrary.” JK Rowling

‘Mighty’ is a word Sigmund Freud could have pointed out as a subconscious slip. Her comment is a deliberate exaggeration, of course, designed to misinform in the JK tradition. Some of the ‘nasty’ nationalist remarks are phony accounts, hence could be English, ‘Merican, or a Rangers fan. She doesn’t care, they serve her purpose.

She’s indulging in the troll’s tactic of insulting an entire group stupidly turning the particular into the general so she can claim their indignation is evidence they are a repulsive people. I responded with this:

“Dear JK, There are over 350,000 English happily domiciled in Scotland, some here for “a better environment”, rather like your self. Some are SNP members, or MSPs, some support full self-governance without being an SNP member. Are you claiming they as well as Scots are gullible or hostile?”

Rowling is not only a writer. We should treat her for what she is, boss woman, CEO of an international corporation selling books, films, plays, toys, trashy goods and the like, an industry intent on removing the rights of workers.

The world out there

The heat we are experiencing reminds me of the talented street musician below seen in Los Angeles, city of dreams and fallen angels, worth reposting for your enjoyment while I ponder on life, love and this sick universe. Click on the link below to hear an amazing Mexican guitar player.

If  no new essay when you return, play it again.

7 Responses to On Holiday