Bridge of Spies – a review

Those hoping for some polemic against the enemies of Scotland will be disappointed. This isn’t a treatise on GCHQ’s goons counselling against the SNP over wear and tear to the Forth Road Bridge. It’s a review of Spielberg’s latest film, Bridge of Spies, one of his best for a long time. He just about manages to avoid the sickly sentimentalism that infests most of his interpretations.

In historical fact, Abel was traded for spy plane pilot Gary Powers in East Berlin, the city where much of the action takes place. The film adds a third character to the trading plot, a bit of a digression from historical actuality, a naïve American student, but not how Donovan went on to rescue American prisoners from Cuba after Kennedy’s fiasco of the Bay of Pigs invasion.

If Hanks is ordinary man depicted as family and company man, Rylance gives us ordinary man as invisible man, the very substance of espionage. No gleaming silver Aston Martin for him. Only a subway train.

It has an intelligent screenplay originated by Mark Charman, who pitched the idea down the phone to an enraptured Spielberg – Hollywood moments do happen – a script augmented by the Coen Brothers. The quirky nuances in looks and delivery and irony have to be their signature insertion.

This film’s main character’s are two men who go about their daily lives ‘doing their job’ with equal honesty and loyalty. We get to see their home lives and their commitment to upholding sound political values. In quality and pace, though not plot, it reminds me a lot of Coppola’s 1997 insurance film The Rainmaker, with Matt Damon, a film where all the little people are kept equally in sharp focus.

Standing on the Glienicke Bridge of the title, the bridge where the spy swap is to take place, Donovan is alarmed to spot German snipers on the other end point rifles at him. His CIA handler points to those on our side. Eastern Bloc communism and western democracy are show to be mirror images: two gun nests, two prisoners, two sides that stoke fear in their people by calling one another the enemy.

What this film is, is a low-key, well paced story without James Bond over-the-top implausible action. One might say it’s deliberately sombre, as in thoughtful, engrossing, without artifice. 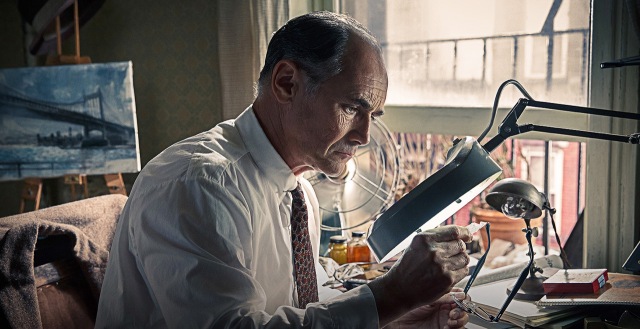 The storyline is based on the true incident when the Soviets downed an American U2 spy plane flying over the USSR and embarrassed the US government who lied that such things existed. The pilot was Gary Powers. The plot is based on that incident in the same way Braveheart is based on the events of William Wallace, meaning there’s a fair amount of creative licence in dialogue and events. (Except somebody to pop up any day soon claiming it’s all a lot of hooey.)

What Spielberg is aiming at, I think, with this ultra-subtle enactment is for us to notice the similarities between the 1950s and today’s terrorist events. American U-2s are now our drones; we torture enemies for intelligence; and the crazy demagogues here and in the USA in the Fifties are carbon copies of the same shrieking all over the media and Internet about how much our existence is doomed unless we bomb the hell out of small nations. 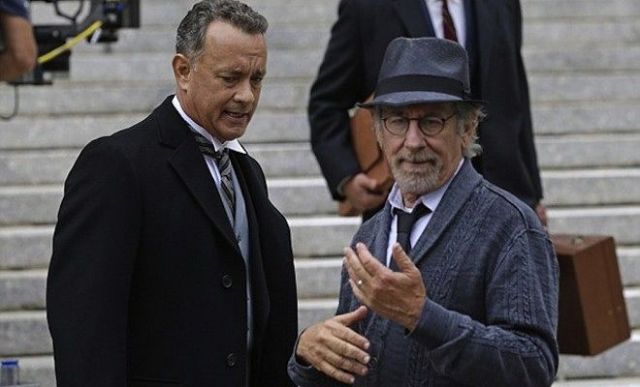 Spielberg offers a few tips on where to look

Spielberg gave up on art house films very early in his career, considering them box office poison and career finishers. Here he gives us another commercial concoction but with the space and grace and human observation of an art film. He has with him his ace master cinematographer, Janusz Kaminski. The scenes are shot in icy blue tones befitting East and West Berlin in the grip of icy winter.

With this tale of patriotism on both sides of the ideological divide he shows us something of his political fears. He reveals cold war paranoia for all the stupidity that it is, but in a suitable low-key manner. We are asked to read between the shots, so to speak. Abel tells Donovan of a man he knew who ‘stood up’ every time he was beaten to the ground. It made me think of Scotland’s bid to regain dignity.

If anything, the film is about treating people with respect, even those we find decidedly odd. Coincidentally, the real event happened in the same year as Harper Lee’s To Kill a Mockingbird was published.

Spielberg’s message is, better to build bridges than to blow them up.

2 Responses to Bridge of Spies – a review