Posted on September 7, 2015 by Grouse Beater 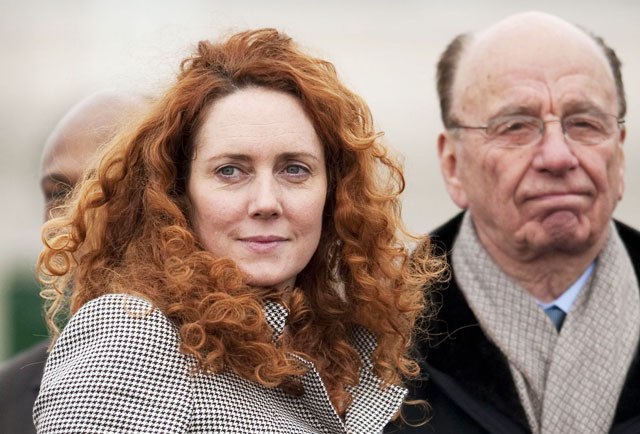 Belladonna is back, the Belladona of black print.

In Italian it means a beautiful lady; in English a deadly poison.

Rupert Murdoch has seeded deadly nightshade into an old high-powered job but with added toxins – She is Chief Executive of News UK, formerly New International. Not only is Murdoch giving the public and judiciary two fingers, and laughing at the Establishment, (the one that keeps telling us he loathes) he gives us all a bare-arsed moony into the bargain. The newspaper magnate writ gigantic.

Brooks was cleared of all charges relating to News International hacking, corrupt payments and allegations of the perversion of the course of justice. Within months she was back with Murdoch in New York, in a consultancy role. What loyalty. What an honour.

Rebekah Brooks is the Belladonna who ordered the deletion of millions of emails on News International servers. Millions. A jury at the Old Bailey heard ninety million were recovered from the company’s system but many millions were lost either by accident or deliberate policy. So, a partial success. Look upon the perfidious act as a gardener might killing a lawn of weeds.  Some never return, some persist and regrow.

Brooks is free again to exercise what she is good at, threaten anybody with reputation wipe-out who dares challenge her empire’s assertions and allegations. And she is able to organise sweet soirées again for England’s power elite at Chipping Norton where she has a home, gatherings that include prime minister Cameron, and his predecessor at Number 10, Gordon Brown, with whom she was just as cosy.

Smooze and booze and flaky news.

News International – pouring a little sewage into your system every day.

“How clean do you feel?” asks the Andrex television commercial, full of giggly children. As clean as a squid,” answers one cute kid, “As clean as gold pants”, says another.

What are we to make of Atropa Belladonna? Put aside comments from colleagues and those at the sharp end of her attacks that she is a “ruthless operator”. Forget she was a showbiz reporter who must have demonstrated qualities way beyond her experience to gain high office so fast. Ignore any thought that as a junior employee she had to witness or overhear fellow reporters hacking celebrity’s telephones at some time or other, if hacking was normal business practice.

Dismiss the obvious, that the content of many an exposé, though intent clear to a blind drunk judge, was culled from intimate conversations no one could access unless the actual recipient of the those conversations.

Erase any thoughts of that illness of old men marvellously amplified by Picasso’s many affairs transcribed to his drawings and portraits. Do not consider Brooks is Murdoch’s muse, an aging sacred monster fearful of his waning sexual potency obsessed with a young woman. Though the artist-muse metaphor might have legs, (excuse the pun) knowing Murdoch bought her a Lowry for her 40th birthday, it is irrelevant. Think of the relationship as father with surrogate daughter.

Assume she is genuinely uncomplicated, honest, straight-forward, a competent editor, open and refreshingly direct, as ideally editors should be. (Sardonic humour) In which case we arrive at two possible conclusions, the only two.

The first is, she was so inept as an executive she never questioned how or where her journalists got their stories. And she never asked for irrefutable verification. Assessing character, and ensuring staff work by strict ethical and lawful rules – nothing gets published without at least two written affidavits of authentication – is the minimum due diligence a newspaper editor must demand to avoid litigation, or accuse the innocent. That scenario leads us to believe she was not fit for the role of editor.

The remaining conclusion is exponentially worse.

Nothing quite explains how Brooks managed to hold on to her job when Murdoch himself was crying ‘mea culpa’ before getting a cream pie plonked in his face. His well-rehearsed outburst, “This is the most humble day of my life”, was a master stroke only Citizen Kane could conjure – the perfect headline to hog the news next day, but an admission of repeated transgressions, all the same.

If we assume Brooks knew of all or most of what was par for the course in securing news by her journalists, but chose to overlook it, either because she approved the practice, greater sales boosting her own kudos, or she was weak and held back from sanctioning aberrant behaviour, we still arrive at the conclusion she is inept, unfit for her post, but in this scenario inept and dishonest.

Nevertheless, she has been re-instated.

How clean does Brooks feel? As clean as a deleted e-mail?

And when we mix into the flow of corruption that accompanies a newspaper in league with crooked government, flaky politicians, and bent police, a major scandal a week, and yet we the voter elect the same politicians for another term in office, we have to ask ourselves how clean do we feel?

Ms Brooks keeps her job with five gold stars and a Michelin recommendation. All the staff of the News of the World lost theirs. News UK is now a squeaky clean machine, even if, perhaps, Brooks bathes in a tub with a permanent ring of scum around its perimeter.

Her memo to staff on her return ends with the customary offer of an open door: “Please feel free to ask me any questions and share any creative thoughts or ideas you have for the future.” Imagine the note slipped furtively under her office door, but late at night. “Welcome back. Please join our Wicker Man celebration – as our very special guest.”

Trouble ahead for Rebekah Brooks.

Mark Hanna, former head of security for Brooks, a man very close to the king-maker and his hand maiden, warns he will blow the whistle on Murdoch’s UK newspapers. He has a grudge. Brooks is back with a bang and a clean pair of pantyhose. She was given a golden handshake to go away, a reputed £16 million. (There’s serious gold pants, for you.) Hanna got a redundancy cheque for £30,000. Which of the two harbours the most secrets?

The next instalment of Brookside might be the most watchable yet.