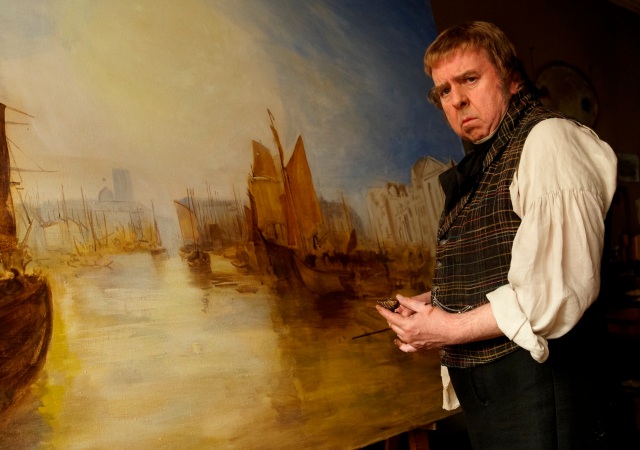 Mr Turner in the guise of Timothy Spall

A warning for readers: I touch upon the ending of this well-publicised movie; those yet to see it might wish to stop reading now.

Mr. Turner comes from the stable of English director, Mike Leigh. In his latest creation he attempts a thorough, warts-and-all portrait of the painter and Royal Academician, Joseph Mallard William Turner.

It is good to see a film about a British painter for once rather than a European artist, or an American one steeped in factory editions of pop art and booze.

Turner takes its time to build up a portrait of a gifted man totally dedicated to his craft, an artist well-ahead of his time and his contemporaries.

Leigh made his reputation in theatre and then television working from a basic template of plot, improvising the dialogue with his actors over a period of months until he had a fully formed play. Too often the result is characters as stereotypes, fine if a stage play where high theatricality is expected to help illuminate the foibles of human nature and squeeze comedy out of the situations, less plausible when faced with the intimacy of a camera lens. But every now and then he hits it about right with his subject. The last time he managed to fashion a believable harmonious whole, in my opinion, was the story of the business and creative relationship between composer and lyricist, Gilbert and Sullivan, in Topsy Turvey, a film charting their joint musical productions.

The devil’s in the detail

It is impossible to fault the attention to detail in Turner, in splendid costumes, inanimate objects, bric-a-brac, streets and alley scenes, Margate front, and the manners of the day. Oh, and dust, lots of it. Dust and dirt everywhere in days before invention of the hoover.

I enjoyed the dialogue; it rang true for me, many a line deliciously uttered, quotable too: “Brook thy ire, sir!” Another, spoken on a rowing boat with friends as the Fighting Temeraire is pulled into dock for breaking up, “There’s a subject for your canvas, Turner!” “Aye, well, I will cogitate upon it, sir,” says Turner, letting his companion know by the tone of his voice only Turner chooses Turner’s subject matter.

I enjoyed most of all the affectionate and admiring relationship between Turner and his father, the latter a retired barber, now living vicariously in the footsteps of his son’s success, caring and sharing his days to help his famous son work without distraction by buying and preparing his paints, and canvases, and looking after prospective collectors and buyers. There were moments their affection had me moved to tears. 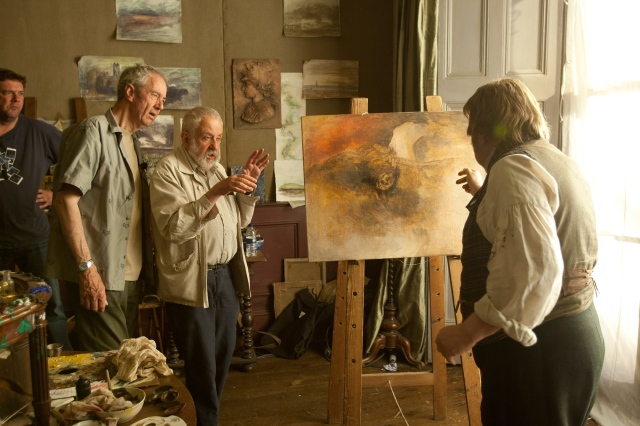 The film, shot by Leigh’s old collaborator, cinematographer, Dick Pope, is a delight to the eye, pure pleasure to behold on the wide-screen, heat from the film’s sun basking us in its light enough to make us forget outside the cinema the nights are closing in. Each shot is carefully composed to resemble either a Turner painting, or what the practised painterly eye of Turner sees that the rest of us miss.

Timothy Spall’s minutely realised interpretation of the driven, curmudgeonly visionary is wonderful, a long, infinitely varied series of grunts, snorts, growls, harrumphs, non-verbal utterances, and guttural barks. Though there were instances Spall’s monologues were incomprehensible, too garbled, I really want to believe that what he gave us was the actual Turner. In terms of film awards, Spall has to be nominated for an Oscar, and might find he is in the company of the equally talented Dick Pope.

Once we see Turner’s father die and witness his son’s despair the film, for me at least, tails off, and at over two-and-half hours tailing off took the remaining half of the story, still eminently watchable, but without dramatic resolution or surprise. What we are given could just as easily be reduced to a single hour, including Turner’s dementia, final words and his deathbed scene. What keeps us in our seat is Spall’s mesmeric acting.

Where the film falls down is in the hackneyed depiction of a great artist. Once again movie-makers have plumped for the social and love life of the artist, the obsessions, the erotica and the inhibitions, the chaotic domestic life, the cruelties, dismissing loyal spouses and close friends, the violent disputes with contemporaries. The women around are, for the most part, abandoned, abused, or ignored, the most pathetic his house servant, a woman who waits eternally for her master’s commitment that never comes.

The film has no narrative, it is episodic, though scenes from his life appear to be in chronological order. However, the most frustrating omission is any creative reasoning for his artistic view of his world. We see Turner sketch often, paint, fine hone the images that grab his imagination, but not why.

Films about artists are always the same

Thus we see Turner crushingly awkward and clumsy in his love-making – there were times I thought I was watching a rerun in fancy dress of another story of buttoned-up English emotions, Ishiguro’s, The Remains of the Day. We see his dislike of academician colleague John Constable, a romantic painter. We are welcomed into Turner’s social circle. There is pre-eminent art critic John Ruskin, his most ardent supporter, the one man who recognised Turner’s unique technical powers, reduced bizarrely to a pompous fop. Why?

What we don’t get to see and to understand is why Turner was so far-sighted in comparison with his contemporaries, a modernist well-before his time. We are left in ignorance subject matter was secondary, his fascination was with the atmospheric, with light and mood, over-riding everything else.

We are offered glimpses at recorded incidents of Turner’s audacity of improvisation, when he paints a red buoy into one of his marinescapes as it hangs in the Royal Academy. And we see severe Queen Victoria and Prince Albert attending a Royal Academy Summer Show wondering, aghast, make leaden comment Duke of Edinburgh fashion at the impressionistic work before her, asking rhetorically if Turner has lost his eyesight or his senses because his paintings are “indecipherable, a complete blur,” while Turner hides behind a door over-hearing the Royal remarks thinking his days numbered.

One other matter: I saw the film in the presence of another Royal Academician painter not slow to spot flubs and inaccuracies. Turner, a master draughtsman, created thousands of accomplished watercolours, his sketchbooks, only the best paper, leather-bound, now held by the Tate, but we never see Turner create a single one. Nor would he have sketched using a modern crayon pencil, which we see him do at every turn.

To understand what Turner’s art was about you need to bone up on his artistic development and bring that knowledge to the film. There is absolutely no explanation or illustration of his supremely advanced innovation and improvisational ability. One moment we see Turner transfixed as an early steam locomotive passes by in sylvan surroundings, the next he is painting it from memory, only it’s his masterly image of a broad-gauge locomotive passing over Brunel’s Maidenhead Bridge in a rainstorm. What is not clarified is what motivated him to choose that moment – an allegory of the forces of nature – and want to recreate it on canvas. We are left to assume he was inspired by the scene, and that’s it.  (Railways fascinated him, as well as light diffused by stack smoke.)

A true fact depicted is Turner refusing a very large sum of money from a collector, late in Turner’s life, for all his artwork not already bought. Turner left his personal collection, including all his notes, journals, and sketchbooks, thousands of them most in disarray, a bequest to the nation. For that generosity we should be eternally grateful.

So, in events we see of Turner’s private life and in the art techniques we see, and don’t see, the film is a disappointment, his closeness to his father excepted. It is another good opportunity lost to commercial conformity, and financier pressure, no doubt, to show nudity and some explicit sex at least twice in the story. (There are so many financing bodies and funders the first five minutes are devoted to tedious credits of them.) The film ends with a sentimental image of love lost, desolate and isolated, not exactly what Turner would have wished the filmmaker concentrate upon.

I said this film review would not be another diatribe against Scotland enemies, but I lied. I hope you will forgive this one aside: Can you recall the last time you saw a high quality filmed period melodrama about an internationally renowned Scottish-born painter?

Expecting one soon on Henry Raeburn? No? Wonderful thing, this Union of equals.

7 Responses to Mr. Turner – a review